On Sunday March 4 at 7:30am our tour guide Zvi Levran picks us up at our Tel Aviv airbnb.  We drive to Jerusalem for an old city tour which includes Mount of Olives, Via Dolorosa, view of Temple Mount from the Austrian Hospice, Western Wall, Southern Wall excavations, Arab Quarter, Jewish Quarter, Christian Quarter and Church of the Holy Sepulcher.  We started on the Mount of Olives with a beautiful view of the Temple Mount and the old city.

View of the old city from the Mount of Olives. 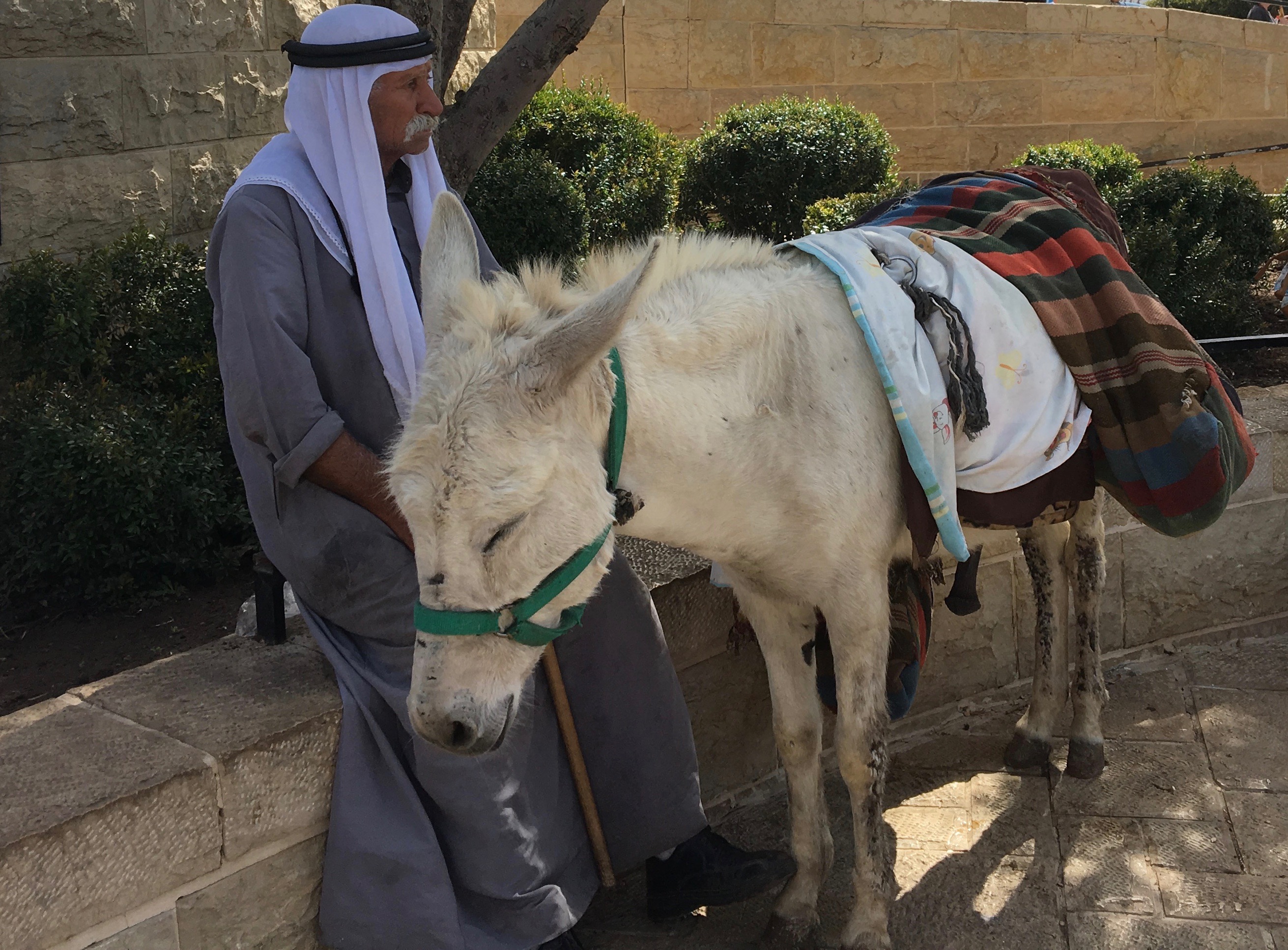 Western window of the Dominus Flevit tear shaped church offering a view of the city.  This is between the Mount of Olives and Gethsemane.

We then walked down the hill to the Garden of Gethsemane which is quite small and meticulously maintained.

Ancient olive trees in the Garden of Gethsemane with adjacent church in the background.

After viewing the adjacent Franciscan church we walked uphill to the Lions Gate which enters the Arab Quarter and begins the Via Dolorosa.

Lions gate, one of seven open gates into the walled city.

About 50 meters inside the wall we entered the tranquil courtyard of the church of St. Anne with its adjacent excavations of the pools of Bethesda where Christ healed a sick man.  This church marks the traditional site of the home of Jesus’ maternal grandparents, Anne and Joachim, and the birthplace of the Virgin Mary.

Excavations of the pools of Bethesda.

We almost did not make it into the church as it closed a few minutes early for a group of touring clergy to sing in the church.  Fortunately Zvi was able to persuade the priest to let us in to hear the a cappella singing.  This church is renowned for its remarkable acoustics and reverberating echoes, the singing of this group of men was absolutely mesmerizing.

We followed the Via Dolorosa deeper into the Arab Quarter viewing a few more stations of the cross.  Our lunch venue had no available tables initially so we went to the Austrian Hospice of the Holy Family which opened in 1863 as the first national pilgrim’s guest house.

We first experienced the view from the rooftop terrace and then shared some apple strudel in the garden of their Viennese coffee house. 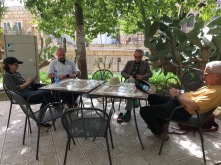 After having desert first we then went back to our lunch venue for a memorable mouthwatering simple middle eastern lunch of hummus and salatim at Abu Shukri Restaurant in the Arab Quarter.

After lunch we went to the western wall aka the wailing wall, splitting up to see the female and male sides of the prayer wall. 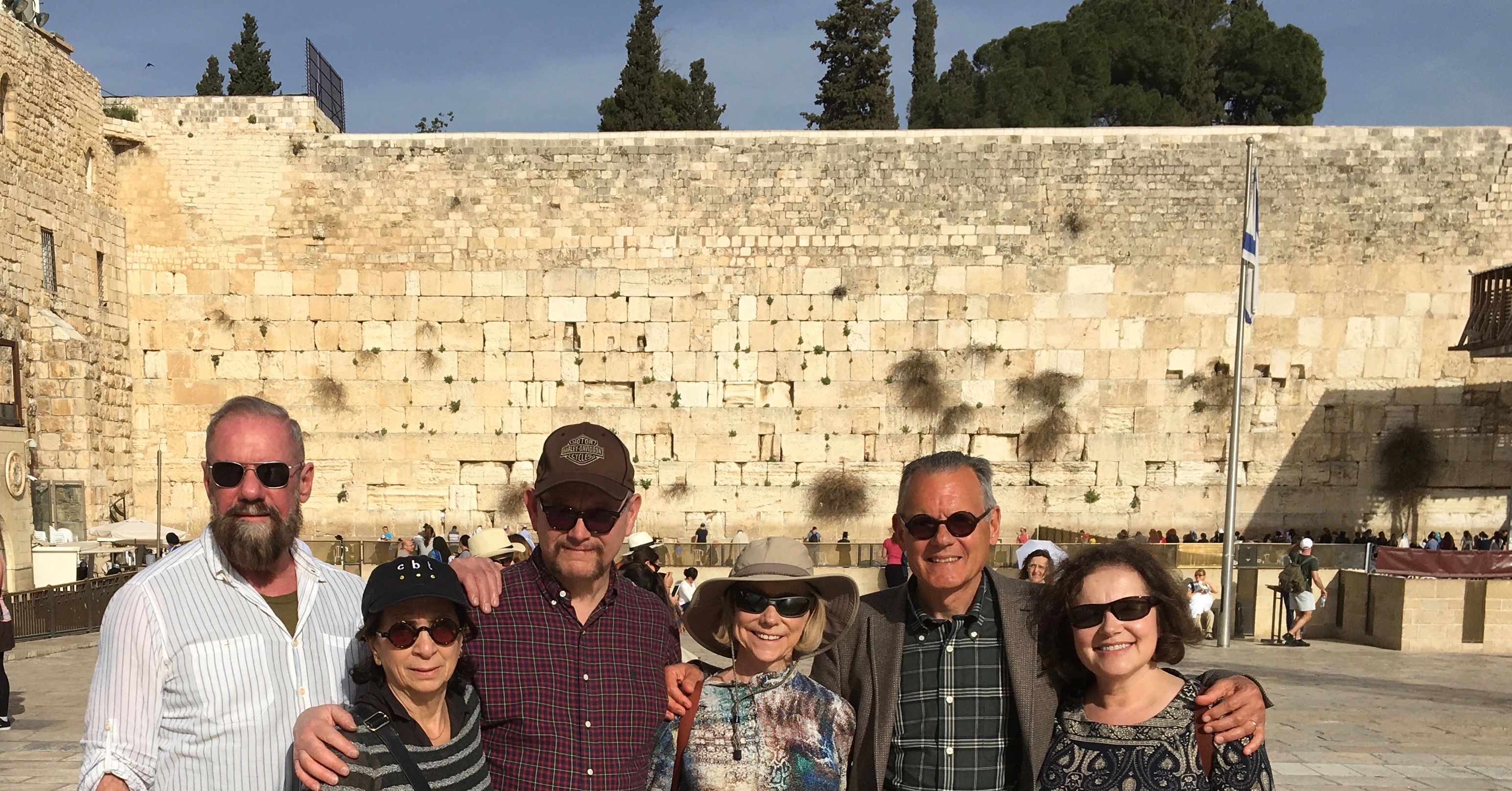 Papers of prayers and requests in crevices of western wall.

Bride praying on women’s side of western wall.

Two yarmulkes and a baseball cap.

We then followed the western wall to the southern wall excavations.  The enormous flight of steps approaching the southern wall is where all of the pilgrims entered Jerusalem through double and triple gates and the views toward the south are spectacular.  Stepping on these ancient stairs evokes a shiver of excitement knowing that your are walking in the footsteps of those who went the very same way to reach the temple. 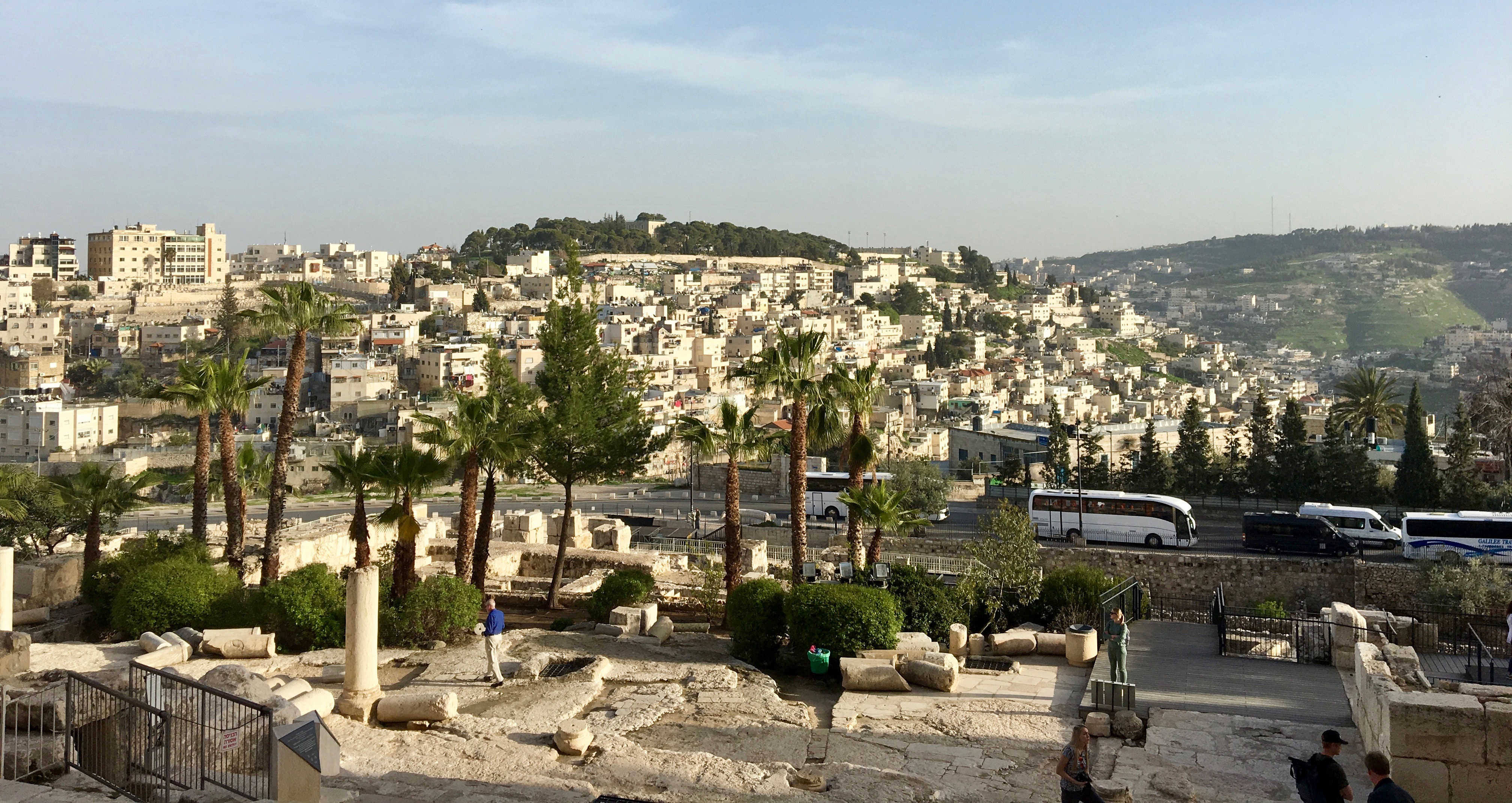 View south from the stairs, just imagine thousands of pilgrims flooding through that valley.

At this point we are all starting to glaze over as we have seen so much in such a short period of time and have been touring for over 8 hours.  There is so much to see and so much history to take in that we all sort of shut down.  In spite of our fatigue Zvi inspired us to follow in his footsteps and we headed back inside the walled city through Zion gate into the Jewish Quarter walking by the excavations of the old Cardo(heart) or market and then back into the Arab Quarter through their shuk and then into the Christian Quarter to the Church of the Holy Sepulcher.

Who would not want to eat at the Holy Cafe.

This church is one of Christianity’s holiest places and believed to be the site of the crucifixion and burial of Christ. 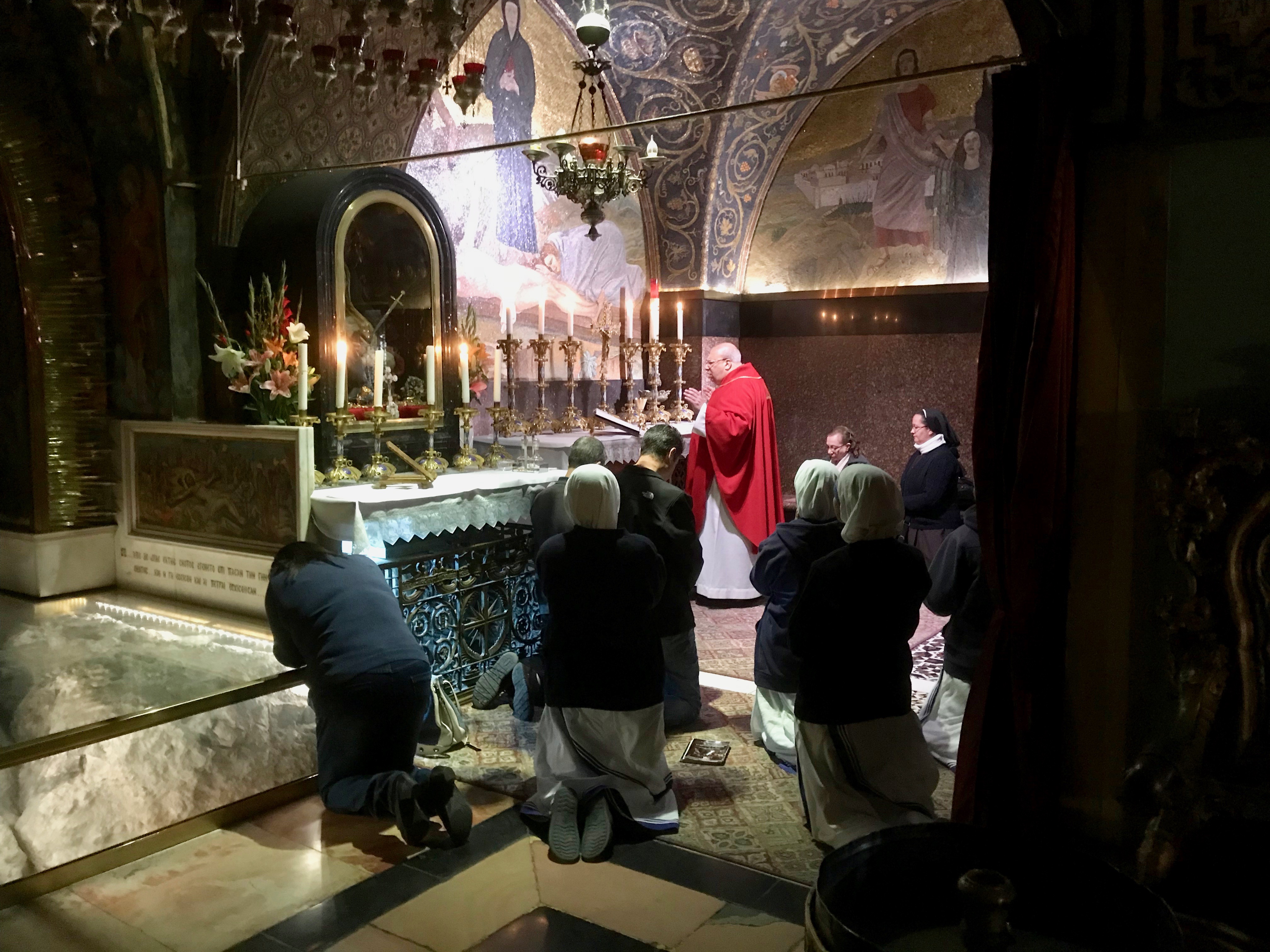 Catholic service in the Church of the Holy Sepulcher.

The church was quite crowded with worshipers and tourists so Zvi suggested that we return at 6:30 in the morning on our own to get a better look at the holy sites.  Given our mental status and worn out bodies we were happy to make the relatively short walk back to the Mamilla Hotel for showers, cocktails and a great dinner on the open deck of the hotel’s Happy Fish Restaurant.

Friends in the lobby of the Mamilla Hotel. 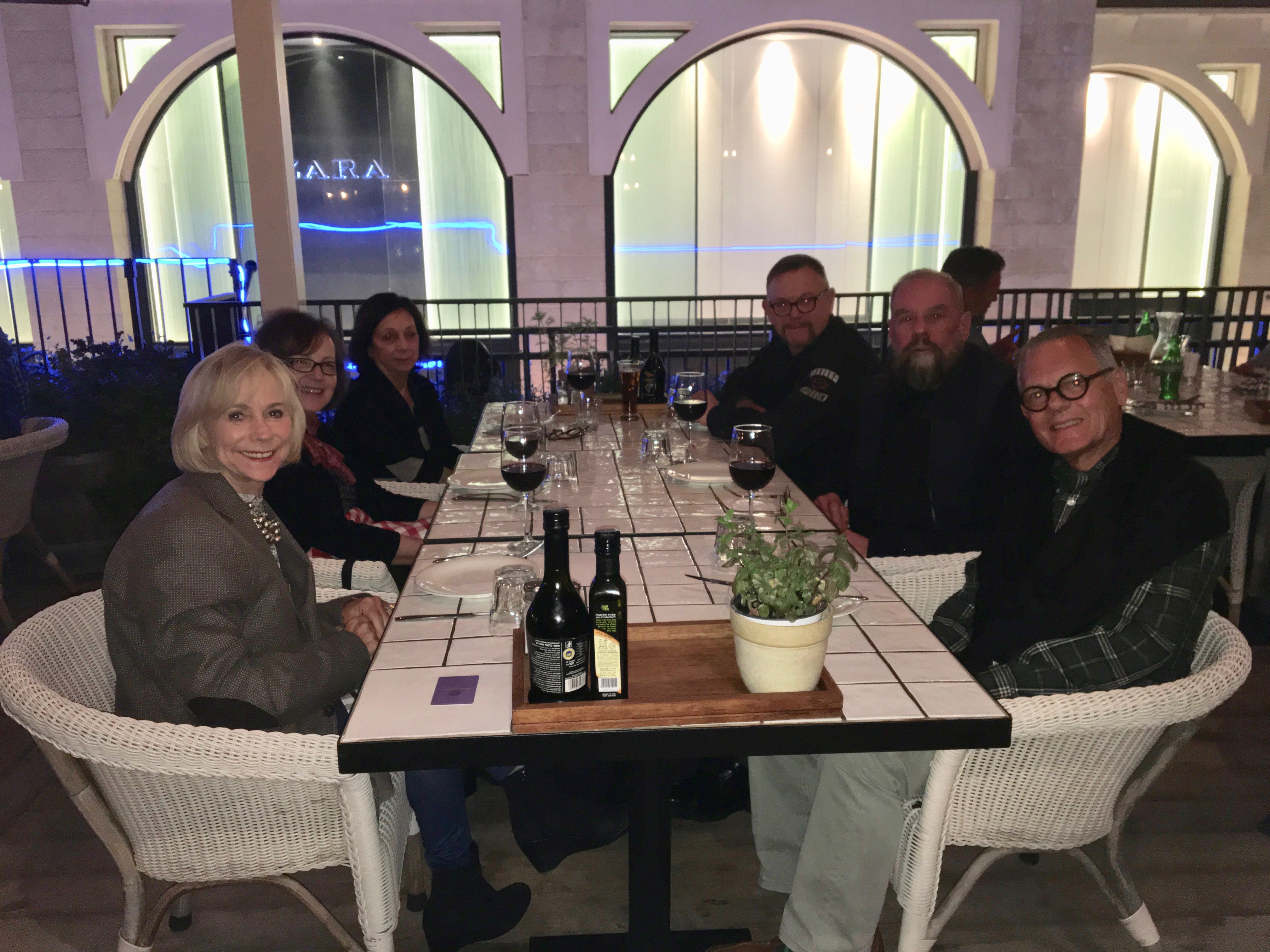 This is the end of day 1 of 4 with our superb Israeli tour guide Zvi Levran.

2 responses to “Touring with Zvi, Jerusalem”