Our last trip to Jerusalem

Wednesday April 11 is our last day for exploring as we will be packing up three months of assorted detritus on Thursday and flying out early on Friday.  Our decision was to take one last trip to Jerusalem.  We leave the house at 0720, take two buses and are in Jerusalem by 0900.  We take the tram to the Damascus gate and walk through the predominantly Arab East Jerusalem neighborhood stopping for a cup of coffee and delightfully cinnamony coffee rolls.

The Arab markets are so alive and appetizing.

The sidewalks are covered with street vendors and their wares.

We arrived at the Rockefeller Archaelogical Museum just after its opening time.  This beautiful white limestone building overlooking the Mount of Olives houses an immense collection of antiquities dating from prehistoric times until the Ottoman period which have all been arranged in chronological order.

View from the museum.

They have been collected from all over Palestine starting just before 1920 and continuing until 2016.  The layout of the museum makes it easy to cruise through and view selectively knowing that you are not missing anything.  It surrounds a beautiful serene inner courtyard which is great for taking a break.

We finished in just over an hour which is our usual museum limit.  It felt so peaceful as we only encountered about six other visitors during that hour.  From here we walked to the American Colony Hotel for lunch.

We stepped into St. George’s Cathedral, seat of the Anglican Bishop in Jerusalem.

This is a luxury boutique hotel housed in a former Ottoman palace which then became a Christian utopian society commune composed primarily of Americans and a few Swedes, thus the name American Colony.  The hotel grounds were beautiful with flowers in full bloom and large areas of the gardens composed of herbs used in their kitchen.

Lots of herbs spread throughout the garden.

Our lunch was overpriced, underwhelming and painfully slow.  Our after lunch exercise was an hourlong walk up and down the hills of Jerusalem to the Israeli museum which sits on a hill just across the street from The Knesset which is Israel’s single house governing body.  We arrived at the museum an hour and a half before closing time.  Our first stop was The Shrine of the Book which houses the Dead Sea Scrolls or at least scraps of them.  The only completely intact scroll is not on public display although a copy is.

Inside the domed Shrine of the Book and copy of intact scroll.  No photography allowed.

The building is quite significant as it is considered an international landmark of modern architecture.  The unique white dome symbolizes the lids of the jars that the first scrolls were found in.

Jar that the scrolls were found in with its domed lid.

We next visited the outdoor Model of Jerusalem in The Second Temple Period which is just adjacent to The Shrine of the Book.  The model measures about 1,000 square meters and gives a nice perspective of Jerusalem at the height of its glory in 66 CE  just prior to the Romans destroying the city and burning down the temple in 70 CE.

Model of the second temple and Jerusalem.

In our remaining time we elected not to take on the daunting task of deciding what to see in their overwhelming permanent collections but instead stayed outside wandering the immense sculpture garden with beautiful views of surrounding Jerusalem.  Two very impressive museums in one day, not bad for an uncultured couple who would rather play and party instead of viewing art or poring over dusty relics from the past. 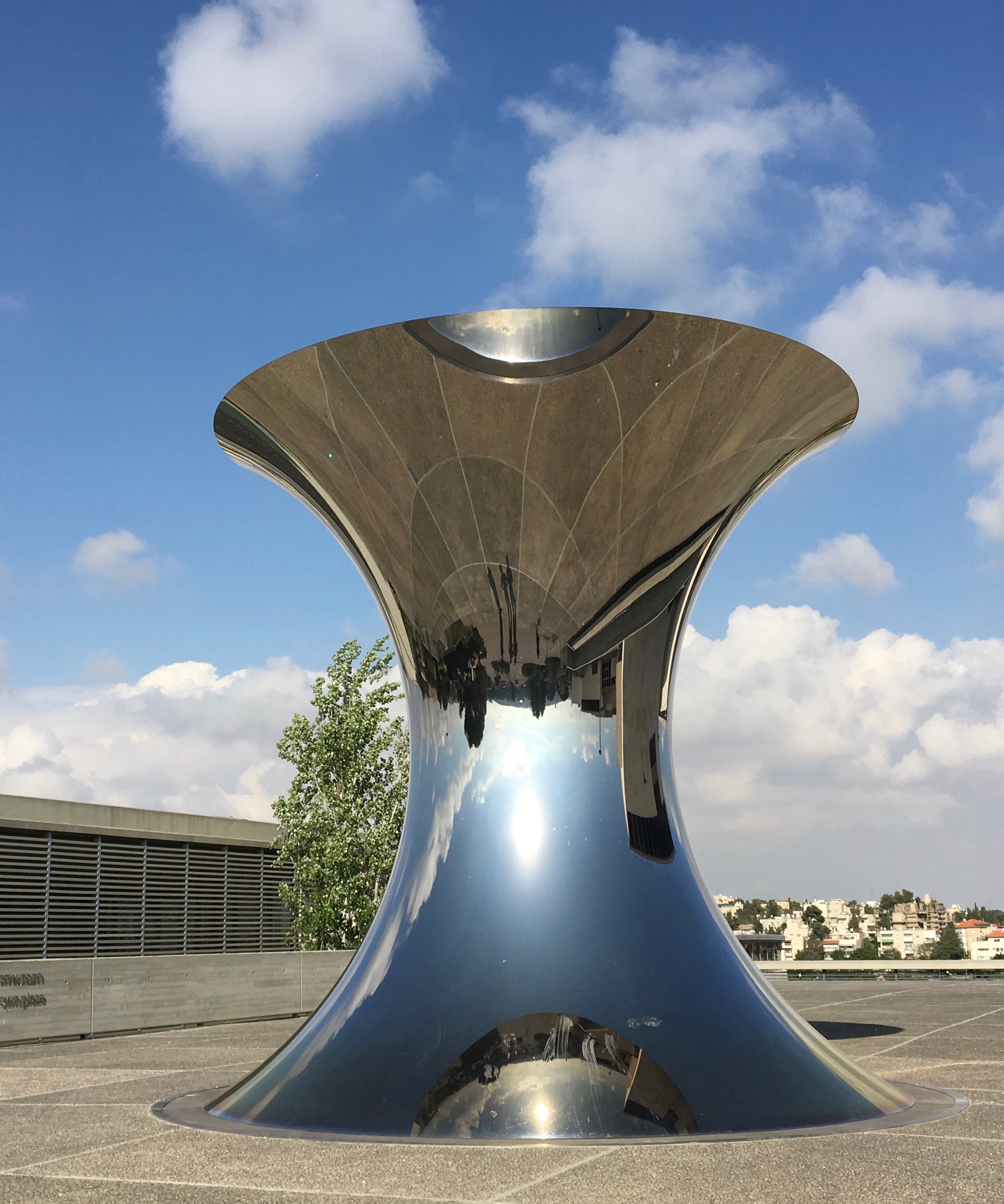 This one is titled “turning the world upside down”

and this one is an upside down tree.

We had an uneventful bus ride home and spent all day today packing for the trip home.  Today is Holocaust Remembrance Day and at 10am a siren goes off all over the country.  Everyone immediately stops what they are doing and remains still and silent for two minutes.

And so our time in Israel has come to a close.  Next stop is London via 12 days in Boston.

Blimey, is that Sandy & Jim.