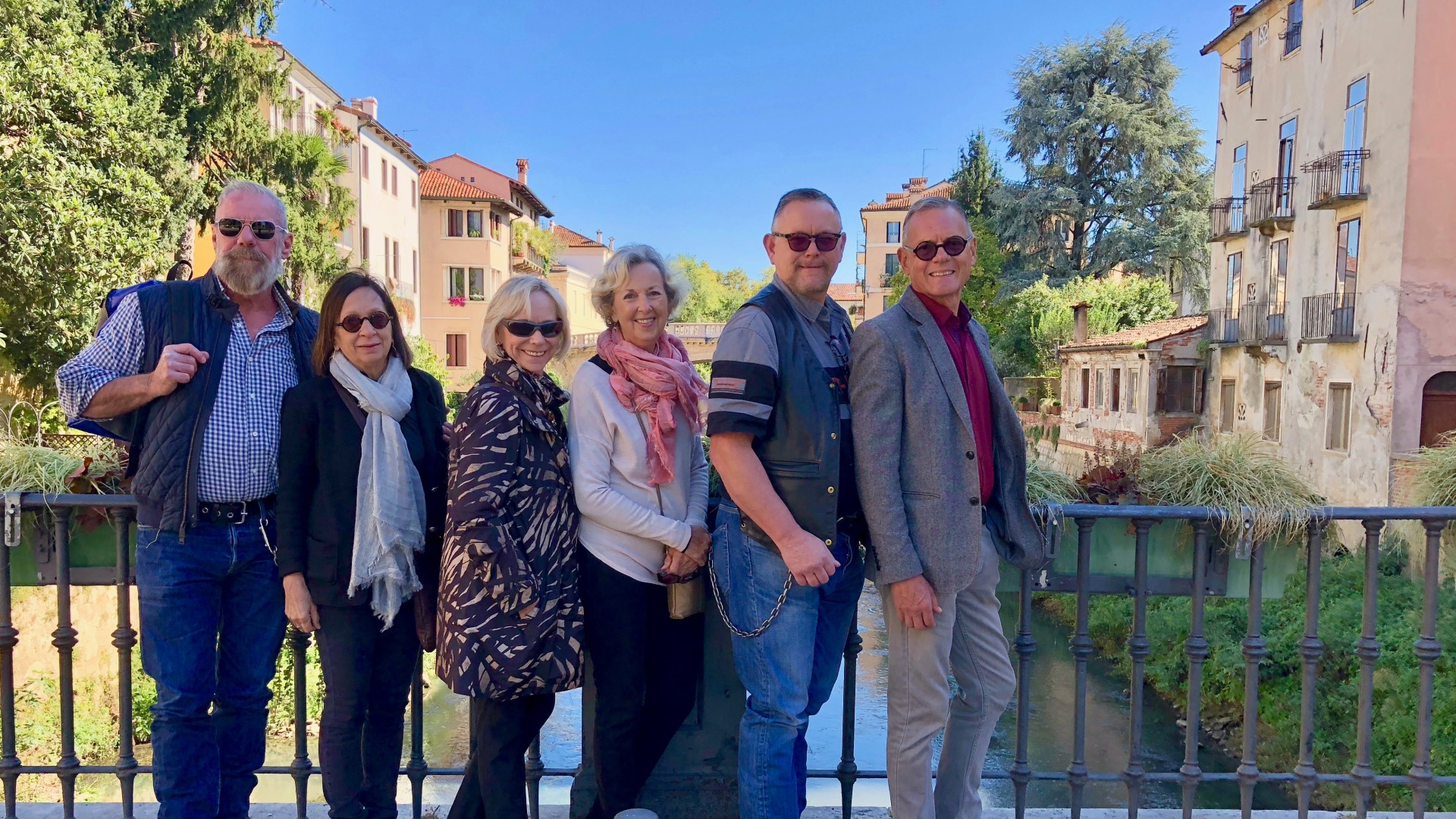 We left Boston on September 21 heading for Venezia Italia to meet up with five of our traveling mates.  Henry & Andrew, our stalkers from Berlin, were of course there.  Our neighbors from Boston; Margaret Deutsch, Peggy Scott and Tina Scarlata also joined us.  This trip was planned by Tina as a 60th birthday trip for herself with friends.  She has been working and reworking the details for the past year and did an outstanding job.  We arrived in Venice via CDG in Paris.  Not having a reservation for a water taxi we had to wait over an hour amid confusion, milling throngs of other tourists and taxi dispatchers with cell phones and clipboards telling us it would be just 10 more minutes.  Sandy finally got us a taxi for the 30 minute trip to our Airbnb by confronting one of the dispatchers about our prolonged wait.

What to say about Venice?  It is like no other place that we have been, we found it to be quite beautiful and charming in spite of all of the tourists who account for about 70% of the population as most local people cannot afford to live in the city.  Our Airbnb was away from the tourist attractions immediately on Giudecca Canal which is the widest and deepest allowing massive cruise boats access to Venice.  We never tired of seeing these floating cities going by with tug boats controlling them from front and rear.

The city of Venice is built on an archipelago of over 100 islands in a lagoon in the Adriatic Sea.  There are no roads and thus no cars in Venice, only canals and sidewalks along the canals and meandering alleys leading from one Piazza to the next.

Navigating the narrow alleys is quite a challenge even with google maps as the GPS loses signal and can lag well behind your actual position.  The only ways to get around are by walking which involves numerous stairs on the bridges over the canals, water taxis which are quite expensive and water buses which are still expensive and quite slow.  As usual we elected to walk almost exclusively.  Tina had booked a three hour tour of the Jewish ghetto with a private guide which turned out to be a great walking tour of the old city as we covered three of the six sestieri (refers to six subdivisions) of Venice.

Our tour guide, Christina, was so animated and personable that we had her take us on a tour of the Doge’s palace and the grand canal on the following day.  The Doge was an official, elected for life to be the Chief Magistrate of Venice.  Since they were elected for life they were sometimes killed just to get rid of them and they tended to elect very old men to keep their term in office shorter.  When the Doge died, his family had to vacate the palace within three days.

After the tour of the Grand Canal the water taxi dropped us off at the island of Murano which is known for its long tradition of glass making.  We learned that in 1291 all the glass makers were forced to move to Murano due to the risk of fires.

From Murano we took a water bus to Burano which we liked much better.  It was much more lively and cute.  It is known for its lace work and brightly colored homes.

Henry had also arranged a tour for us while in Venice.  He wanted to take a train 60 km. to Vicenza to see the Palladian architecture, specifically La Rotonda which was designed by the renowned architect Andrea Palladio as a retirement home for a priest Paolo Almerico who wanted a country home in his hometown of Vicenza. 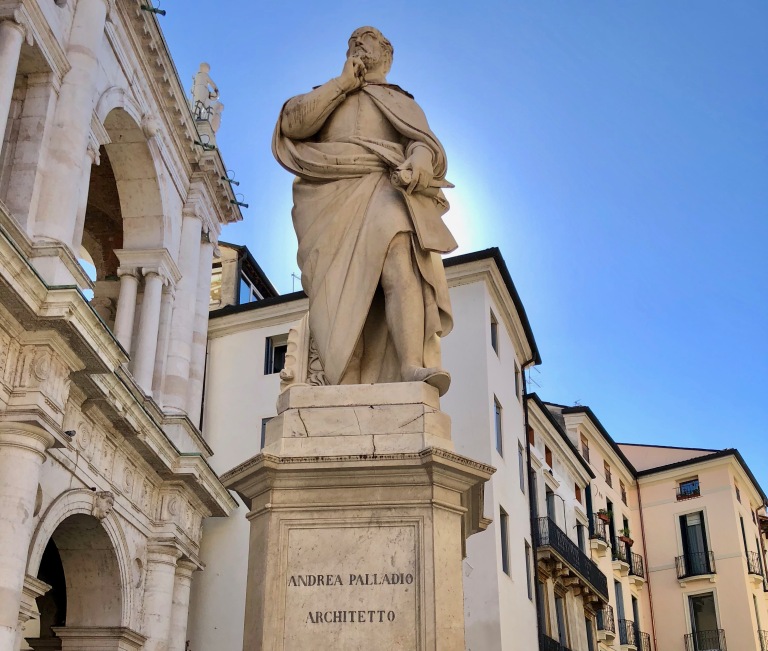 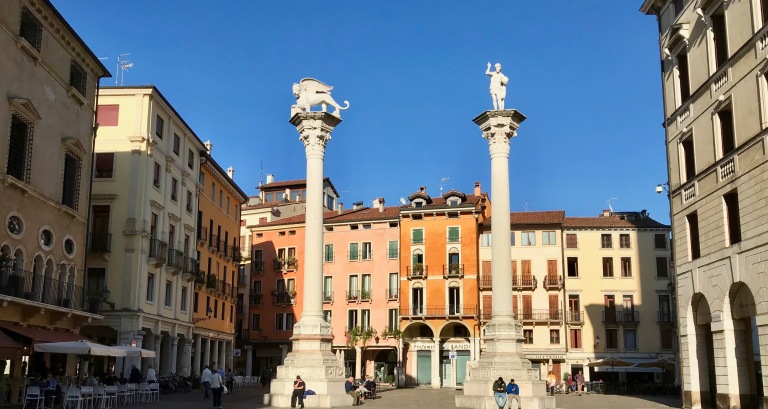 Henry had found a tour conducted by the present owner of La Rotonda Count Valmarana.  We all agreed to the somewhat exorbitant price and took the train to the charming little town of Vicenza where we had breakfast in an outdoor cafe and then walked through the town out to La Rotonda where the grumpy old gateman wouldn’t speak to us, let alone open the gate for us.

We finally got the attention of an Italian woman inside who eventually let us in after hearing that we had a private tour booked.  Come to find out we were the first group to ever take this tour.  The Count was very friendly with passable English and actually gave us a very rewarding tour.  He recounted the history of how and why it was built as a rotunda and how the sun and shadows move through the large windows during the day and seasons.  We were also able to see the kitchen and most of the ground floor which are not open to the public otherwise.  We all agreed that this was a once in a lifetime tour and money well spent.

The last day in Venice, the only group goal was to have an overpriced drink at Harry’s bar and a good final meal here.  We failed on both counts.  We did walk into Harry’s but they stood our group of seven in the middle of the room and told us to wait.  We were blocking patrons and staff alike and the room was so rundown and drab that we walked out and had our overpriced drink on the terrace of the Hotel Monaco next-door.

Their menu was overpriced and unappealing so we hit the streets looking for a good restaurant with room for seven at their prime dining time of 8:30, it wasn’t going to happen and we had to settle for a mediocre meal at a run of the mill tourist joint.

So, would we recommend Venice, absolutely.  It was much cleaner than expected and did not smell bad as we had heard.  It is extremely charming and has a lot to see and do.  San Marco Square with St. Marks Basilica and the Doge’s Palace are the number one tourist destinations and can be crowded and flooded at times.

We enjoyed the Peggy Guggenheim Collection which exhibits her art collection in the home where she lived in Venice.

As stated above eating with a large group is problematic and reservations are essential for any popular restaurants.  We did not make any reservations and as a result none of us were at all impressed by the food.  Everybody but curmudgeon Jim enjoyed the shopping.

Next destinations are Verano and Milan with friends and then on to Rome by ourselves again.

One last thing, we did not take a camel ride in Petra and we did not hire a gondola in Venice.

7 Replies to “Venice with friends”