On Tuesday October 9 we received a text from a friend that we worked with 30+ years ago that said “look who we bumped into”.

She was in Sorrento at a wine tasting with her “little sister” and volunteered to take a picture of another couple as they looked vaguely familiar.  We worked with Judy Ivas in the Emergency Department of New England Memorial hospital in the 80’s.  Judy was in her twenties at the time and adopted an 8 year old little sister through the Big Brothers Big Sisters of Boston program.  Her little sister Elena Castrini is now a successful 40 something married mother of four and Judy and Elena, now Frisco, have remained very close. Judy has worked as a flight attendant for American Airlines for 19 years and brought Elena to Italy on a completely unstructured trip.  She ran into Diana Gould who was initially a volunteer at the same hospital before morphing into a huge fundraiser for the philanthropy department, raising a few million dollars to renovate Jim’s Emergency Department in the mid 90’s.  She is engaged to Glen Dixon who was an Ob-Gyn at the same hospital and also a very close friend.  Glenn & Diana are getting married this November 17th which is our 28th wedding anniversary.  We were so excited to hear they were in Italy and contacted all of them asking to meet up when they return to Rome for their flights home.  We met Glen and Diana at their hotel which was only a short walk from our place.  We had a drink at the hotel and went out for an early dinner as they were flying back to Boston on Saturday morning. 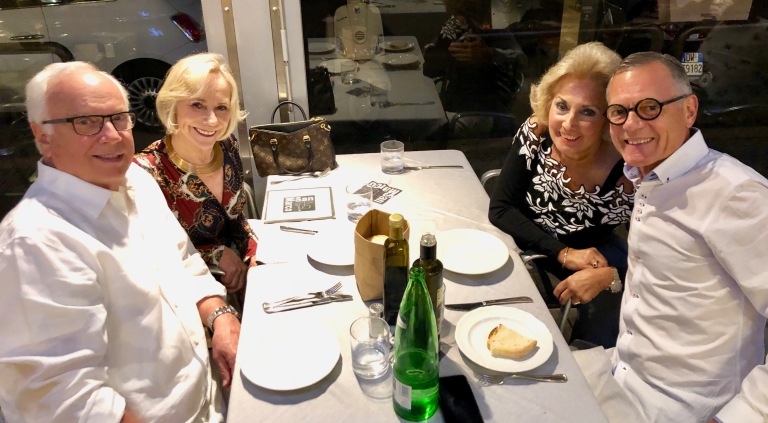 Judy and Elena came in on Saturday afternoon and stayed two nights with us.  We took them on our first Steen’s walking tour of Rome hitting The Spanish Steps, Trevi Fountain, The Pantheon and Piazza Venezia before returning to our apartment to enjoy Jim’s home prepared pasta with brie.  We had made plans to attend mass at St. Peter’s Basilica on Sunday morning and Judy and Elena opted to join us.  We left the house at 07:30 and walked the 30 minutes to Vatican City on the quiet early morning streets of Rome.

St. Peter’s square was not quiet as unbeknownst to us this was a very special mass involving the canonization of seven people including Pope Paul VI. 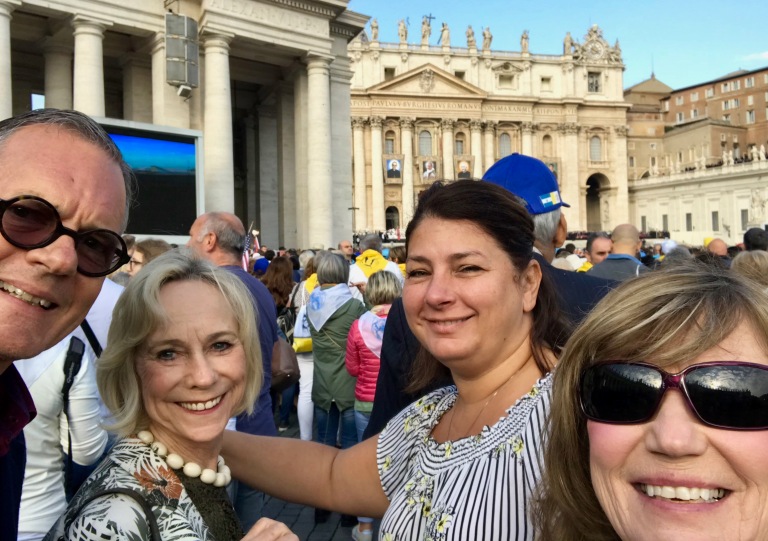 The mass started at 10 and we elected to leave at about 11, well before it was over and the other 70,000 people were also trying to leave.  We walked to Trastevere and had breakfast in a lovely little rear courtyard and then wandered the bohemian streets of this area.

On the walk home we hit Campo de’ Fiori and Piazza Navona.

We stopped for a brief rest on the closed rooftop bar/terrace of the Otivm Hotel overlooking the Piazza Venezia and Campidoglio before tackling the steps to the top of Capitoline Hill which is one of the seven hills of Rome.

We enjoyed the architecture of the surrounding museums and the views over the forum before walking home for some pre-dinner cocktails.

Judy treated us to a really elegant and delicious meal at Il Fellini which Sandy has had her eye on for the past week.

The one text to Jim’s phone about a chance meeting in Sorrento turned into a beautiful weekend with friends that we rarely get to see.  As a postscript to this, Judy’s employer at the hospital prior to her flight attendant days was a surgeon Joseph Twichell.  Judy knew that he was also in Italy with Sandy Rowe who was a nurse at the same hospital but we were unable to contact them as they were completely off-line for their whole trip.  When they returned home they contacted us.  They stayed for one week at a hotel 450 meters from our front door.  We were quite disappointed at having missed them.

One Reply to “Surprise friends in Rome”