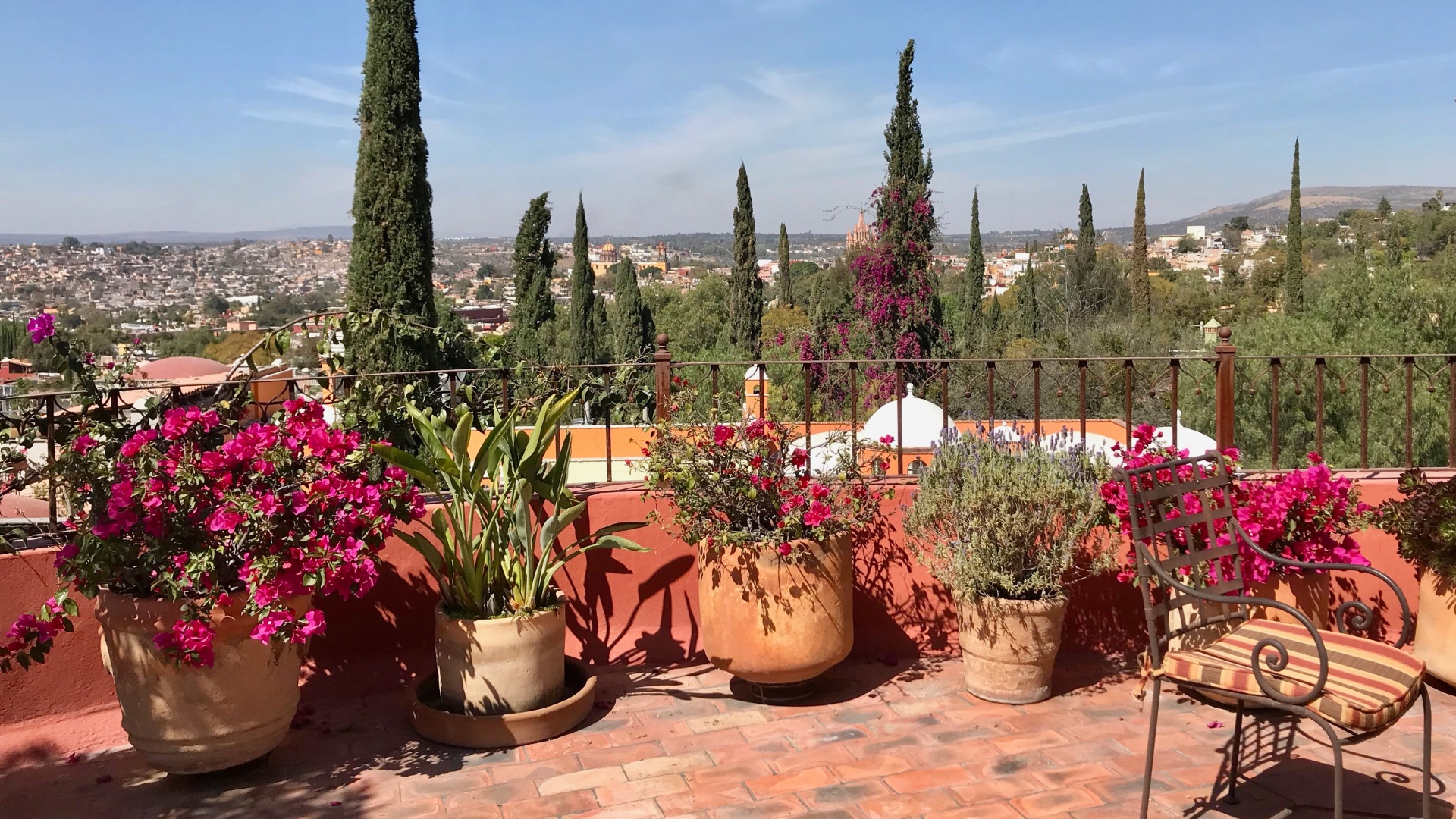 On Thursday January 31 our new friends Miguel & Ivonne picked us up just after noon and we headed 170 miles, 3.5 hours, northwest to their second home in San Miguel de Allende which is a UNESCO world heritage site that attracts thousands of tourists and new residents from abroad every year.  This town of 75,000 claims 10,000 expats from the US and another 2,000 from Europe as permanent residents, mostly artists and retirees.  It is known for its well preserved Colonial and Spanish architecture and also as an artists community.  The town is also significant as the site where the war for Mexican independence from Spain began in 1810.   On the drive to SMA we passed many of the migrant caravans heading from Central America through Mexico to the US border.

We arrived here late afternoon and took a walk towards the town center going through Parque Benito Juarez which was in the process of setting up for an 11 day Candelaria Fair with people selling arts, crafts, live plants and food.

We explored a few of the fancy hotels in this area and then had a light dinner at Cafe Rama before taking a cab up the hill to home.

We had high hopes for better running here due to lower altitude, about 1,000 feet less than Mexico City, and especially much better air quality.  Unfortunately the narrow very roughly cobblestoned streets and steep hills dashed any hopes of running.  The cobblestones are difficult enough to walk on so we did not even consider trying to run on them.

We were up early Friday morning though and did take a nice walk back down to the park and then went up 278 steps to an upper part of town with beautiful views out over the city.

We then walked down hill into the central city where we found coffee and the best churros and pastries in the city at Café San Agustín and Panio.

On returning home with our pastries we experienced a true Mexican breakfast of Huevos Rancheros prepared from scratch by Miguel and Ivonne’s maid Brenda.  After breakfast we drove to Fábrica la Aurora Centro de Arte y Diseño.  This one time textile factory and preeminent city employer has been transformed into a cultural arts and design center housing Modern Art galleries, designer furniture and interior design stores, along with antiques, jewelry, embroidery and restaurants.  We spent a couple of hours here, ending with snacks and coffee.  We had drinks on our roof deck enjoying the beautiful sunset before teaching our hosts how to play Buracco which we learned in Italy although it had its origins in Argentina. 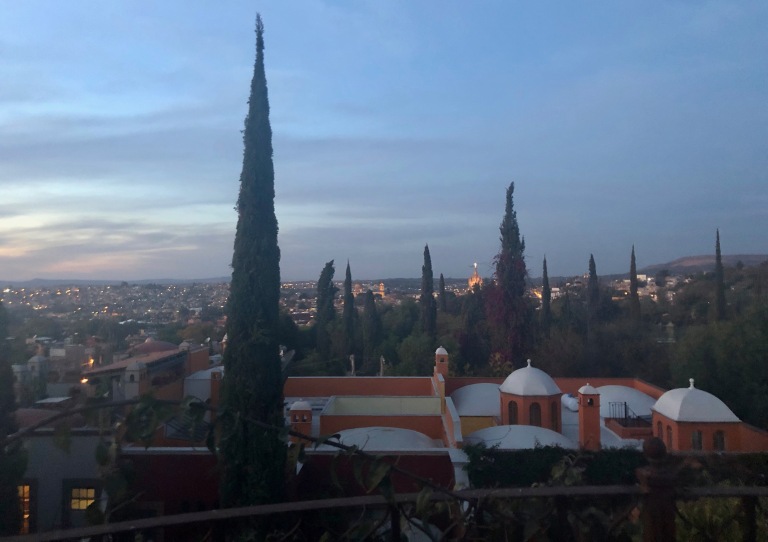 Saturday morning Jim was up early and saw hot air balloons going up fairly close overhead, he saw them every morning after that also, as many as four one morning.

Saturday was spent just exploring the city with our hosts Miguel and Ivonne.  We went into fancy boutique hotels, local artisan shops, ceramic shops, art galleries and the local small theatre which puts on live opera and also shows movies. 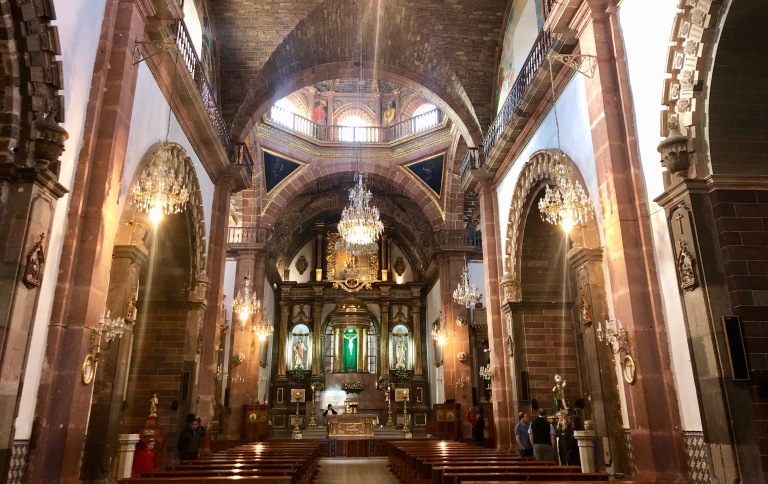 We stopped for coffee, snacks and drinks when we got tired and eventually made it home.  The morning of Super Bowl Sunday after our stair and town walk we went to El Charco del Ingenio Botanical Garden which is a local Nature Preserve and Botanical Garden.  It displays a vast botanical collection of cacti and other Mexican plants, many of which are rare, threatened or in danger of extinction. 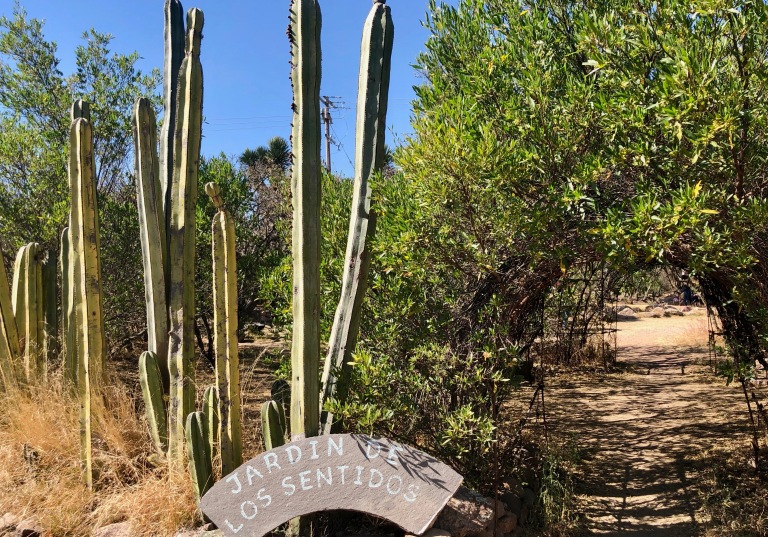 After the Botanical Garden we went to Sunday brunch at Hotel Santa Monica which is famous for having hosted many film celebrities over the years.  We then did our shopping in preparation for the Super Bowl.

We enjoyed our Super Bowl dinner with great friends and the outcome in spite of the very boring game, halftime show and advertisements.  Sandy promised her friends a Mexican Hat Dance if the Patriots won.

Monday we drove about an hour to Guanajuato which is the Capital city of the state of Guanajuato. This former silver mining town is famous for its hilly, cobbled alleys lined with colorful colonial architecture and picturesque garden plazas.  This town is situated in a valley and appears like a town in a bowl when viewed from above.  Many of its driving streets are located in a network of tunnels underneath the town with underground forks and numerous entrances and exits throughout the small town.  We enjoyed a few hours of wandering the town exploring its many shops and viewing its Teatro Juarez and Basilica of our Lady of Guanajuato.  We bought and sampled local pastries and sweets, really loved the Mexican coffee at a local café and had a great meal in an outdoor restaurant on Jardin de la Union.

Guanajuato is famous for one other thing, mummies.  El Museo de las Momias is a local museum where for a few Mexican Pesos you can see around 60 very gross mummies.  The reason for the mummification is somewhat conflicting but we can attest to the fact that they are dead, mostly standing with paper thin skin and very grotesque looks on their faces. 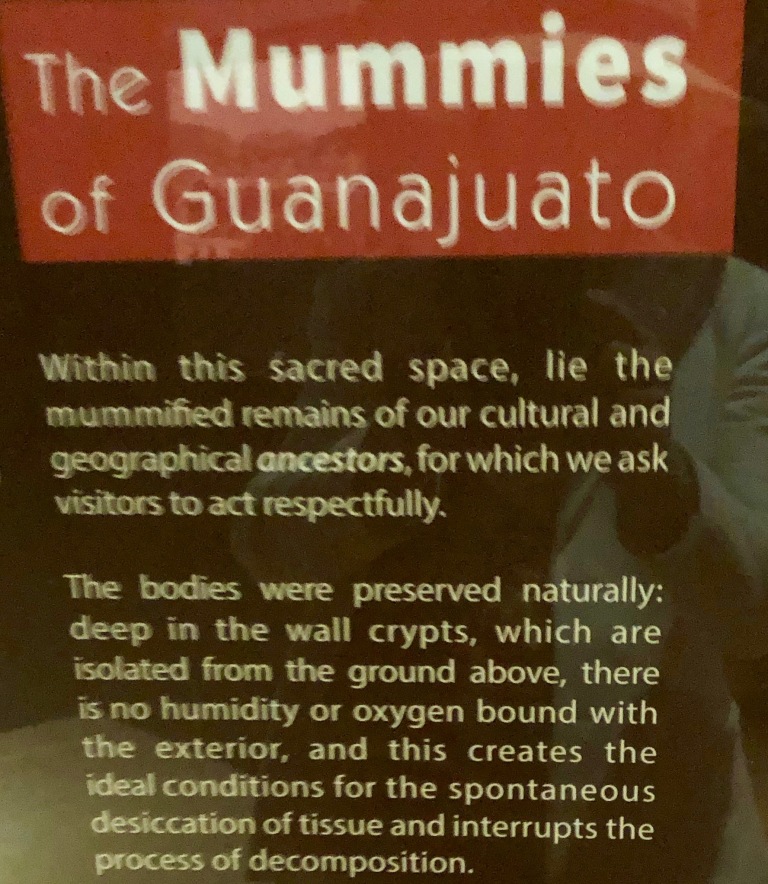 Well, that is enough of that.  We drove back to SMA and tried to forget that museum.  Tuesday morning is our third walk up the stairs and back down into the town for coffee, churros and this morning breakfast at Café San Augustín.

While eating breakfast we heard the people at the next table talking about Melrose.  Turns out that they were neighbors and schoolmates from the Melrose Massachusetts school system where our grandson Jackson is presently a senior in high school.  One of them has lived in San Miguel de Allende for many years and the other is visiting from.?????.  Our next stop was the library as Sandy had seen in the local paper, Que Pasa, that a couple from Seattle Washington was giving a talk on their experience of selling their house and cars and living in Airbnb’s around the world for the past six years.  They have visited 80 countries and stayed in 210 different Airbnb’s.  They are living a retirement similar to ours, but they move every 7-10 days as compared to our three months.  They are also much more high profile as they solicit newspaper interviews and give talks almost everywhere they go.  You can view their blog at senior nomads.com.

This little city is full of activities for expats.  The other activity that we had seen in the local paper was what they call a “conversation with big thinkers” which was a talk by John Perkins who wrote a book Confessions of an Economic Hitman in 2004.  Jim had read most of the book in 2016 after his prostate surgery and was interested in hearing the talk which was titled Economic Colonialism and the Redemptive Powers of Indigenous Cultures.  The talk was somewhat overshadowed by sound and amplification problems (the old expat community here are very hard of hearing) but it was interesting never the less.  Mr. Perkins is somewhat into Shamanism as he feels that a Shaman saved his life back in the 70’s.  He voiced the opinion that the Shamans may be the people who save the world from climate change and all of its other problems.  The Q and A was also quite interesting listening to burned out hippies voicing their opinions as to why they had been unable to change the world for the better, not asking questions but using the podium as their own little bully pulpit.  Our opinion is that there are too many elderly baby boomer expats here.

We returned to Mexico City on Wednesday February 6 just a couple of hours before the arrival of our friend from Brewster Massachusetts, Walter LaLiberté.  We plan on returning to San Miguel de Allende in late March with our stalkers Andrew and Dick. 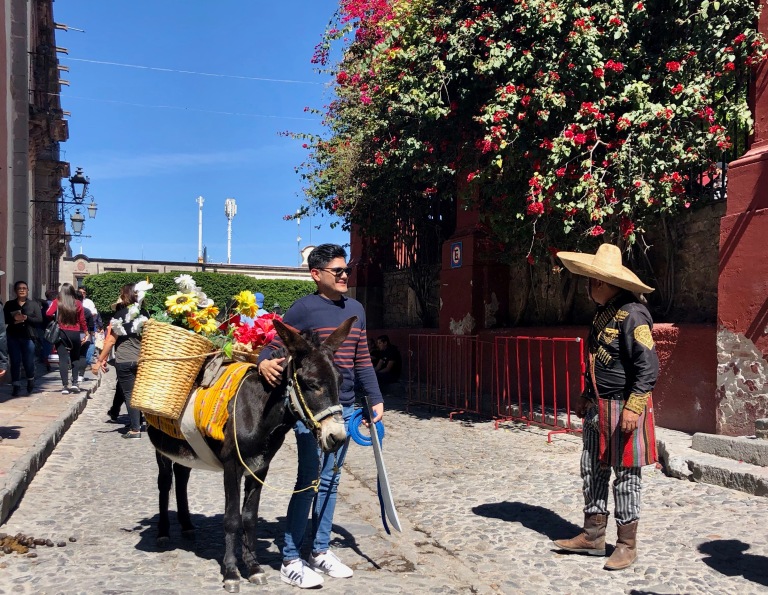