Our nephew Paul and wife Alicia were the first to take us up on the offer to be our guests in Mexico City and we were overjoyed at the prospect of spending quality time with this very fun and interesting couple.  Like us they have a true zest for life and love to travel.  Paul is the oldest son of Claude and Donna.  Claude is Jim’s oldest brother and like Jim, Paul also spent part of his life in Ethiopia while his parents did missionary work there.  Alicia is a school psychologist and has traveled the world extensively almost always alone during her summer school breaks.  Paul’s travel through his career as a technology engineer manager and sales director with various software companies has taken him all over the world for many years. They arrived here on Friday February 15, one day after closing on a new home in Denver Colorado.  They presently live in Austin Texas but made a very recent decision to move to Denver.  Needless to say they are our kind of people and the weekend we spent with them was wonderful.  They arrived Friday afternoon and our first stop with them was to our favorite taco place, El Tizoncito, across the street from our Airbnb.  We had no sooner sat down than they started serving us tacos al pastor which is pork off of a vertical spit with some pineapple also off of the spit.  After eating to our hearts content we explored our wonderful la Condesa neighborhood as we headed to Chapultepec park followed by a little stroll down Paseo de la Reforma.

We hopped in an Uber to cover the final two miles to Centro Historico and the Zocalo Plaza which is beautiful at night.

We had dinner on the rooftop of the Gran Hotel Ciudad de México.  This five star hotel features Art Nouveau  architecture and the rooftop offers magnificent views of the Zocalo and the National Palace, not to mention the best and biggest margaritas ever. 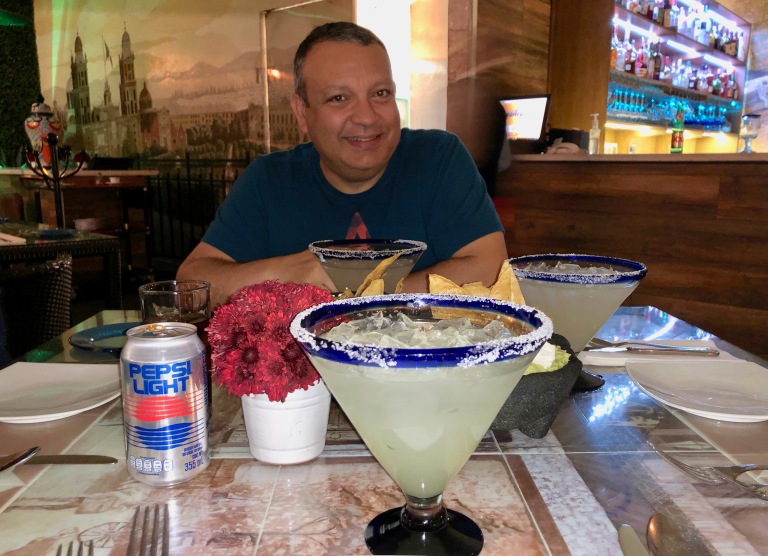 Saturday we enjoyed a light breakfast on our outdoor deck then took an Uber to the vibrant Coyoacán neighborhood where Alicia and Paul visited Casa Azul, family home of Frida Kahlo.  Jim and Sandy visited the Trotsky house. 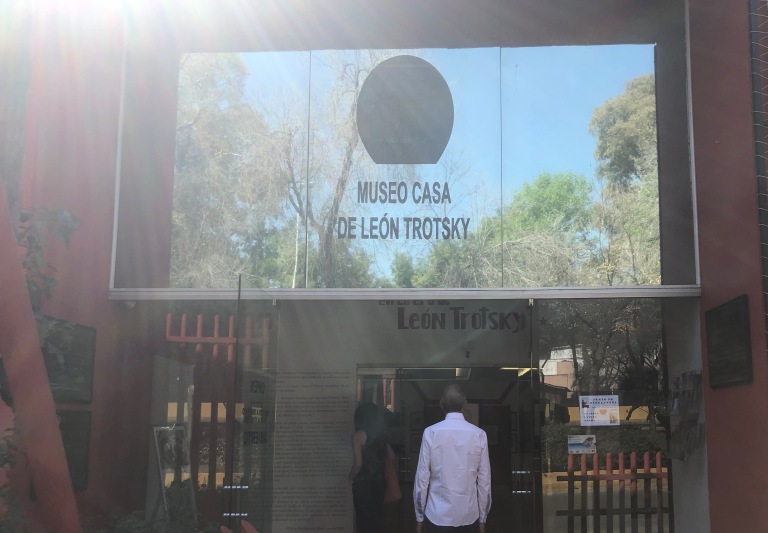 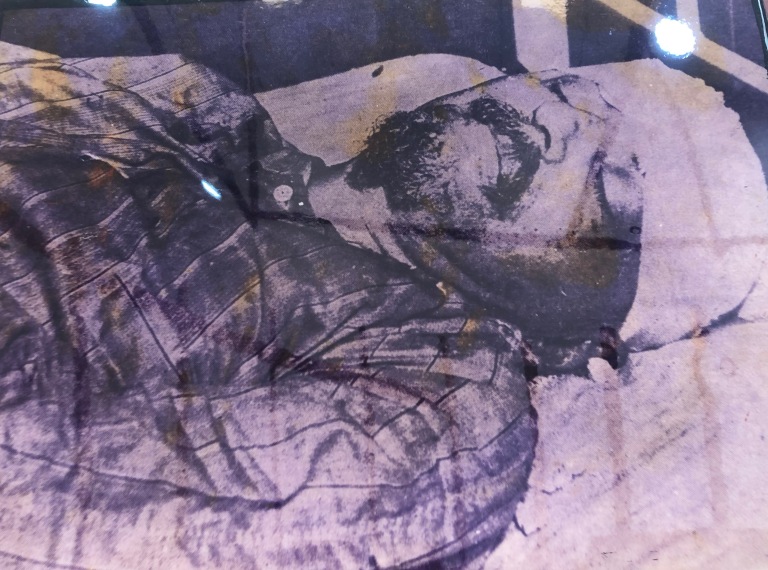 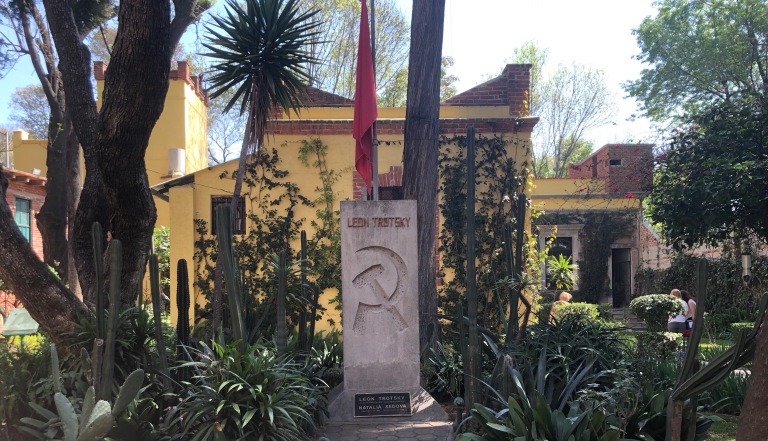 The Trotsky Museum honors Leon Trotsky and an organization that works to promote political asylum.  Leon and his second wife Natalia Sedova lived here from April 1 1939 to August 1940.  The study is the site where Trotsky was killed by an assasin with an ice axe to the back of the head.  Trotsky was forced into exile outside the Soviet Union in 1929 because of his criticism of Stalin’s government.  He and his wife wandered around several countries under a death threat and were pursued by Stalinist agents.  Diego Rivera and Frida Kahlo were successful in persuading the government to give them political asylum in Mexico.  Leon and Natalia Trotsky moved to this house after living two years with Frida and Diego.  Frida had an affair with Trotsky during this time as a revenge for Diego’s affair with her sister.  It is interesting to note that the Trotsky’s were kicked out of Casa Azul not for this infidelity but for a political disagreement between Trotsky and Diego.  After the museum visits we called for an Uber to take us to San Angel so Alicia and Paul could experience the wonderful market as well as lunch at the San Angel Inn and visit the Diego Rivera and Frida Kahlo home museum.

In the evening we met up with an Airbnb experience group for drinks, street food and Lucha Libre which is freestyle Mexican wrestling that was introduced to Mexico City in the early 20th century.

These colorful masked wrestlers known as Luchados dress up as superheroes and villains.  It is quite the sight to see them perform a series of holds as well as high flying maneuvers.  The wearing of masks has developed special significance and matches are sometimes contested in which the loser must permanently remove his mask and reveal his identity.  Tag team wrestling is especially prevalent in Lucha Libre, particularly matches with three member teams called trios.  The Luchadors usually come from extended wrestling families.  The first round that we saw were two women wrestlers.  The picture below is a video. 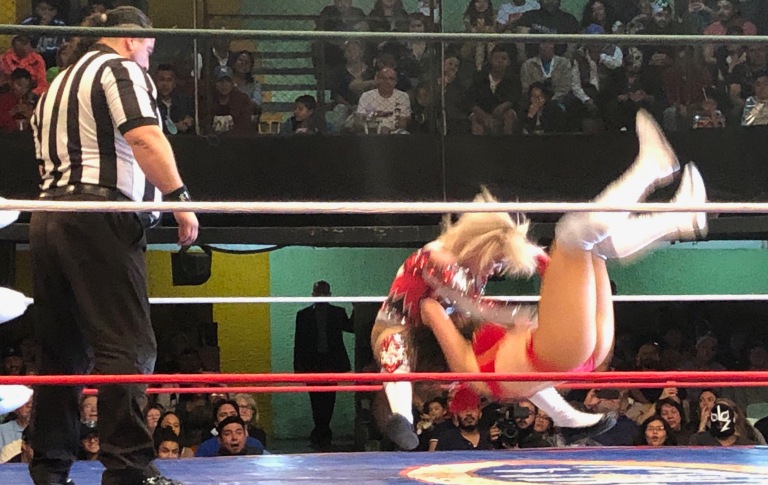 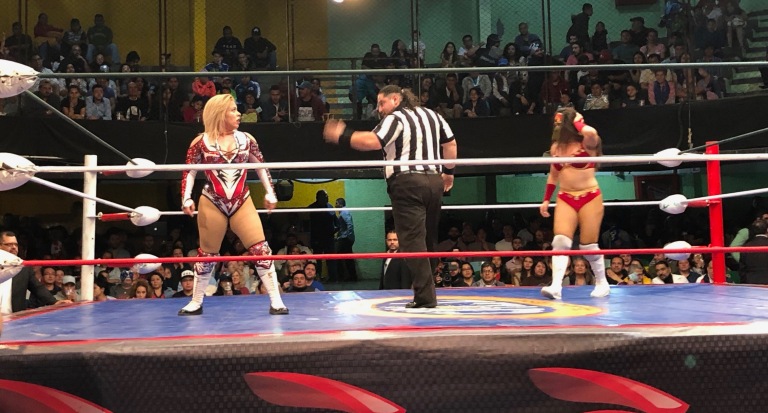 Other rounds included trios.  We were surprised to see families with young children present.

We were amazed at the energy and enthusiasm of the crowds who really get into the spectacle of this show.  We were impressed with the incredible agility and athleticism of the wrestlers in a well choreographed performance.  Another video below. 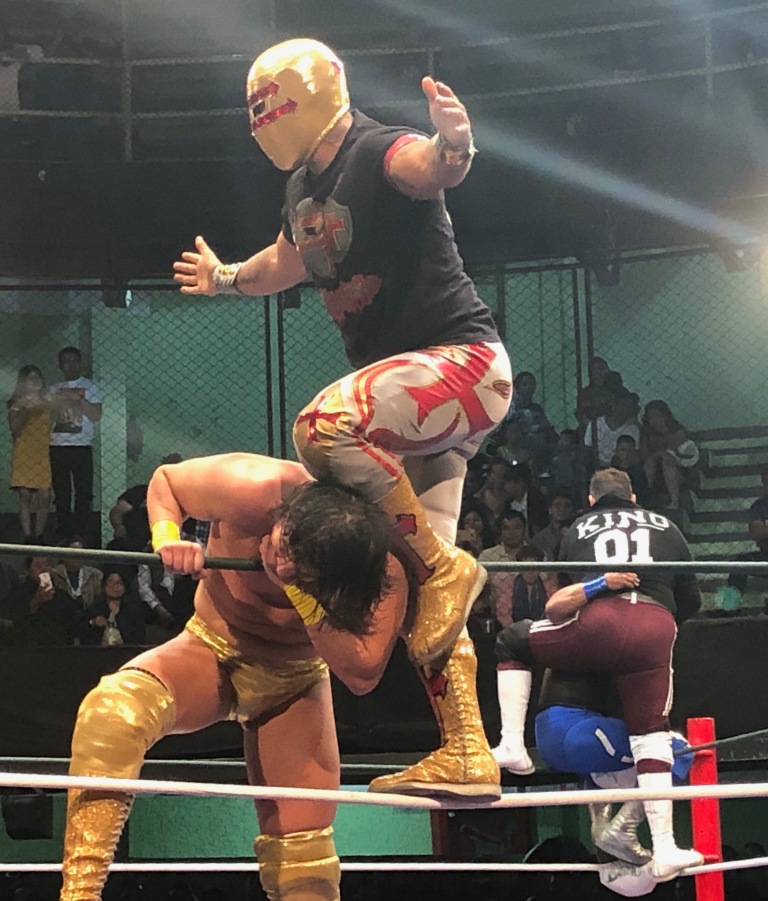 Sunday morning we took another Stylewalk MX tour, this time with Javier.  Our first stop was Tepeyaca Hill which would become Villa de Guadalupe.  According to tradition a Mexican peasant named Juan Diaz experienced on December 9 1531 his first vision of the Virgin Mary while on his way to mass.  She was surrounded by a heavenly light on Tepeyac Hill on the outskirts of what is now Mexico City.  She spoke to him in his native tongue asking him to tell the Bishop to build a shrine to her on the hill.  The Bishop did not believe Juan Diego and asked him for proof.  On December 12 while searching for a priest to administer last rights to his Uncle, Juan Diego was visited by Mary again.  He told her of the Bishop’s answer and she instructed him to gather roses and take them to the Bishop as a sign.  She also informed him that his uncle would recover from his illness.  Juan found many roses on the hill despite it being winter.  When he opened his cloak while appearing before the Bishop dozens of roses fell out and an image of Mary imprinted on the inside of the cloak became visible.  Having received proof the Bishop ordered that a church be built on Tepeyac Hill in honor of the Virgin.  Juan Diego returned home and found his uncle’s health restored.  The cloak or tilma has become Mexico’s most popular religious and cultural symbol. 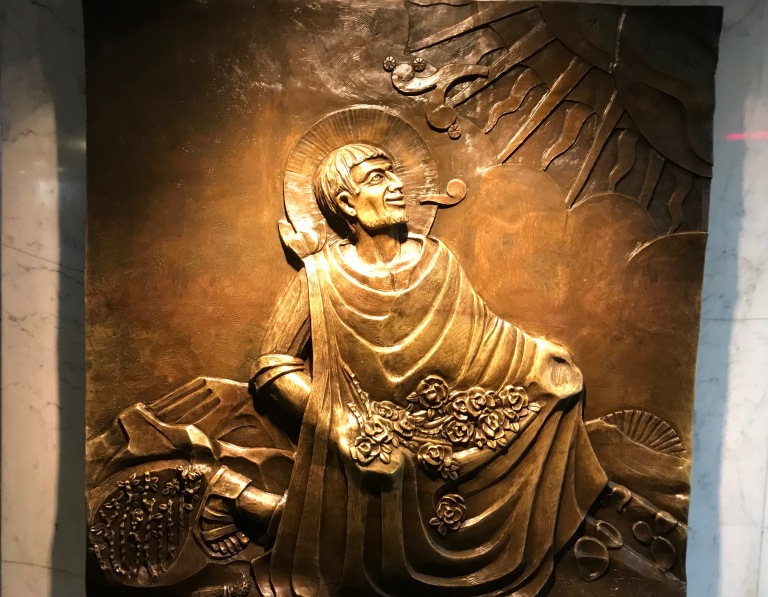 It now hangs in the newest of six churches that comprise the Guadalupe shrine site.  For the rest of his life Juan Diego lived in a hut next to the church and took care of the pilgrims who came to the shrine.  He was buried in the church.  His existence which had been questioned by Catholics and non catholics alike was confirmed by the Vatican and he was beatified on May 6 1990 and canonized on July 31 2002 by Pope John Paul II.  Numerous miracles have been attributed to him and he remains one of the most popular and important saints in Mexico.  The Guadalupe shrine is visited by 18-20 million people each year.  It is one of the most important pilgrimage sights of Catholics.

Our primary destination of our day was the Teotihuacan City of the Gods Pyramids.  Historically the most accurate description of these pyramids would be Temples.  The first and largest one we visited was Temple of the Sun.  This was built about 200 CE and it is the third largest pyramid in the world measuring 720 X760 feet at its base and dominates Teotihuacan from the east side of the Avenue of the Dead.  It is constructed of volcanic rock of the region.  On the pyramids west side are 248 narrow steps with very high risers  which makes going up and down quite perilous and difficult.  On Sunday the entrance to the pyramids is free and the line looked to be about one hour wait to begin the climb. 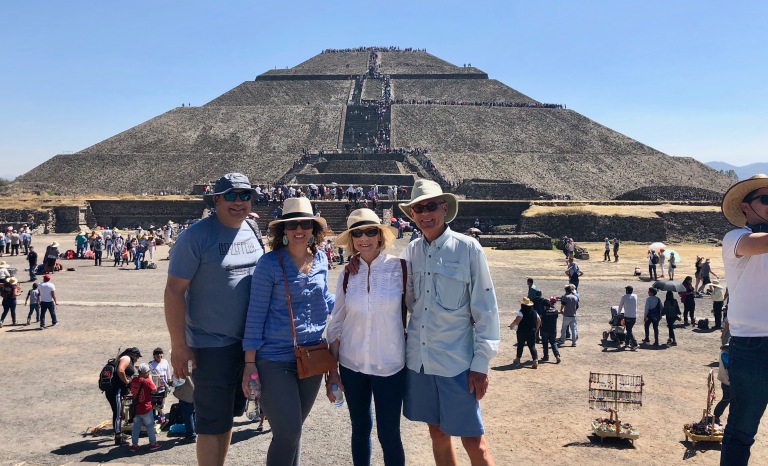 We abandoned this challenge and made our way to the next largest pyramid.  Sandy was fortunate to have been here six days earlier on a Monday with Walter and friends and was able to climb it then and had a funny sacrificial offering of Walter at the top.

So we proceeded down the Avenue of the Dead to the second largest pyramid, Temple of the moon.  There were no lines and we were able to climb to the top.  This Temple was constructed between 100 and 450 AD.  The platform atop was used to conduct ceremonies in honor of the Goddess of Teotihuacan, the goddess of water, fertility, the earth and even creation.

This is a shorter climb but the rewards at the top offer spectacular views of the pyramid of the sun.  Check out Sandy’s lotus pose on the top.

The Citadel was our last pyramid visit and it did not disappoint as it was less crowded with tourists.  Also known as The Feathered Serpent the Citadel had the capacity to receive more than 100,000 people inside.  This structure is notable partly due to the 1980’s discovery of more than 100 possibly sacrificial victims found buried beneath the structure.  Most victims appear to be young men with hands tied behind their backs and more interesting is that DNA testing showed that the victims were not indigenous to the population.  In other words those sacrificed were all foreigners.

Our next stop was to a spot that gave us an educational introduction to the many uses of Agave plants.  This was followed by a tasting of pulchi, tequila and Mezcal.  Pulchi is honeywater with less than 10% alcohol.  We also had an interesting introduction to the hairless vegetarian Mexican dog xoloitzcuintli.

We enjoyed a Mexican lunch here then returned home where we introduced Alicia and Paul to our favorite card game of Buraco. 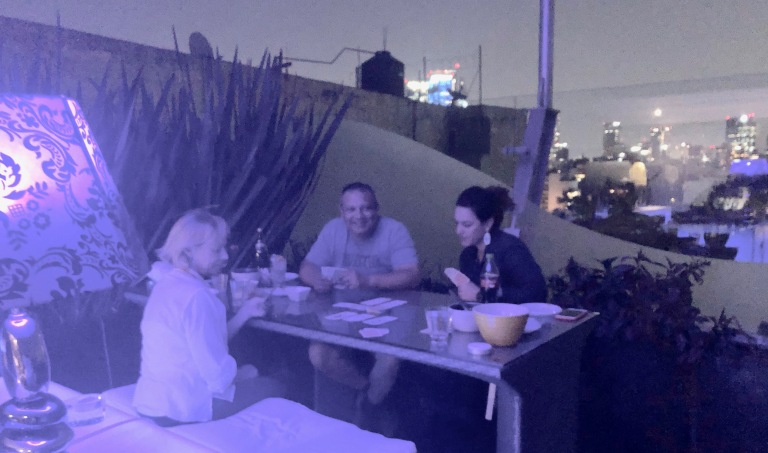 On Monday we had a farewell breakfast at Matisse and then relaxed on our outdoor terrace before Alicia and Paul headed back to Austin Texas to put their house on the market. Thank you Alicia and Paul for taking the time out of your busy life to spend your long weekend with us in Ciudad de México.