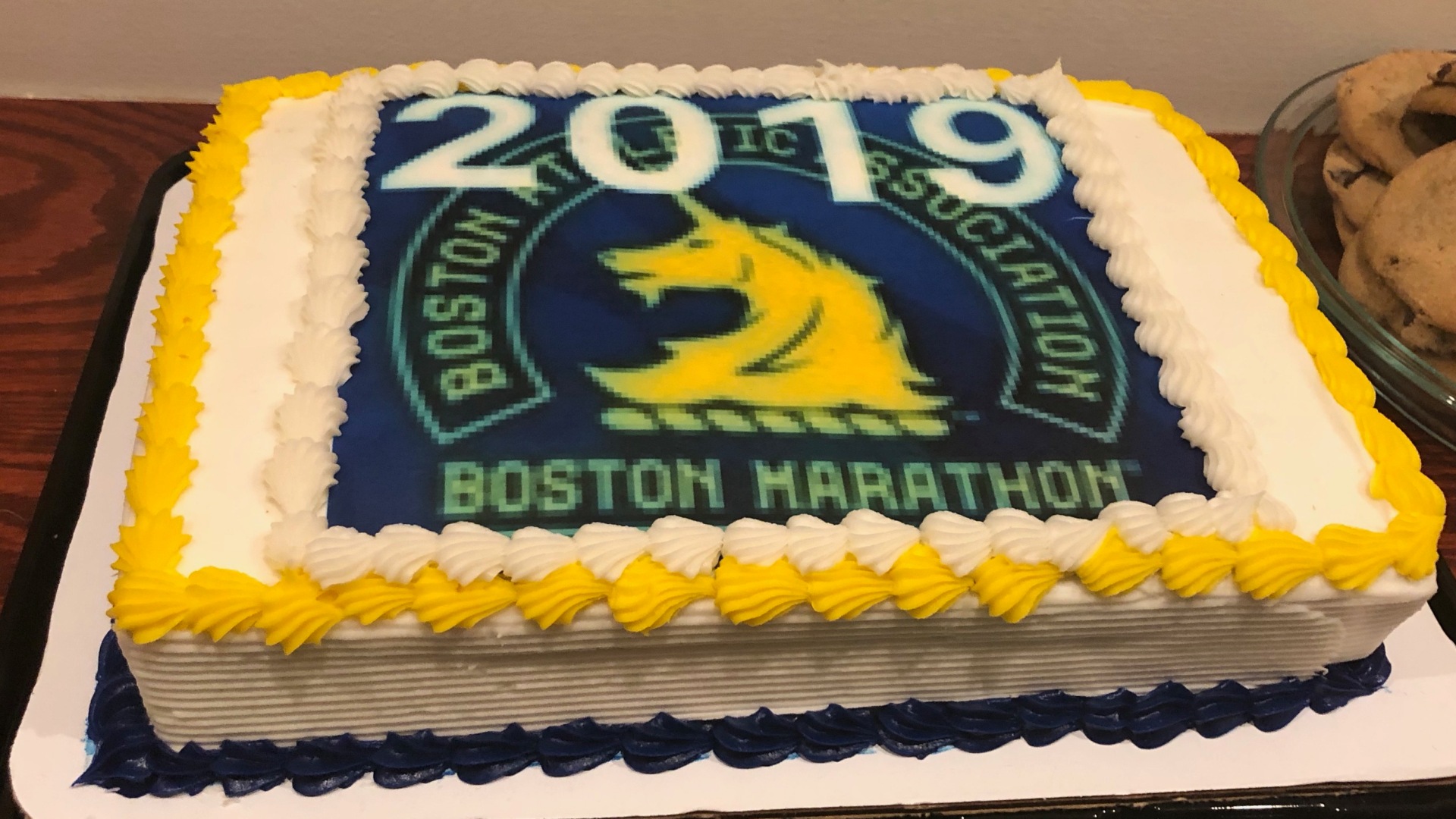 We left our home in México city at 6am on April 11 along with our house guests and said our good byes at the airport as we were traveling on different airlines.  We arrived home in Melrose 14 hours later where the only living soul to greet us was Gerry, Jackson’s class pet mouse that he was caring for over the school’s spring break.  We were in bed before anyone else arrived home.

The first weekend was taken up with what Sandy refers to as “Marathon Madness Weekend”, running the BAA 5K at 8am then immediately walking up to Boston City Hall where we spend several hours stuffing goody bags for the runners in the bowels of the building.  This is Sandy’s 12th year volunteering and Jim’s 2nd.  BAA refers to the Boston Athletic Association which runs the Boston marathon and a few other races. 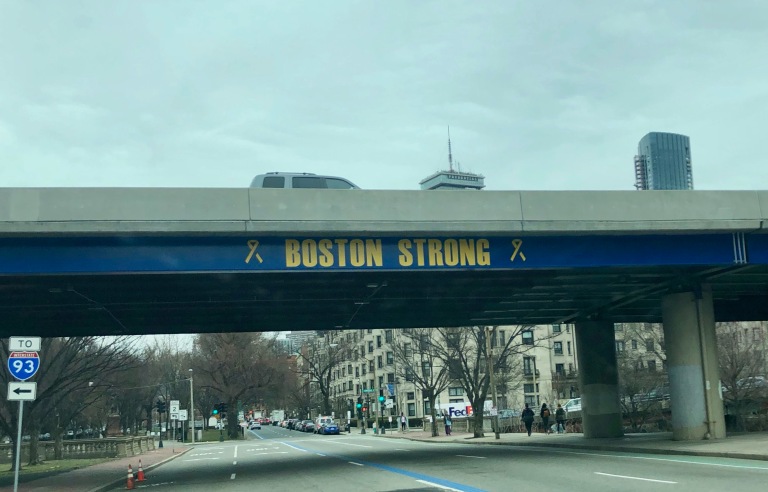 They don’t look so fast in that video though, do they?

Marathon Monday, April 15 Jim was awakened at 3:30am by a phone call from our tenants informing us of the above mentioned flooding.  He gave them instructions to turn the water off to the building and headed into town to deal with the mess.  He found that a plumber had removed a radiator in the unit above us and had not capped off the steam pipes thus causing damage to the floor of the second floor and the bay window area of our bedroom.  The floor was salvaged with the equipment above but the ceiling, window treatments and the wall beyond the windows above were soaked and had to be removed necessitating new wallpaper for the whole large room, new window treatments, totally new room decor and displacing our tenants from the bedroom for the duration of the renovations which are still ongoing.  All of this has caused severe stress in our otherwise peaceful lives.

While Jim was dealing with the flood Sandy went out on the Boston Marathon course with a whole bunch of friends to follow, support and cheer for those that we knew who were running.  We then both met up at our annual post marathon party.

Three days after the marathon we flew to Asheville North Carolina to spend a week with Bob and Gail MacAlpine and visit son Geoffrey and family who live in Marshall NC.

On Friday we spent most of the day with Geoffrey, Sofi, Bhavanii, Freya and our youngest grand child Gaorii Gertrude Wallin-Steen at their home in Marshall.  Since it was Easter weekend Sandy came prepared with eggs, dye and treats for the girls.

Friday evening the Steen family patriarch, Claude, had organized a family reunion with all four Steen brothers at a local restaurant. Thank you Claude & Donna

While in Charlotte NC, en route to Asheville, we received a text from our friend Madeleine Leone that they were headed to Asheville exploring possible places to live.  We had some free time on Saturday to meet them at their hotel for lunch.

After brunch we met Geoff and family at a local park for some play time and had a Méxican dinner with them.

Monday we drove to Geoffrey & Sofi’s home again which is in rural Madison County located within the township of Marshall.  Geoffrey built his home there about 10 years ago and has since added two small lofted bungalows which he rents out on Airbnb.  He has planted his one acre of land extensively with fruit trees, berry bushes and ornamental trees.  His specialty is agriculture but he is quite handy with doing almost anything.  He also puts on classes and seminars in areas which he has expertise.

On Tuesday we took a hike in the Cherokee National Forest at Flags Pond which is just over the state line into Tennessee.  We hiked with brother Philip and his wife Phyllis and brother David and wife Lynn.  We ended up in the wild flower filled woods below with a great picnic lunch provided by Phyllis.  The forest floor was in full Spring bloom mode and as always we learned a lot about the plant life from David, the biologist.

Our last full day in Asheville we took a drive to Kennesaw Georgia, which is just outside of Atlanta, to visit our good friend Lyle Herrmann and his wife Teresa.  Lyle was Jim’s roommate in college and has been very good at staying in touch with all of us.  Bob and Jim’s childhood neighbor Kathleen Smart also accompanied us on the 3 ½ hour drive.  We all enjoyed the visit and felt that it was well worth the drive. 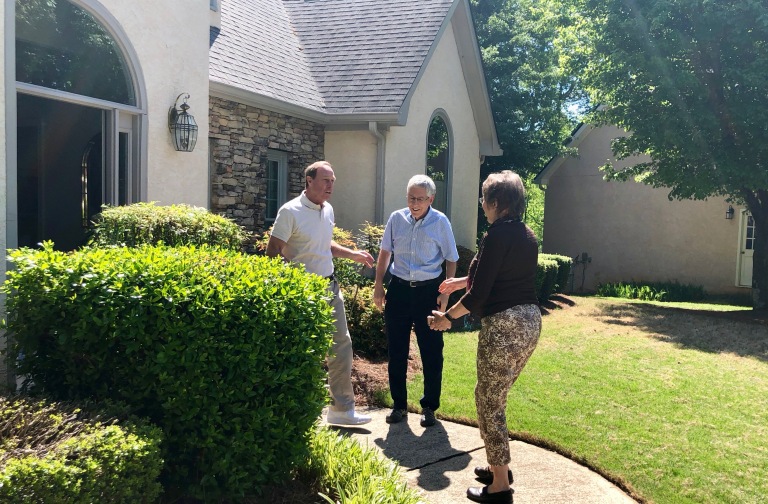 On our return to Boston we had a Friday night party as we had Jennifer’s home to ourselves.  We invited friends that we had worked with 20 years ago at Boston Regional Medical Center before it closed in 1999.

We are moving on, returning to New York City on May 1.