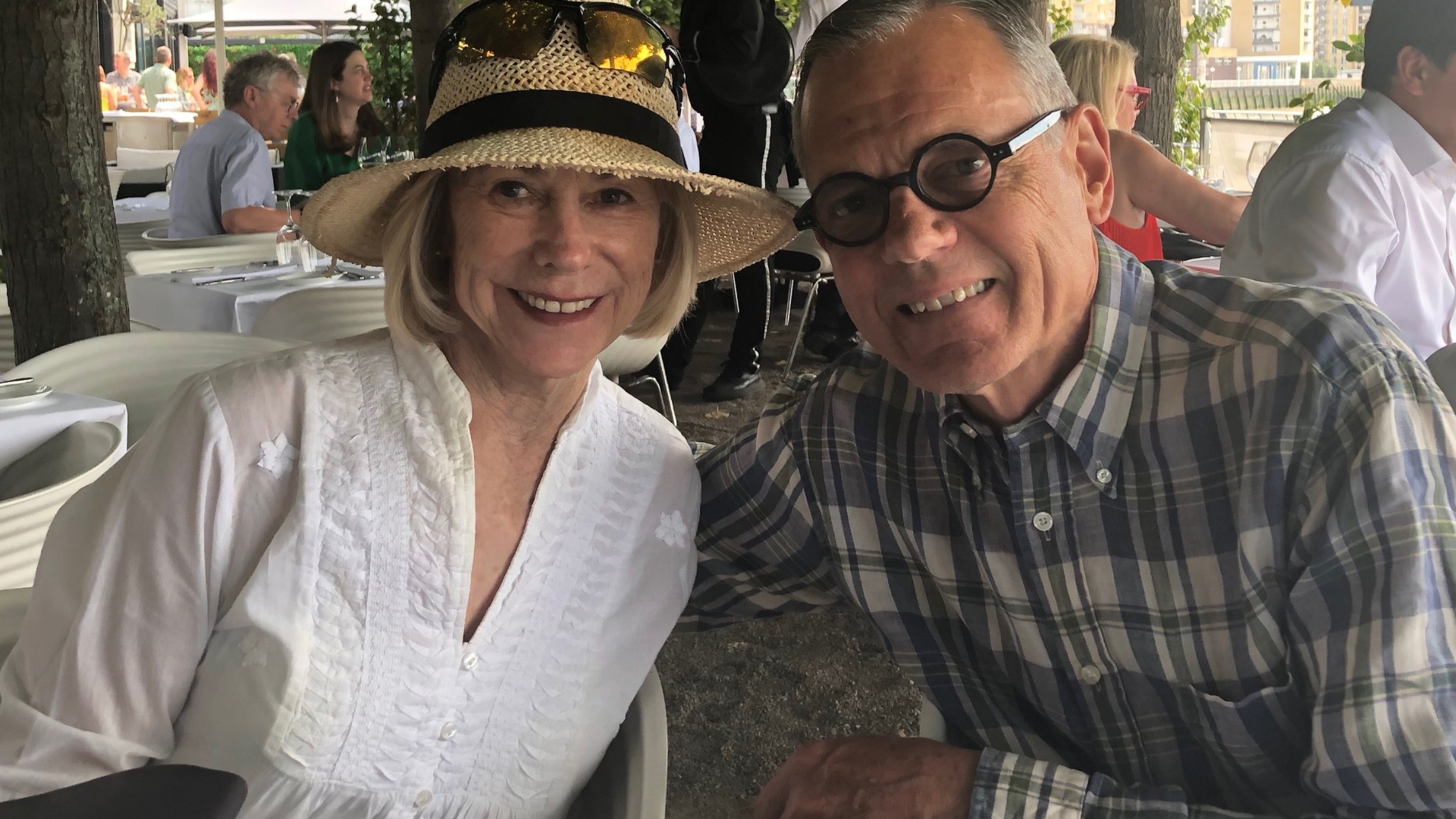 We are leaving London tomorrow, Monday 26 August for a 25 day road trip around England.  Our two months in London have been delightful and have increased our love for this city and country.  The last weeks in any city are always somewhat bittersweet with an emotional mix of sadness about leaving, anticipation of our next destination and an urgency of final explorations and touching base with local friends.  This is a summary of our last few weeks activities.  On August 16 we attended the BBC Prom which is an eight week summer season of daily orchestral classical music concerts and other events predominantly held in the majestic Royal Albert Hall.  Proms is short for promming which refers to the use of standing areas inside the hall for which ticket prices are much lower than for the seating.  Proms concert goers, particularly those who stand, are referred to as “prommers” or promenaders.  We attended Prom 40 which celebrates the 200th anniversary of Queen Victoria’s birth.  The program featured music by her favorite composer Mendelssohn including his lively Scottish symphony and 1st piano concerto performed by Stephen Hough on Victoria’s own gold piano.

We can’t get enough of live performances in London.  The ticket prices are much less expensive than Broadway, New York.  The theatres are small and elegant with practically no bad seats in the house.  We procured same day private box seat tickets at The Phoenix for Come from Away.

We also obtained tickets for Hamilton as it has been such a celebrated hit and highly recommended by many of our friends.

No visit to London for us (mostly Sandy) is complete without walking in the steps of The Beatles.

Many of our morning runs will morph into a whole days adventure as we just follow our whims or leads we see along the way.  We had been running 2.5 miles along the river and through Battersea Park to the old Battersea power station which is in process of being transitioned into apartments and a lively destination with restaurants, cafes, food stalls, busking and other musical events.  The old coaling jetty which opened after our arrival in London has been on our list but we usually arrive before opening time.

The Chelsea Physic Garden is hidden in the heart of London and is both a peaceful oasis in the city and a centre for learning.  It was founded by The Worshipful Society of Apothecaries of London in 1673 for apprentices to study the medicinal qualities of plants.

“Let food by thy medicine and medicine be thy food”.     Hippocrates 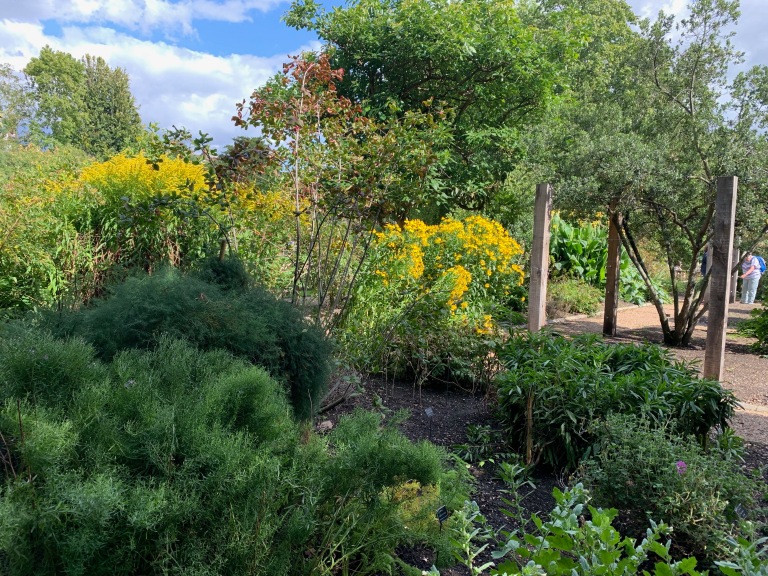 We visited Highgate Cemetery last summer with Dick and Andrew.  They had taken a tour of Highgate West which they raved about so we returned this year for the tour as that is the only way to gain access to the West side.  Highgate Cemetery has some of the finest funerary architecture in the country.  It is a place of peace and contemplation among a romantic but eery profusion of trees, vines, moss and wildlife.  The most famous grave is that of Karl Marx which we saw last year in the east section.  Most recent famous people buried in the west was the pop singer George Michael, 2017, and the former Russian spy Alexander Litvinenko who was poisoned in 2006 with a radioactive substance put in his cup of tea at a London hotel.

Our last planned exploration was to return to Greenwich for at least the fifth time to actually go on the Cutty Sark, which we first ran by in the 1999 London Marathon, and to walk under the Thames via the Greenwich foot tunnel.  The Cutty Sark is a British clipper ship built in Scotland for shipping magnate John “Jock” Willis and launched in 1869.  She was one of the last tea clippers to be built and one of the fastest.  We toured this amazing ship with a copper clad wooden hull and a massive iron frame.  There were many interactive videos and displays to help us learn what life was like aboard the ship back in its heyday. 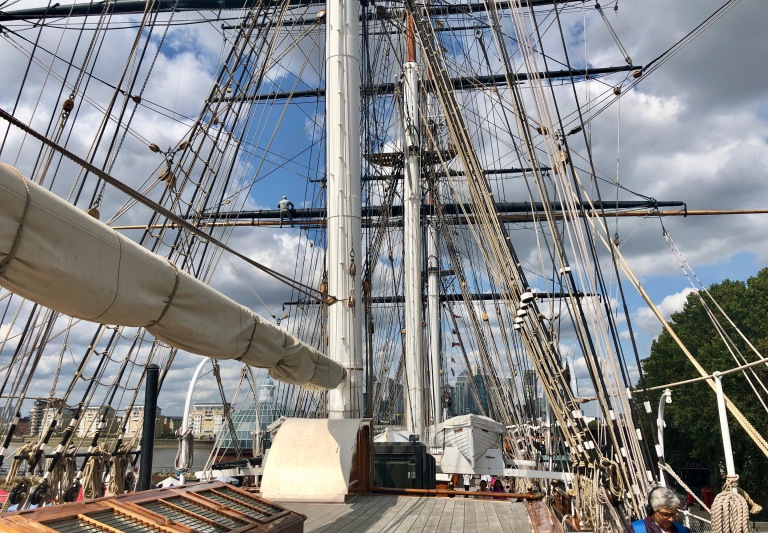 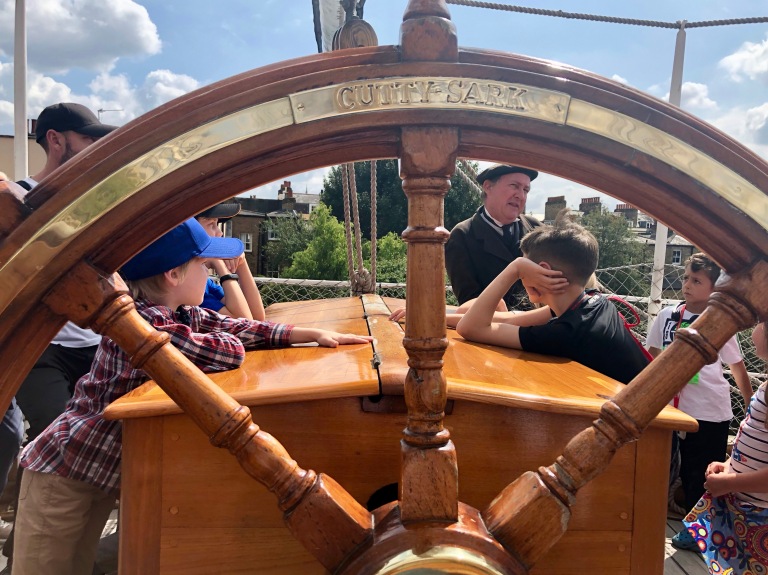 The Greenwich foot tunnel constructed in 1902 runs beneath The River Thames between Island Gardens on The Isle of Dogs and Greenwich with an entrance/exit next to the Cutty Sark.  It is a public highway for foot traffic only and has spiral staircases and lifts at each end.

Our final week with friends in London started with a meal on our terrace with Sigi & Paul.  They hosted us three times at their home in Richmond last summer after an email introduction from our good friend and Boston neighbor Peggy Scott.  It was our great pleasure to be able to reciprocate their hospitality.

Another email introduction by Peggy was Anthony Howick and Judith Hemery his wife.  Judith and Anthony are also very close friends of Sigi and Paul.  Needless to say, Peggy has provided us with some great connections in England.  We went to their house in Hampstead Garden Suburb for a home prepared gourmet meal by Anthony.  It was an evening of great conversation, great food and a new friendship was formed with plans for meeting up again on the Scilly Islands with Judith, Anthony, Sigi and Paul.

We also reconnected with Janine who we met last summer through our New Zealand friends Helen and Sue.  Sandy queued at Wimbledon with Janine, we had a meal at her home in Kensington and a meal out with Helen, Sue, Janine and her husband Jerry.  We met Janine for morning tea at the Cafe of the V & A Museum.  It was very nice to be able to catch up on each others lives for a few minutes.

Yesterday we reconnected with another UK friend, Sue Klesniks who lives an hour north of London by train.  She took the morning train to London and we spent the whole day and evening reminiscing about our past meetings, Tuscany in 2015 and London last summer.  We met Sue through our mutual friends Sue and Helen (see above) when we all spent two weeks in a farmhouse in Tuscany in September of 2015.

So our time in London is fast coming to an end as we are packing up for a road trip around England planned mostly by our new friend Anthony Howick.  In closing, thank you so much to all of our friends who follow our travels and send us messages of encouragement and especially for the introductions to your friends who have made our travels so extra special.