Day #26 of our road trip is spent driving about four hours back to London stopping for breaks every hour or so.  One long stop was in Taunton where Sandy did some shopping and Jim relaxed at an outdoor cafe.  Upon arrival back in London we stayed in Richmond which is a suburban town in southwest London on a meander of the river Thames.  Our friends Sigi and Paul live there and had insisted that we spend our last night at their home despite the fact that they were away in Scotland.  It was such a kind gesture and made it so convenient as they even provided parking and we were only 20 minutes from Heathrow where we departed for Berlin.  The two hour flight to Berlin was uneventful, so uneventful that they did not even offer us a drink of water in business class.  We were happy to see our good friend Dick waiting for us after coming through passport control.  Oh but wait, where is baggage claim.  Oh no, we messed up and did not pick up our baggage.  You would think that with being experienced world travelers we would not make this mistake, but we did and they would not even consider letting us back into the gate area.  We had to stand outside the exit from the gate looking for a stranger to stop before exiting and have them go back and find our three pieces of luggage.  Fortunately we connected with a driver waiting for a passenger and he asked her to go back in and fetch our luggage which she did.  We then found out that this driver worked for Cher and it was Cher’s wardrobe assistant who ended up retrieving our bags.  Cher is performing in Berlin on her “Here we go again” tour which falls on the one year anniversary of Mama Mia 2 in which she starred along with our actress friend Amanda Seyfried who lived in Dick’s unit upstairs from us in Boston when she filmed Ted 2.  We left the airport feeling very blessed and also happy that we can now stalk our stalkers Dick and Andrew.

Andrew meeting us at their home.  They occupy the ground floor.  Window boxes on the right are theirs.

Henry was very happy to see us.  He spent his first year in Boston.

Just chillin in their living room. 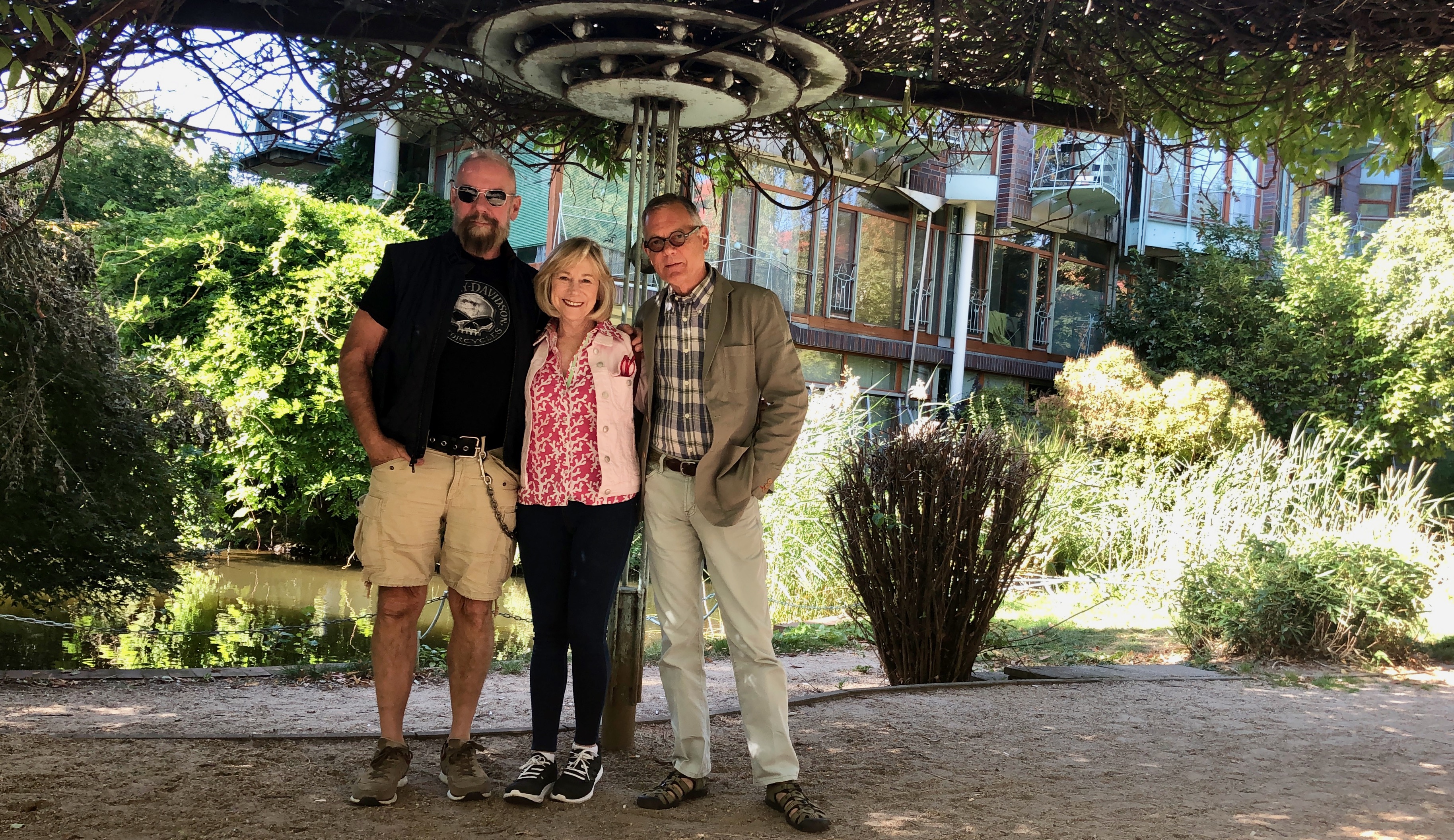 Spent too much time at this flea market, for Jim, everyone else was happy.

After the flea market we visited Thai Park.

For over 20 years the Berlin Thai community have been congregating in this park on weekends to hang out, cook, eat and celebrate Thai food culture.  We did sample some of the food.

Walking up Teufelsberg, literally ‘Devil’s Mountain.’  This is an artificial hill created by war rubble on top of a Nazi training school which was literally so sturdy that attempts by the Allies to destroy it failed, so they covered it with war-rubble instead.

Teufelsberg is now home to a Graffiti artists colony.  The owners do charge an admission fee to visitors.

This was initially a listening post where the US and Britain actually listened to everything going on in Soviet controlled East Berlin. 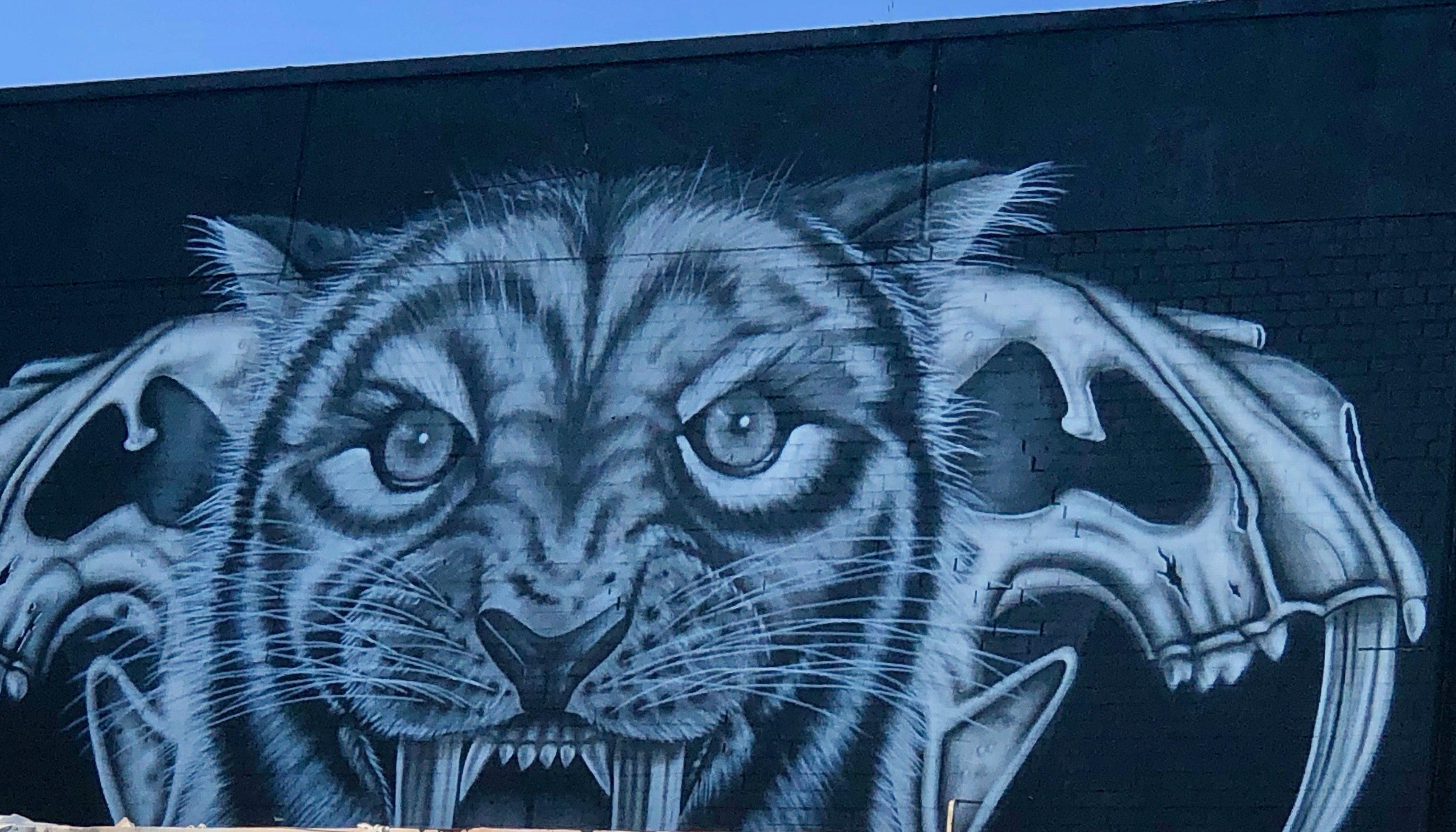 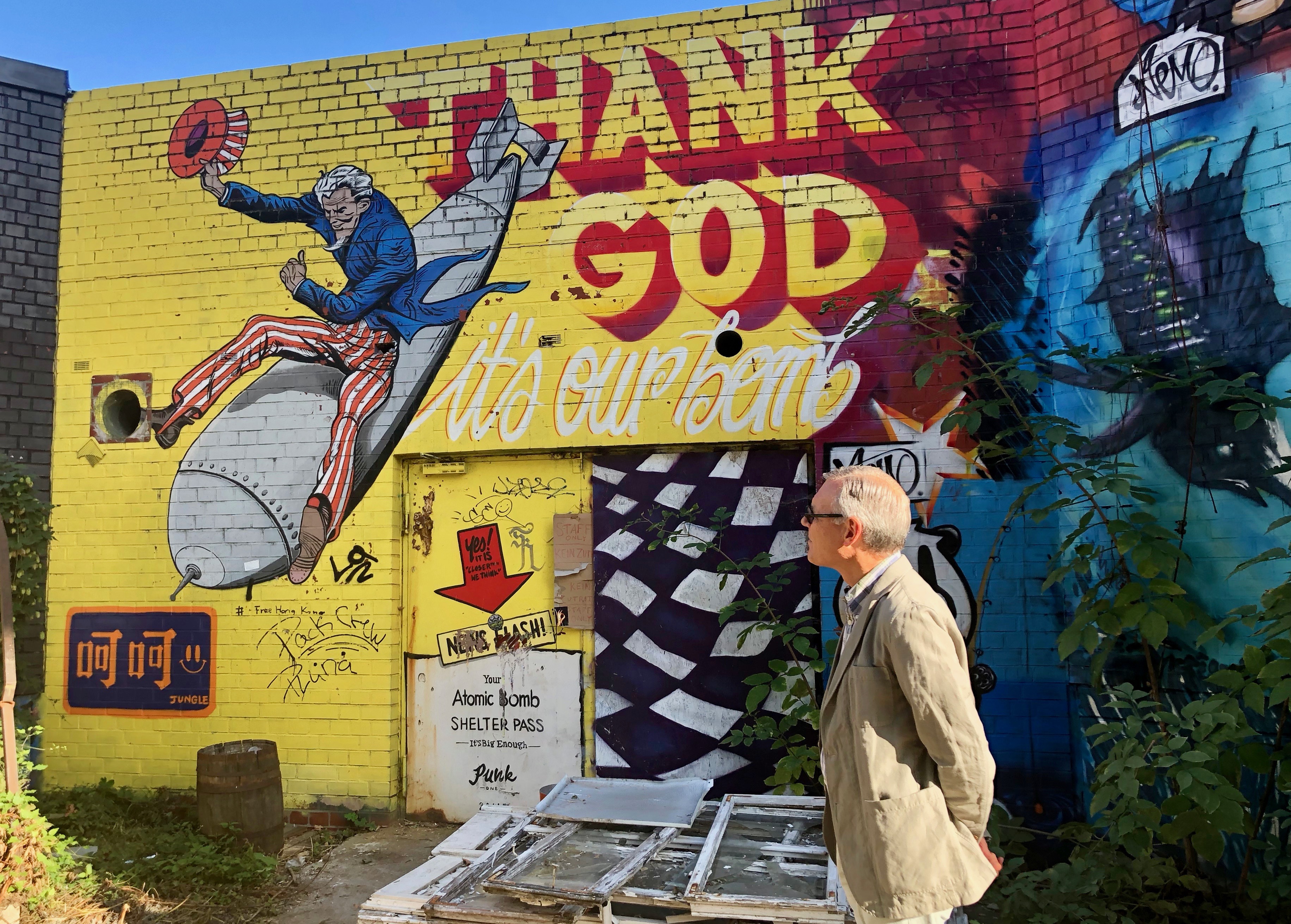 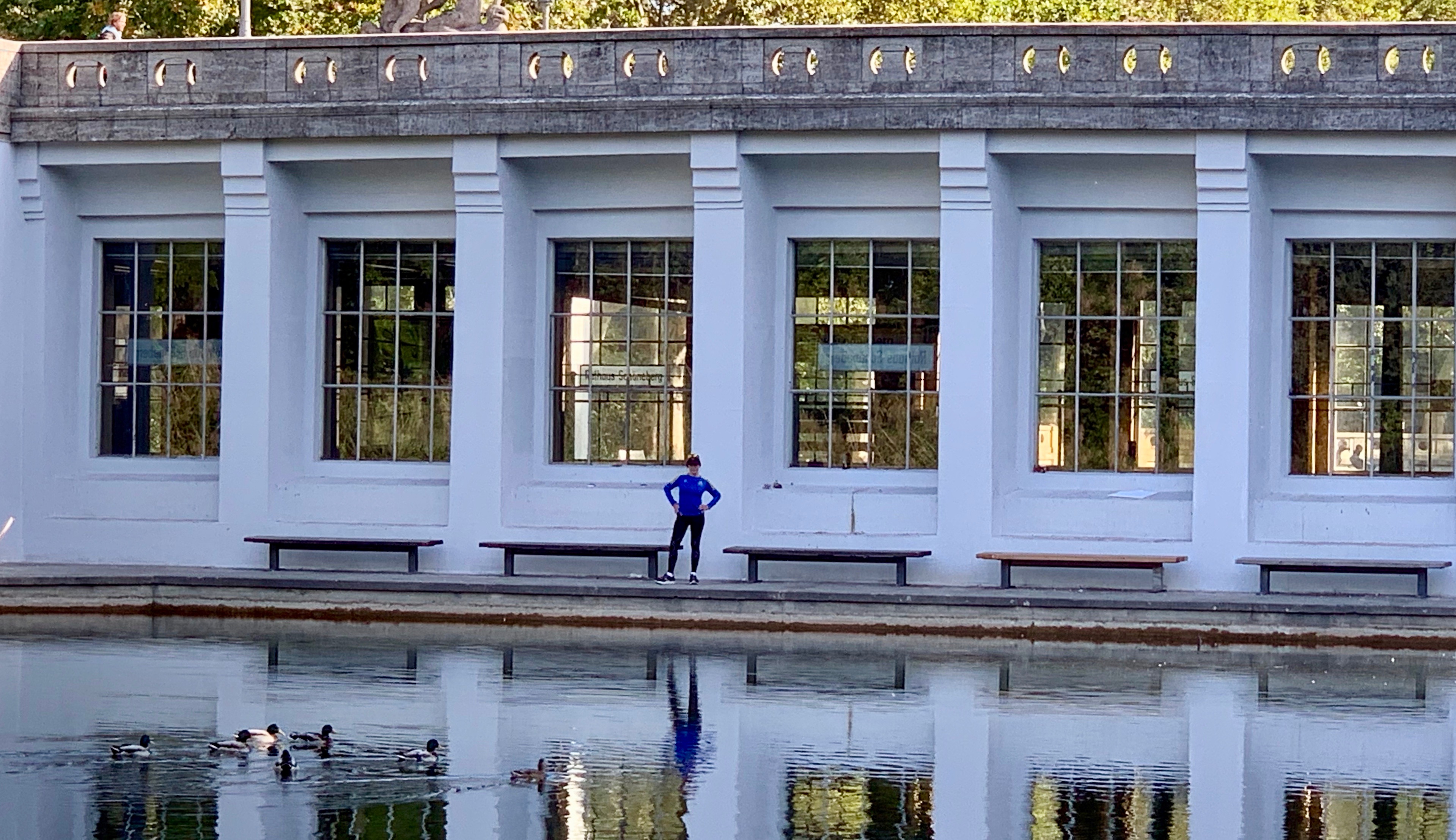 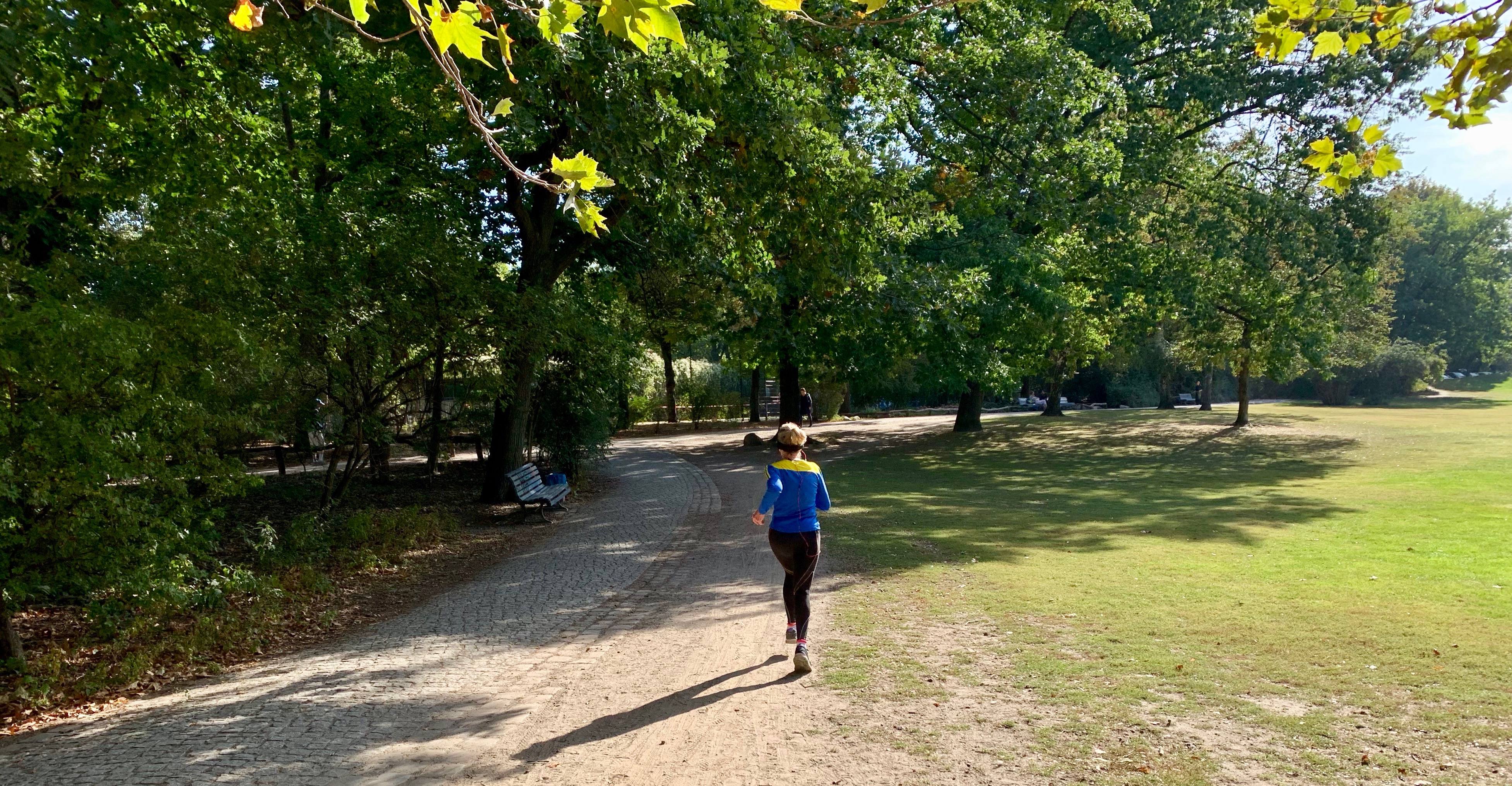 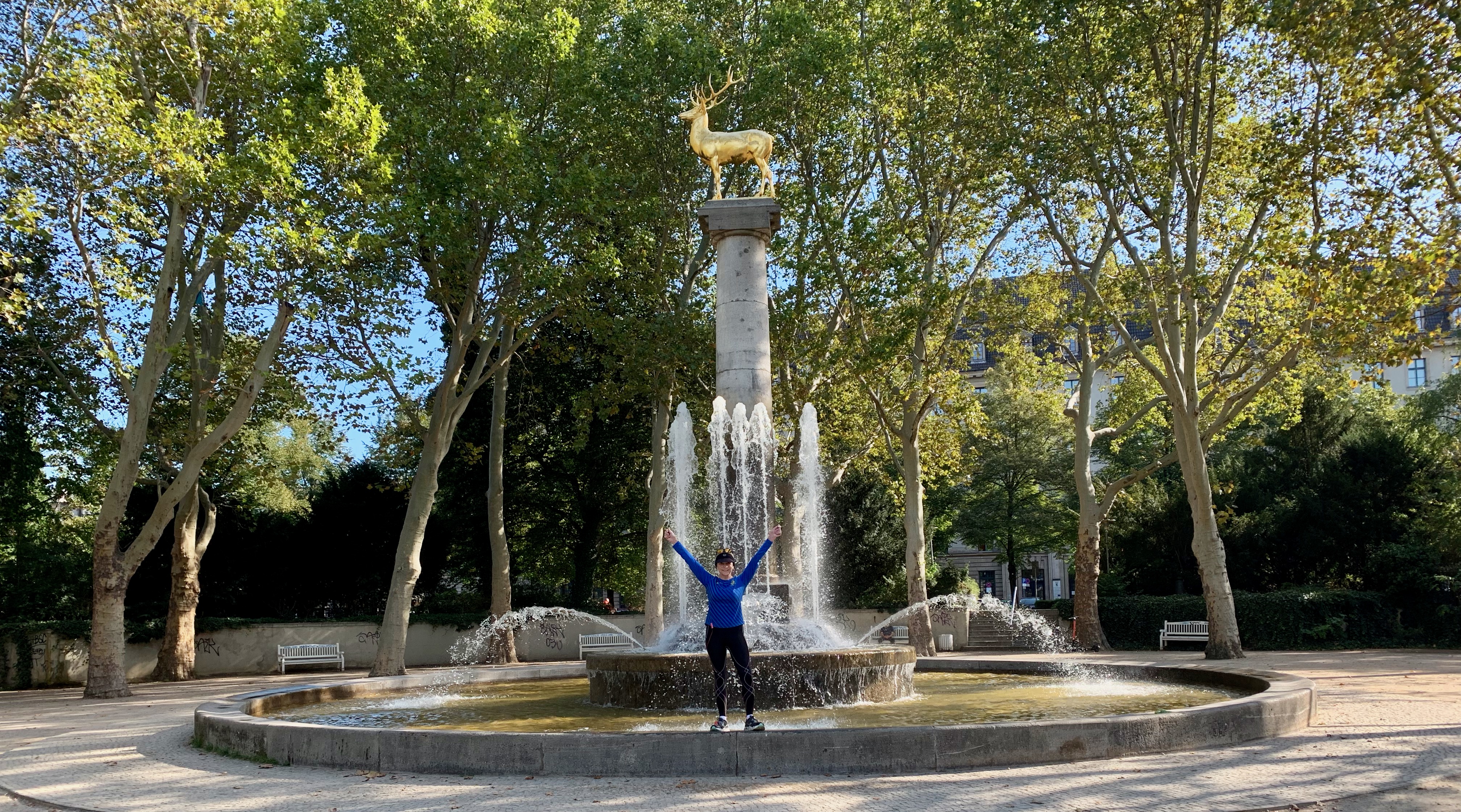 This is a Berlin Hospital where we went to visit a critically ill Boston friend who has since died.

Our friend was receiving state of the art care but the hospital looked like a ghost town.

This is the hospital lobby, completely deserted with very few signs.

We took a long walk around Berlin on our own.

We walked to the Marathon route and followed its elegant start and finish routes.

This is The Victory Column in the middle of The Tiergarten.

Republic Square and The Reichstag.

We came to Berlin to support our running friends Gayle Oulighan and Deb Camara who are running the Berlin Marathon in pursuit of completing the six major world marathons: Boston, New York, Chicago, London, Berlin and Tokyo.  The world major classification is based on size and renown.  The Berlin marathon was founded in 1974 by a Berlin baker.  There were 244 finishers including ten woman.  Now, 45 years later it is one of the largest most prestigious marathons in the world and boasts the fastest times due to a very flat circuit, cool conditions, well maintained roads and Germanic efficiency.  On Sunday 29 September over 61,000 runners will participate in the BMW Berlin Marathon.  Marjy, Deb, Gayle and family arrived Wednesday September 25.  We hosted a pizza party at Dick and Andrew’s condo.

On Thursday we said goodby to Dick, Andrew and Henry.  They are returning to Sitges Spain to oversee the final stages of renovations of their new home there.

Best friends, stalkers, neighbors and world travelers for many years.

Ready to start out on a 20 hour/2 day drive through Germany, France and Spain to Sitges.  Henry is already resting comfortably in the car.

We then met up with our running friends and had a wonderful “Get your guide” tour with Carlo.  We spent three hours on a walking tour to see the top 20 sights in Berlin.  Carlo was very engaging and the three hours went by quickly.  He gave us extra time to enjoy a nice coffee break rest halfway through the tour. Aside from seeing the attractions, we especially enjoyed hearing stories of what it was like for Carlo living in the American sector of West Berlin.  He was 15 years old when the wall came down.

The white building is Angela Merkel’s present government home on the river Spree. 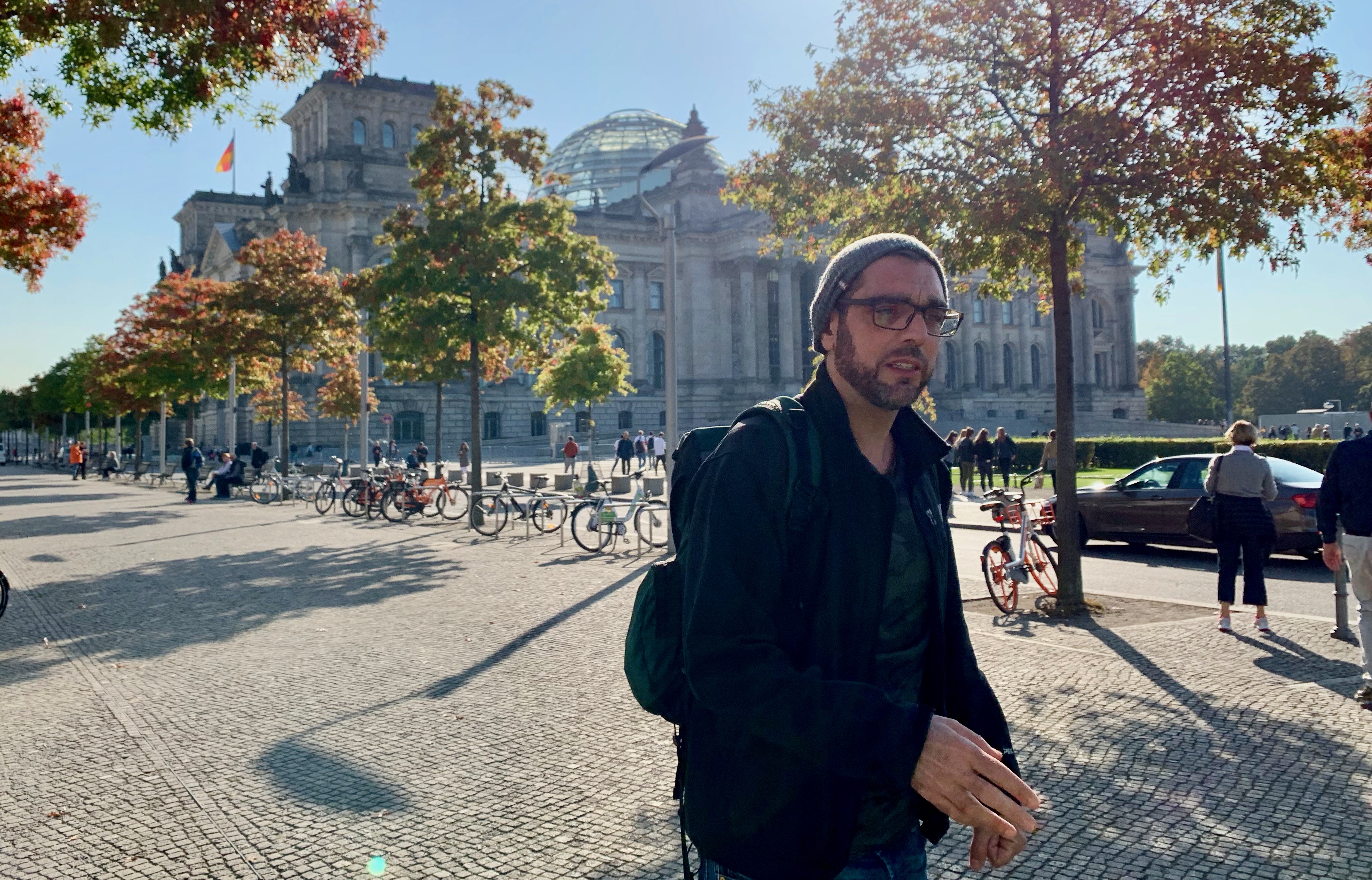 Our guide Carlo in front of The Reichstag. 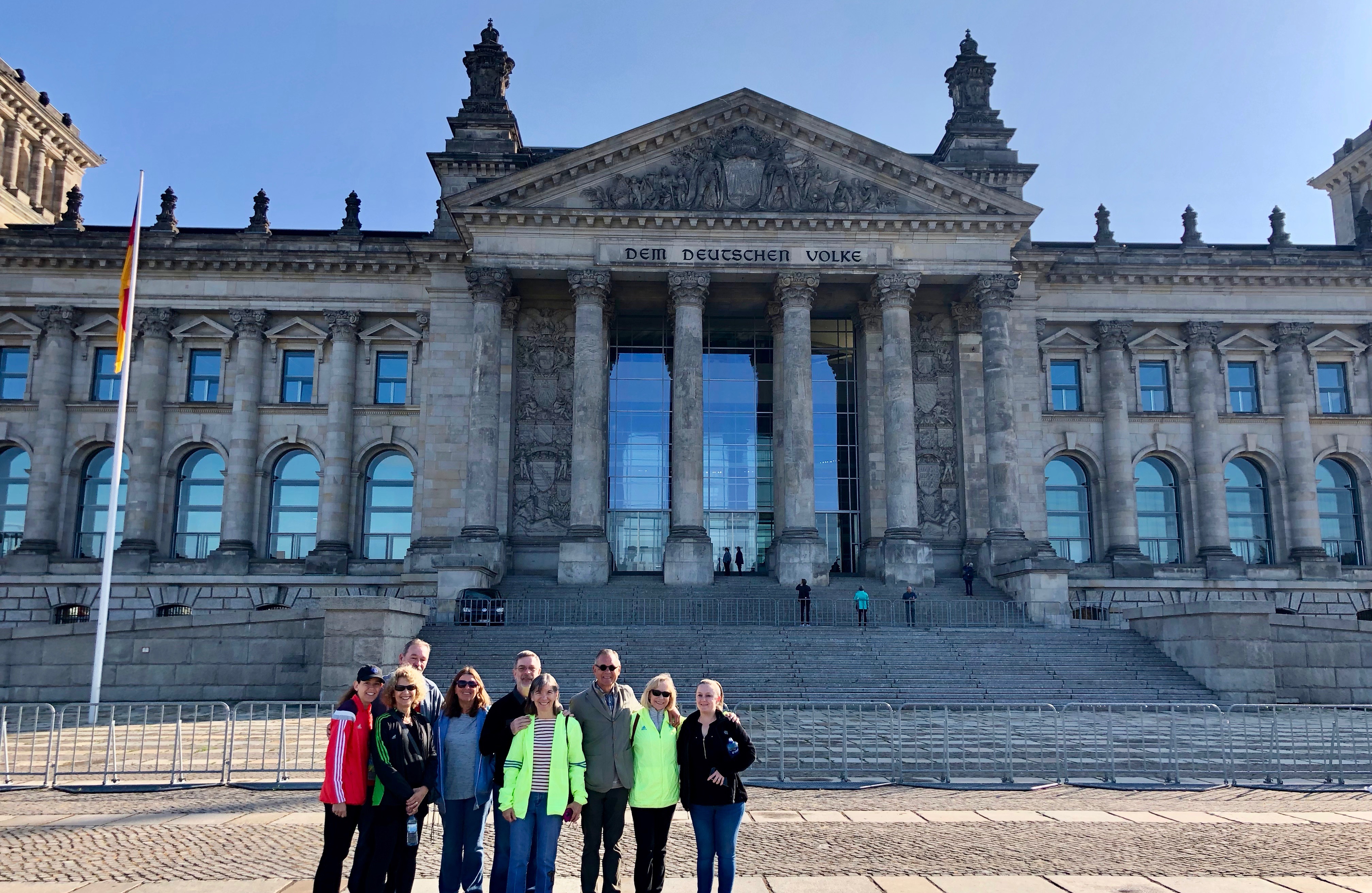 Memorial to the Murdered Jews of Europe. 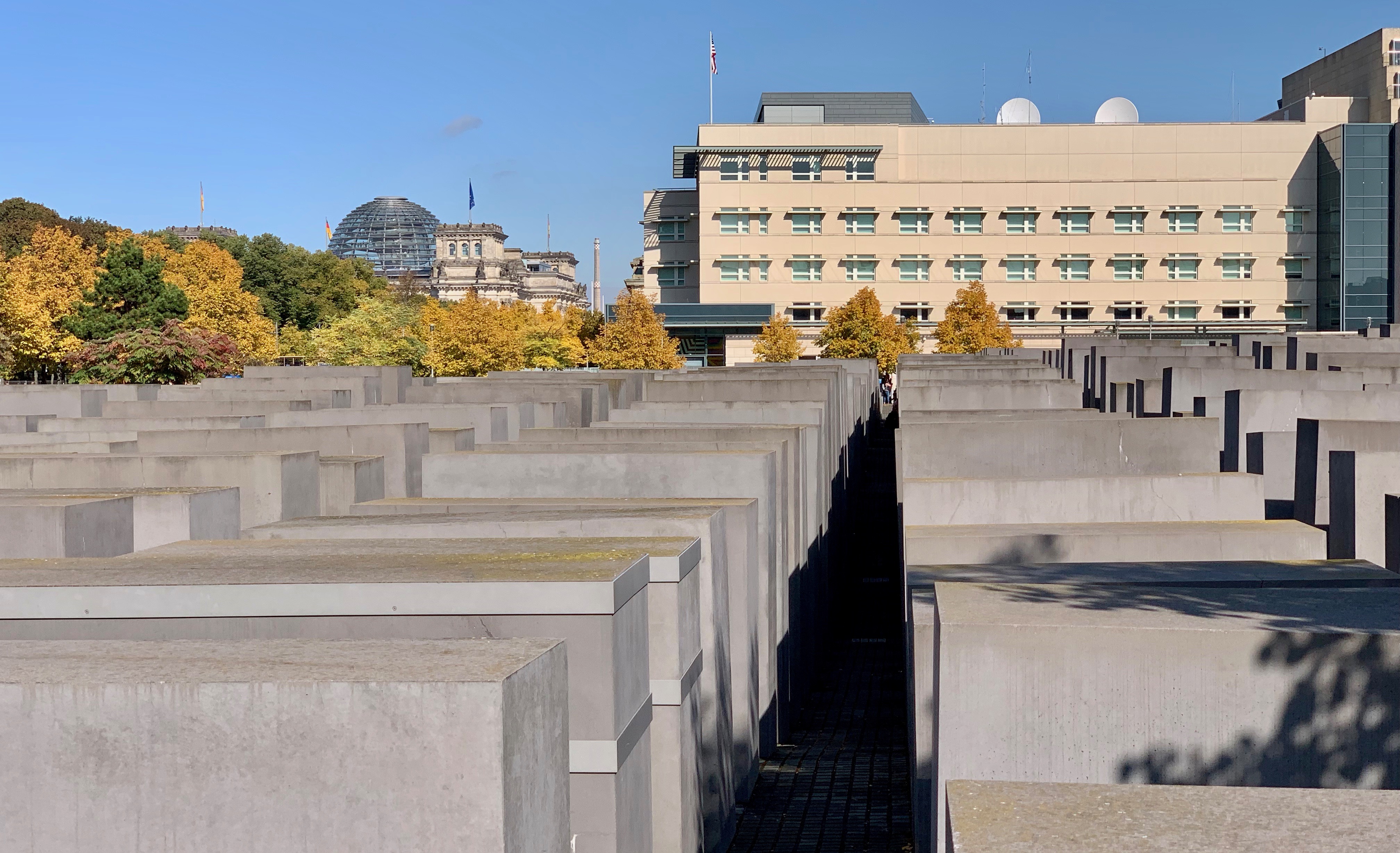 American Embassy next to the memorial.

Remains of The Berlin Wall. 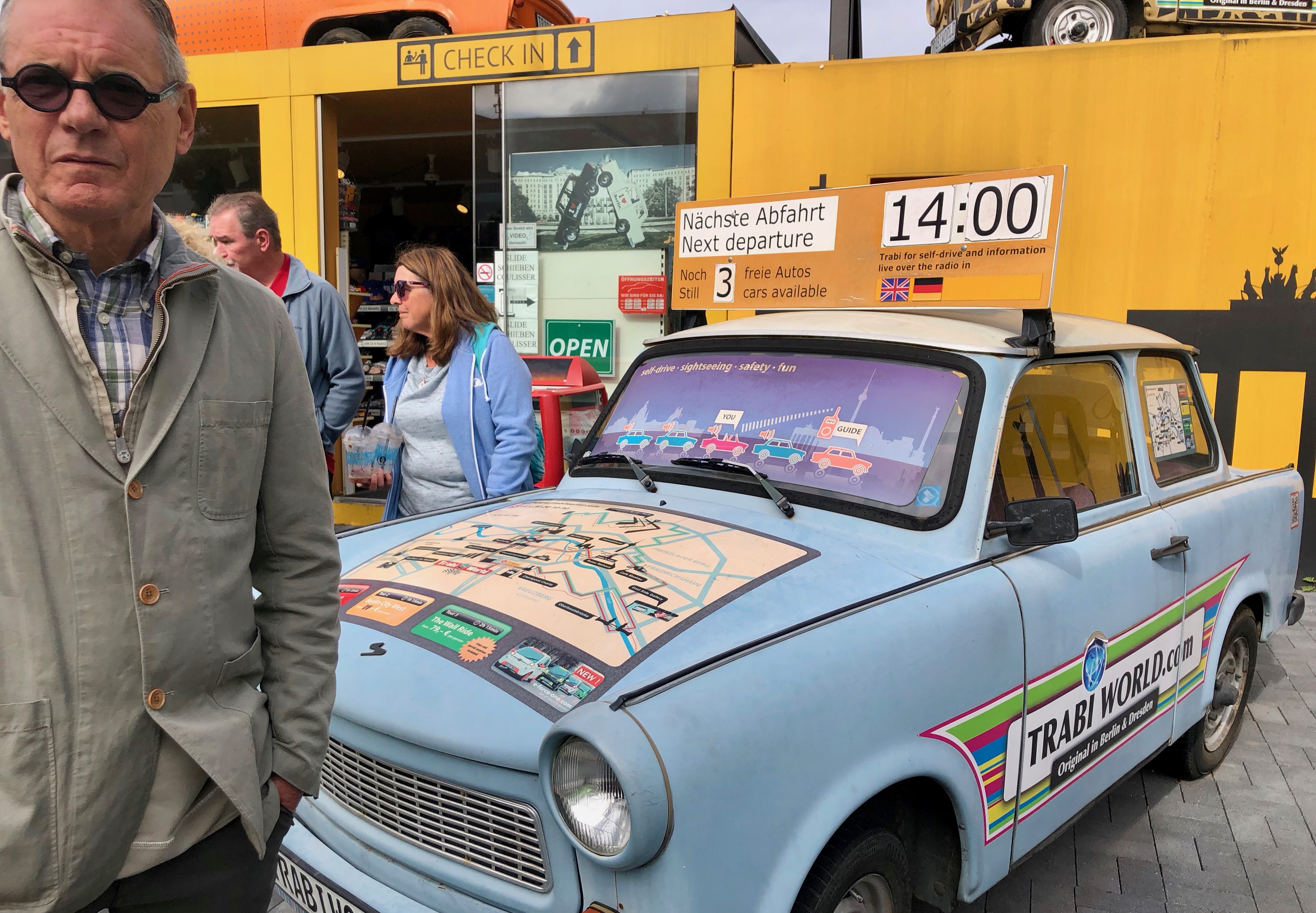 Tours being offered in the remaining Russian cars.

After the tour we all headed over to the marathon expo which took place in Berlin’s Tempelhof airport buildings.  The airport was built in the 1920’s and it ceased operating in 2008 and is now used as a recreational space.  In September 2015 it was announced that it would also become an emergency refugee camp.  The expo was very big and was housed in two hangars of the former airport.  We spent several hours there as this is a favorite traditional thing for marathon runners to do. 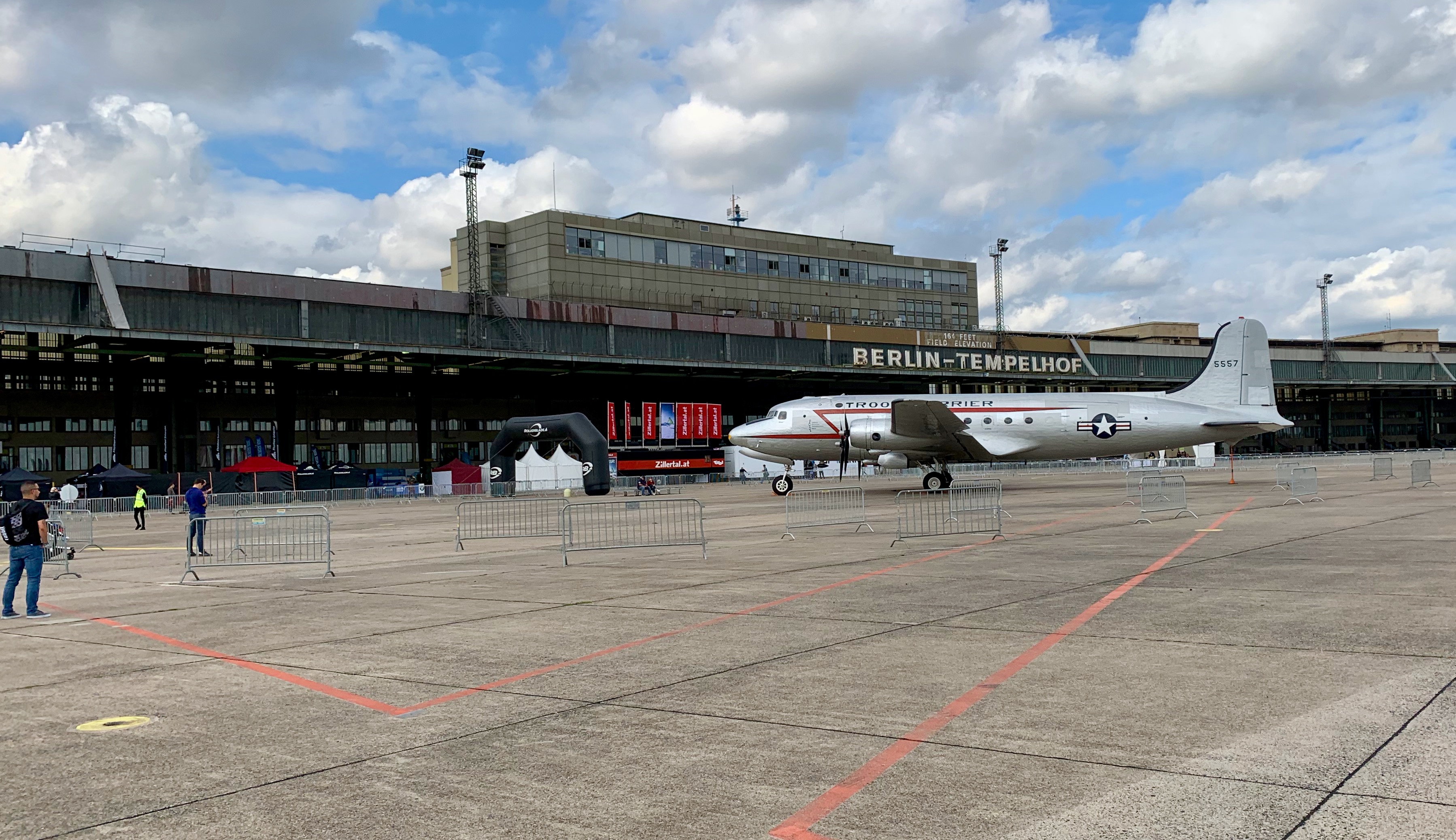 We had dinner at a nearby Biergarten.

Friday we took a six hour tour by train to Potsdam.  The guide, Julian, was very tall and handsome and spoke perfect English as he was from Toronto.  Potsdam is a world heritage sight.  It is very picturesque and brimming with fascinating history.  We learned too much about Prussian kings and walked a mile through the Never Garten.  We saw the Sans Souci palace.  This was the home of Frederick the Great.  As you can see from the pictures we did not enjoy the weather and returned home very wet, tired and hungry after covering 8 miles.

St. Nicholas church.  Note the absence of Jim, Mike and Melanie who all opted out of this trip for different reasons.

San Souci, summer palace of Frederick the Great.  Sandy was disappointed not to be able to go inside.  We had been here before and it was undergoing renovations.  Sandy returned specifically to tour the inside.

Grave marker of Frederick the Great.  He introduced the potato to Germany which explains the lower left collection.  He was buried beside his nine dogs.

Park Charlottenhof with palace behind the wet bedraggled crew.

Schloss Cecilienhof, palace home of crown prince William of Prussia.  This is the site of The Potsdam conference attended by President Truman, Winston Churchill and Joseph Stalin.

Our last stop of the tour was the Glienick Bridge.  This bridge was used by the CIA and KGB for spy swaps including U2 spy plane pilot Gary Powers.

Coming up next is the BMW Berlin Marathon.