So Peggy dropped us off at the Air France departure area of terminal 4 at Logan and there was no flight leaving from there.  We had to walk across to the other side of the airport to Delta at terminal 1 as we had booked an Air France flight which was run by Delta.  Waited in a long line to drop our bags off and the large bag was 8 pounds or $100 overweight.  Had to do some quick re-packing, removing 6 pounds to other suitcases or carryons.  We still had 20 minutes to get a glass of wine, cheese and crackers at the wine-bar.

Flight was 7 hours.  Sandy watched 1.75 movies and slept about two hours.  Jim watched one movie and dozed a little.  Took the train from CDG to Paris, transferred to the Metro getting off at the Opera stop and walked to the W hotel.  Checked into a beautiful suite, with a view of the opera house, at 8 AM and slept till 1 PM.  Checked out and took a cab to our small VRBO in the 6th arrondissement in Saint Germaine de prés.  The place is small with steep narrow stairs to the upstairs bedroom & bath, but it is quite adequate for us and ideally located.  Our living room window seat looks onto a cobblestoned walking only street which is lined with cafés and other shops. 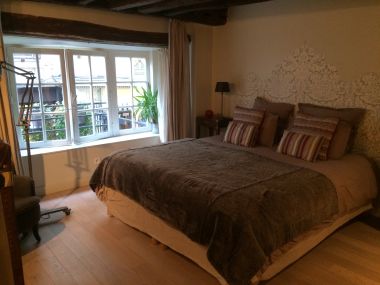 Went out for a quick lunch at Paul Restaurant which at one time was a bakery but now serves sandwiches & simple meals.  We have since then found out that it is a world wide chain with a storefront in Boston.  Sandy had quiche Lorraine and Jim had a potatoe pancake with salmon.

We returned to our VRBO and unpacked.  At 6PM we met up with Nicholas for our “Midnight in Paris” private tour in his 1968 Citroen with an open roof.

Nicholas is a 30 something who resembles a cross between Nicholas Cage and Jake Gyllenhall and he drives the narrow crowded streets of Paris like he is in a movie chase scene. The tour covered several arrondissements of Paris which included many secret spots.  He served us champagne on the steps of Eglise Saint-Etienne-Du-Mond which is featured in the movie “Midnight in Paris” where Owen Wilson meets up with Ernest Hemingway.  He took lots of wonderful pictures of us during the four hour tour and dropped us off at Restaurant Polidor in Saint Germaine de Pres where we had a very late dinner of boeuf bourguignon & grillade of lamb with flageolets. We have also learned since then that the Restaurant Polidor is also featured in the  movie.

It was a memorable first day/night in Paris.