Friday March 30 was our day of preparation for the beginning of the Easter weekend and the six days of Passover.  Our local hummus guy and the Falafel kiosk are both closed for the next six days.  We stocked up on soup and hummus from Micha who makes the best soups and hummus which we purchase to eat at home.  We also ran to the Port Market which has become our Friday go to for fruit and veggies. 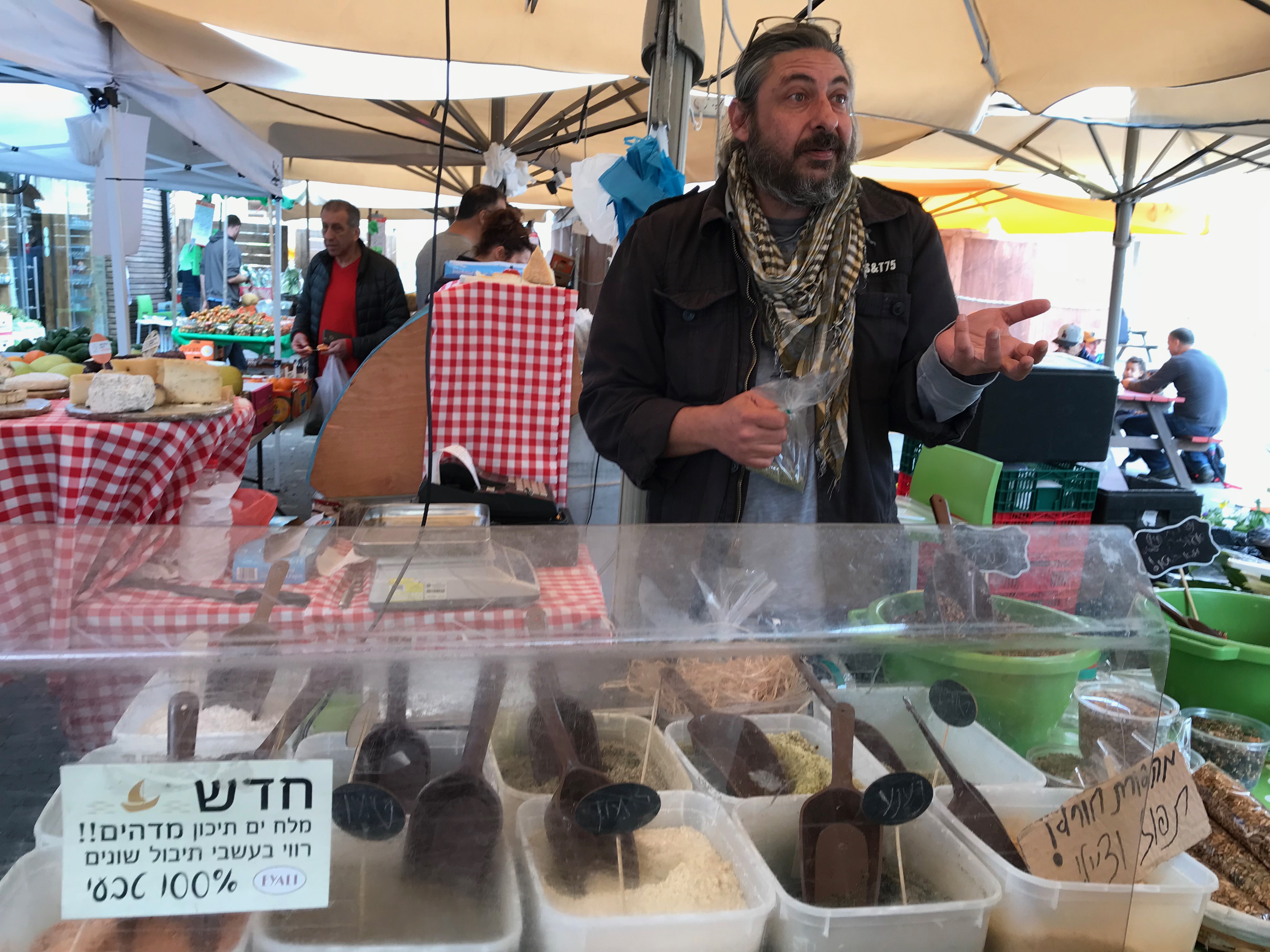 This guy is selling wonderful flavored salts.  He was so interesting, born in NYC, moved to Jerusalem at 3 months of age and has lived all over the world since. 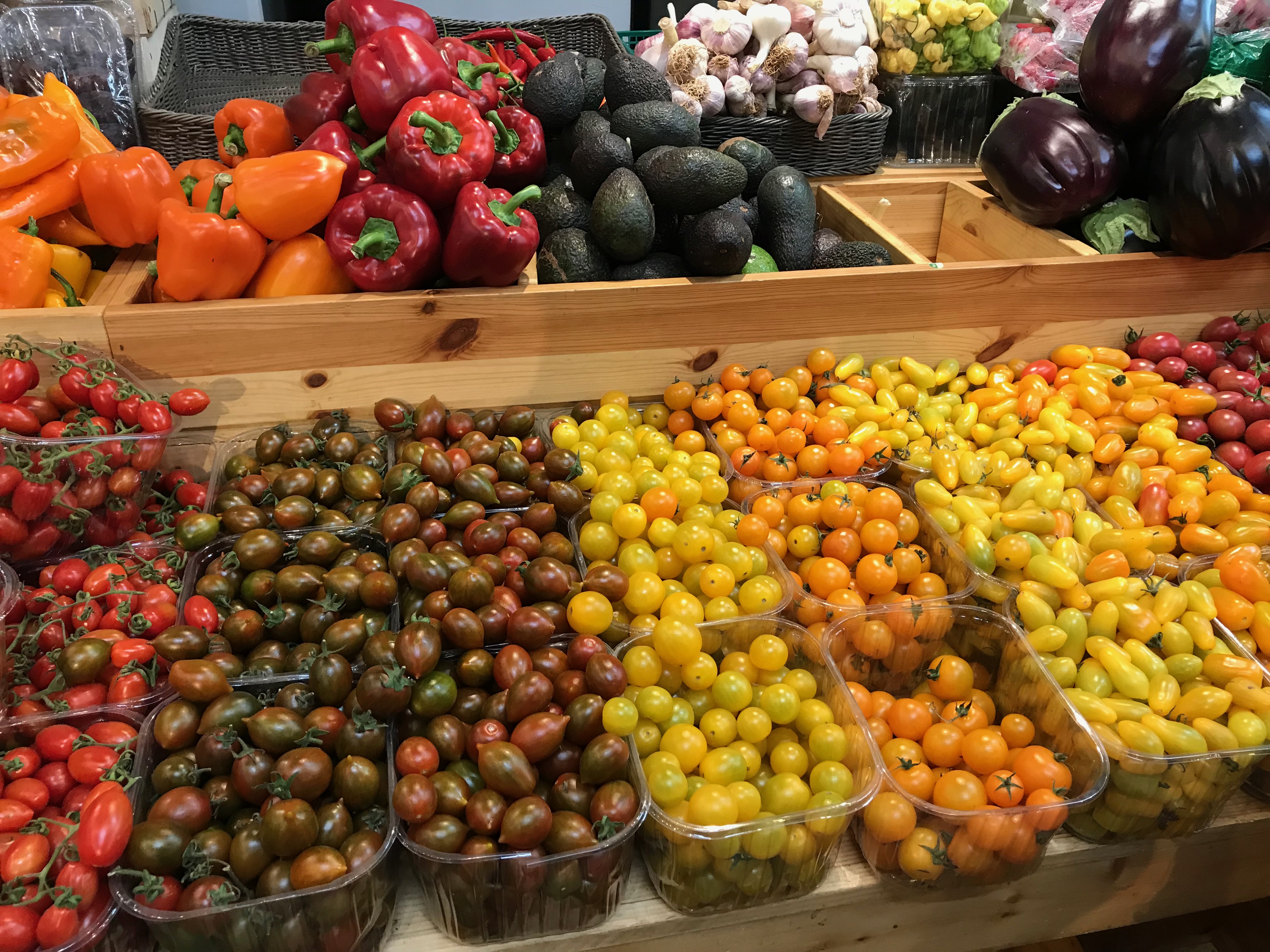 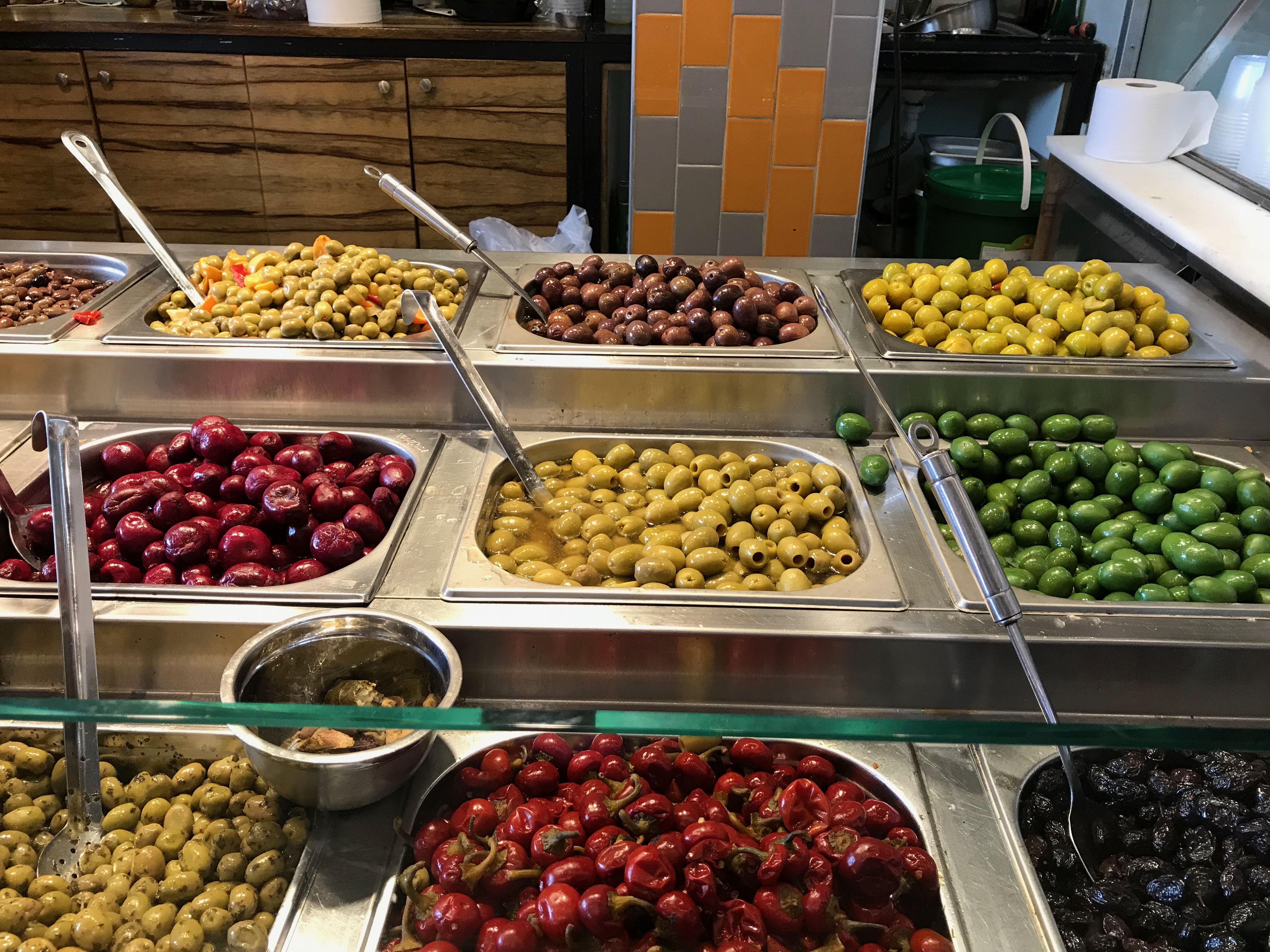 After shopping we noticed some people eating a large hot dog which we decided would be the perfect breakfast after running.  It was advertised as Spanish veal with garlic aioli, onions and sauerkraut. We split that and one beer for a perfect start to the Passover/Easter weekend. 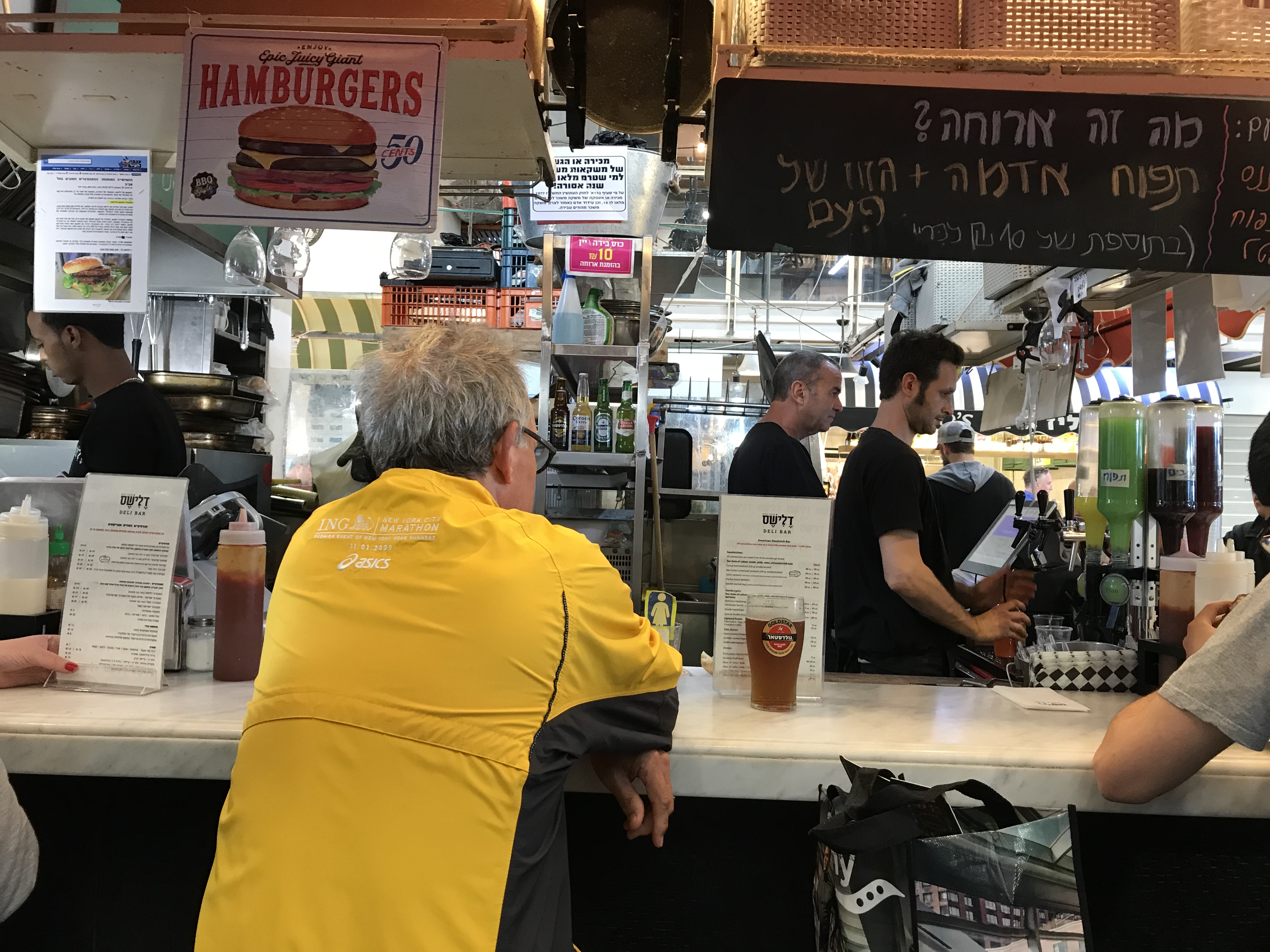 Jim still has bedhead, but what the hell, we are retired.

Later on Friday we received an email from our Airbnb host Guy inviting us to his home for a Saturday barbecue.  We took a taxi for a change as there is no public transportation on Shabbat and he lives about 8K away which would be a long hike, especially with two bottles of wine and a plant which Sandy purchased as a gift.  Guy lives in a large ground floor flat with a good sized rear yard which is quite unusual in Israel as the majority of people live in apartment buildings.  This area was only built up in the past few years and was fruit orchards only 6-7 years ago.

Large back yard with numerous fruit trees and herbs which Guy’s brother in law planted.

We really enjoyed getting to know his wife, three kids, his parents and other family.  The home grilled meal was spectacular and much appreciated.

It was really nice to be around kids and “family” for the holidays.  Not that we have ever been lonely since starting this little adventure just over one year ago.  We actually moved out of our home in Boston on March 25 of last year.

Easter morning Jim was up for the 6am sunrise.  We can see both sunrise and sunset from our top floor perch.

After completing the Sunday crossword Sandy had the brilliant idea for us to walk the 3.3 miles to Jaffa as she wanted to at least get inside St. Peter’s church which closes from noon to three.  We walked out our front door at 10:45 and power walked down the beach promenade arriving at the church front door at 11:45.  We sat in the cool darkness of the church resting and meditating until the Franciscan monk threw us out just before noon. 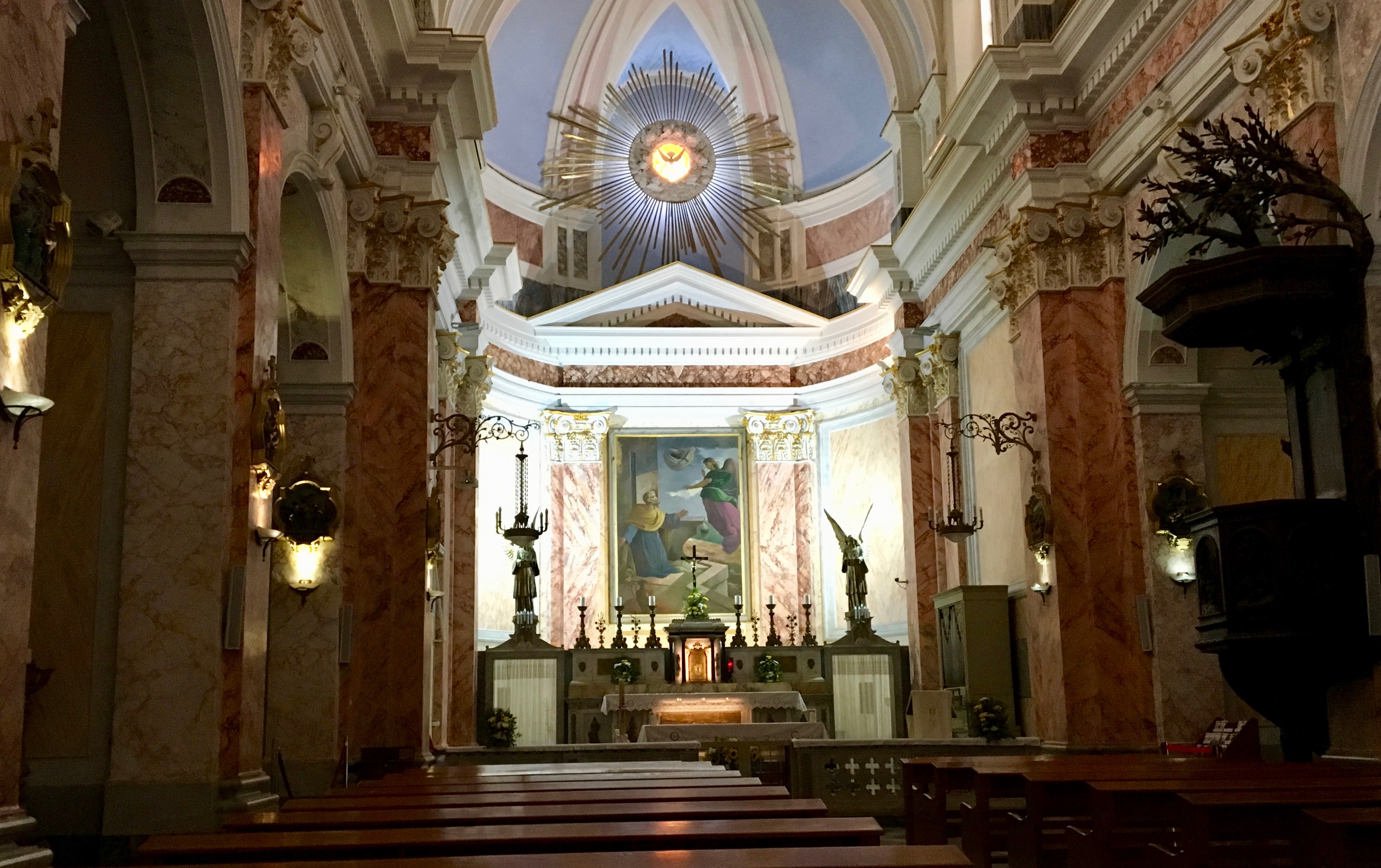 Jaffa is a small very old town with narrow meandering up and down walking streets lined with art galleries, small shops and lots of residences.  Once out of the old city there is a lot of foot and car traffic and a lot more shops and restaurants.  While at the UN last December we had been given a number of recommendations by the Israeli’s on our tour and we decided to try The Old Man and the Sea on the port waterfront which they had recommended.  We were there just before the Sunday lunchtime rush began.  They seated us immediately and less than two minutes later a waiter appeared with a huge tray of 22 salatim, bread and a pitcher of lemonade.

We ordered ½ bottle of wine, shrimp with garlic, lemon & butter and fried calamari.  As with almost all food here everything was extremely fresh and very tasty.  The amazing thing was watching the waiters fly around serving the huge lunch hour crowds.  They were literally running at times.

Not too many leftovers.

After lunch we walked along the port waterfront savoring the Mediterranean views and watching family’s enjoying their Sunday afternoon together.  This is a holiday week in Israel with no school and a lot of people taking vacation. 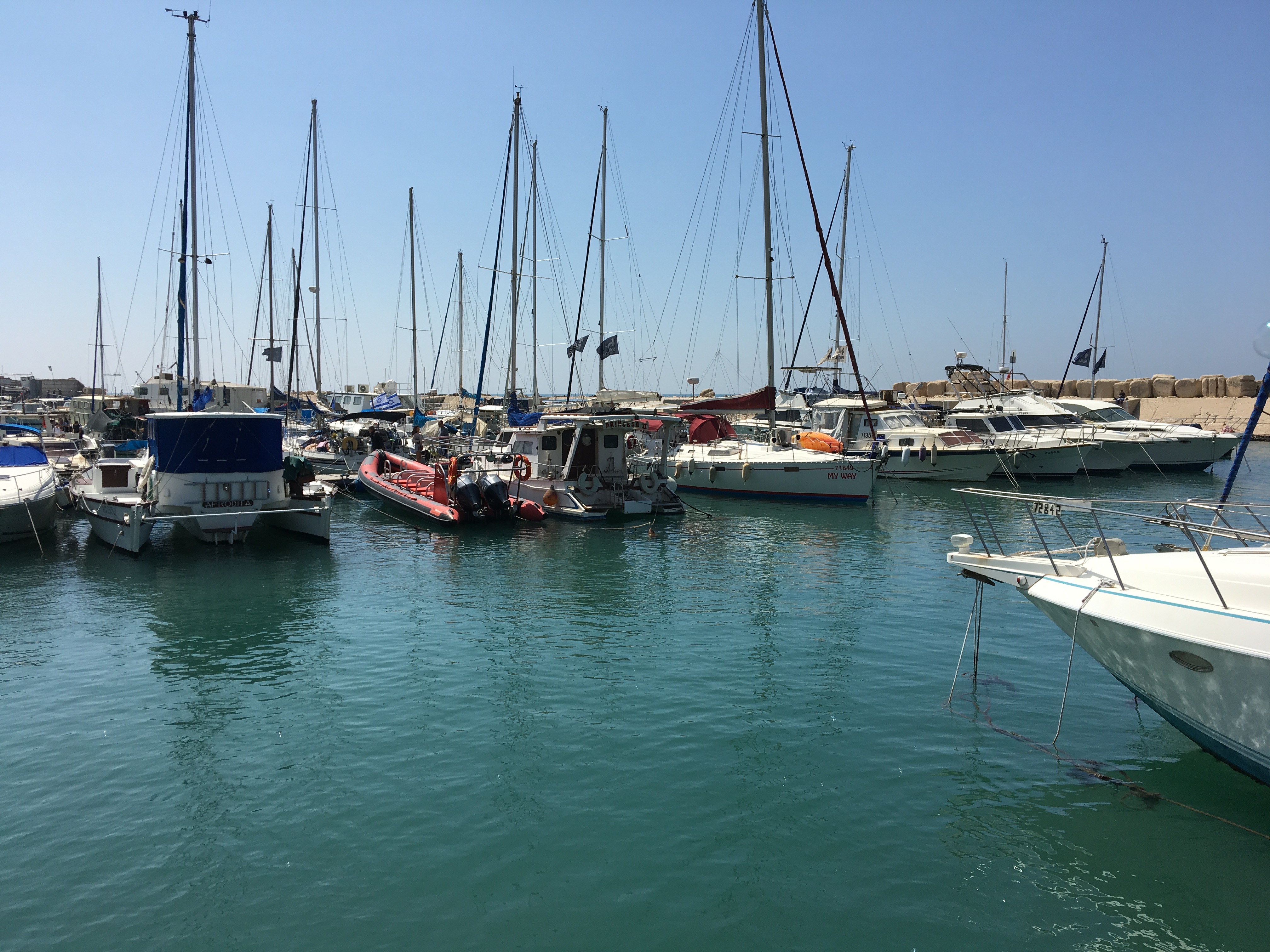 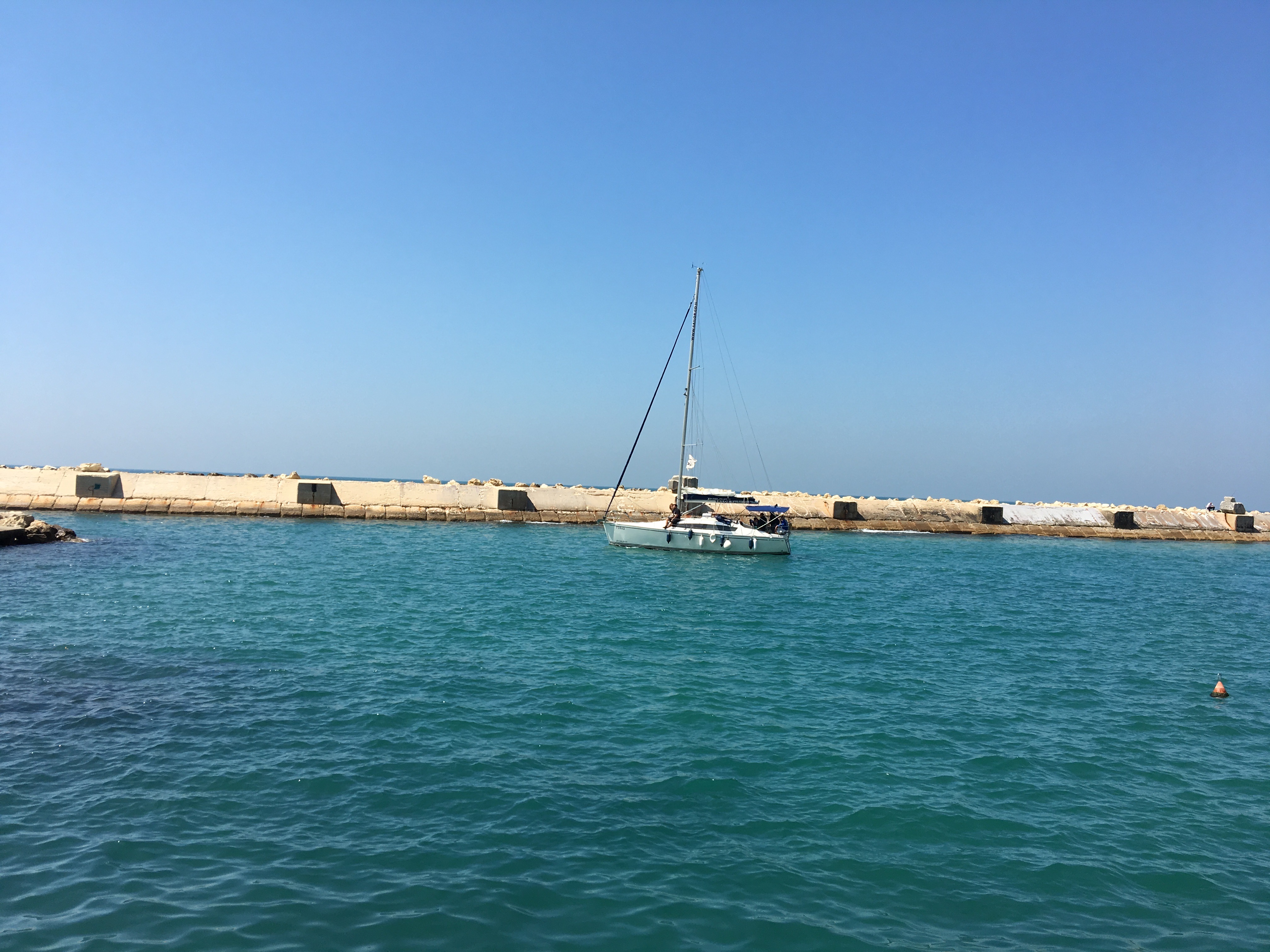 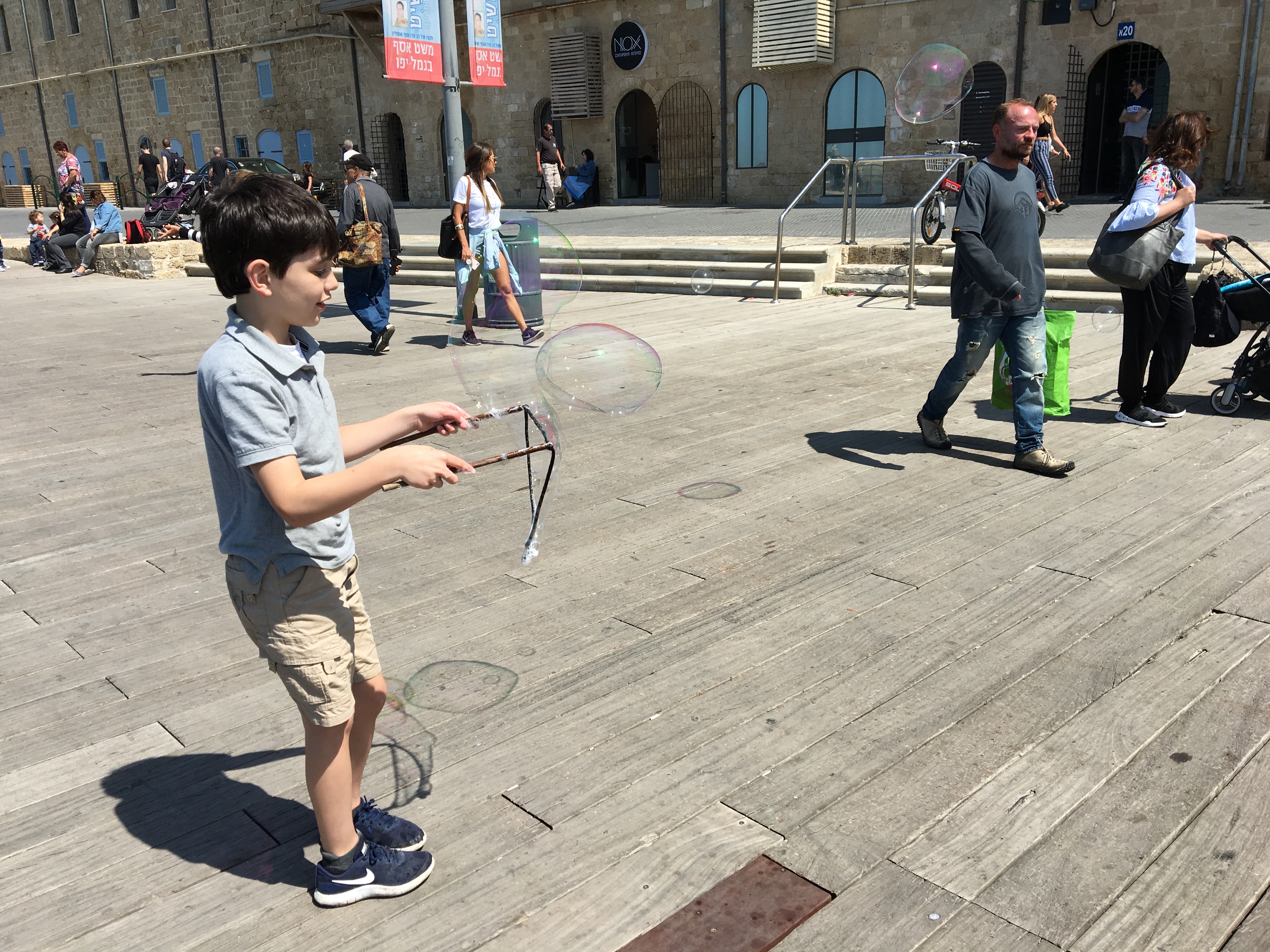 We then retraced our steps walking the three mile beachfront home.

That is our walk home to the furthest point that you can see. 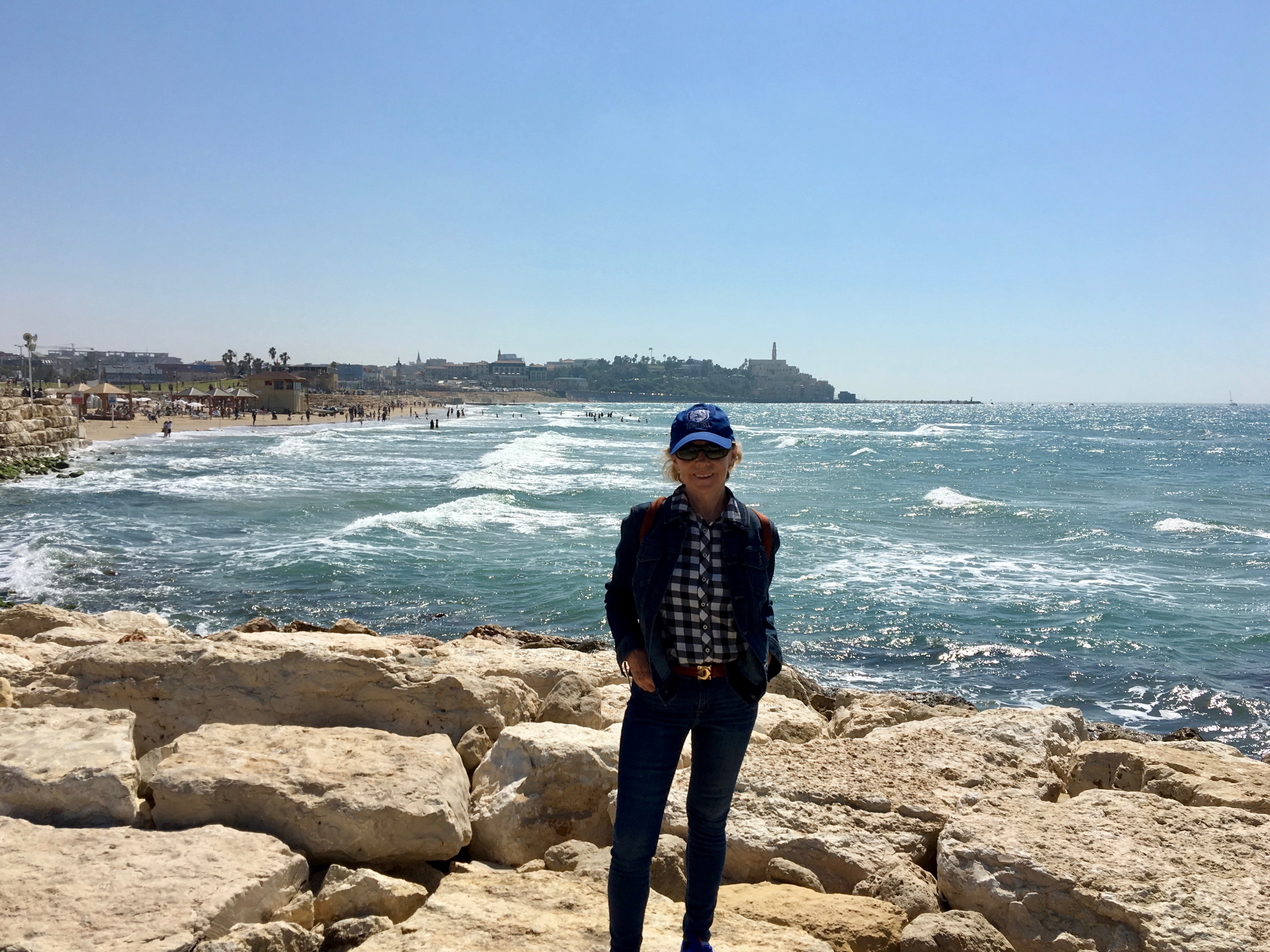 On the way home with Jaffa in the background.

April 1 on the beach in Tel Aviv.