After The Regal Wedding we get the privilege of taking our grandson Jackson back to London for two weeks while his parents honeymoon in Rome, The Amalfi Coast and Santorini.  We left for Logan International Airport an hour before Rob and Jenn but they met up with us in the Norwegian Air Lounge.

We are both flying overnight to London, Rob and Jenn on BA to Heathrow and Jackson, Jim & Sandy on Norwegian to Gatwick.

Monday was a bit of a lost day after the overnight flight even though we all slept for a few hours.

Late afternoon we walked to The Rutland Arms, a pub along the Thames, and introduced Jack to pub food and of course he started with steak and ale pie. 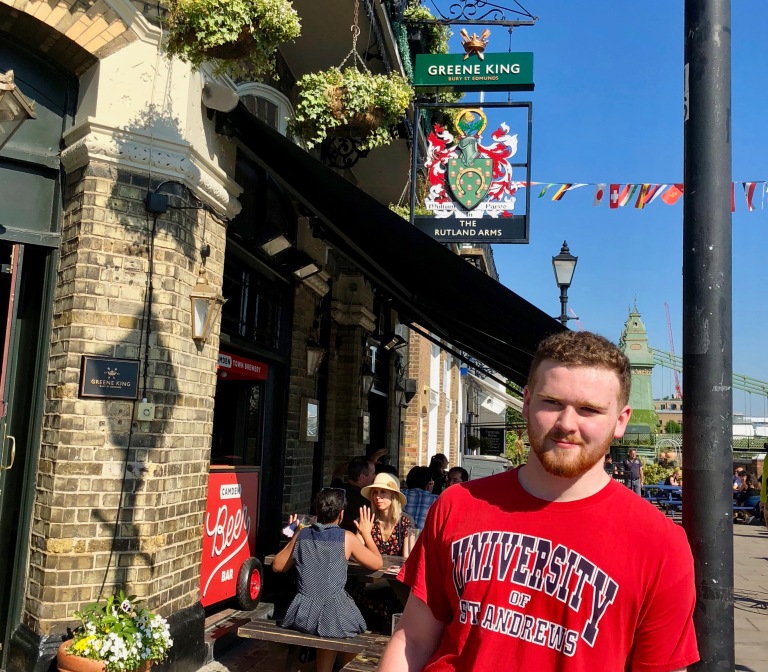 On Tuesday, Jack’s first full day in London we let him sleep and went on our routine 3 mile run along the Thames.  Since we have Jack for almost two full weeks we have decided to be easy on him and not subject him to the 3-4 mile walk into central London so we will be using the tube a lot.  We generally walk wherever we are going and then return on the underground.  Our first tourist stop is the London Eye which we did last June with Jennifer and Rob.

This is the most popular paid tourist attraction in the UK and is the largest ferris wheel in Europe.  We enjoyed great views of the city on a sunny clear day.  After The Eye we walked back across the Westminster Bridge to Westminster Abbey electing not to go in due to the very long queue, instead we had a small lunch at the Westminster Arms Pub. 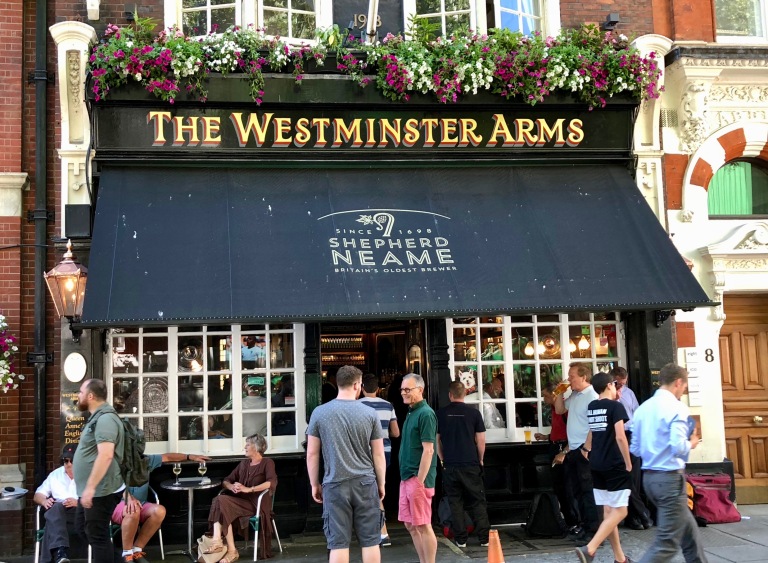 We spent the afternoon wandering through St. James’s Park around Buckingham Palace, through Green Park to Hyde Park.

We purchased tickets online for Westminster Abbey and returned the following day.  Jim and Jack were able to skip all the lines and Jackson took more time looking than we expected, seeming to quite enjoy the history. 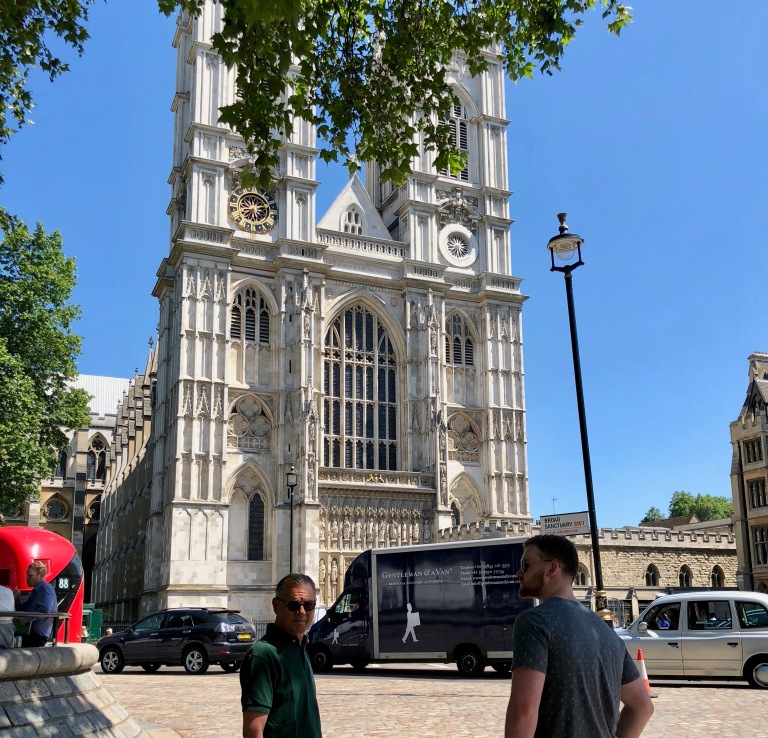 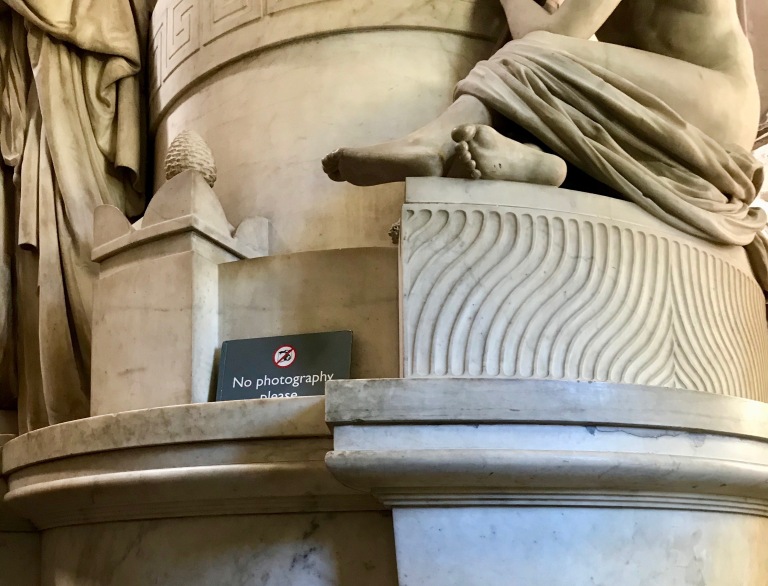 Next up for this day was taking a zip line which had been billed as the world’s longest, fastest city-centre zip wire.  We walked across Westminster Bridge to the relatively small Archbishop’s Park where we found an unimpressive 35 meter high tower with the zip lines running 225 meters.  In spite of its seeming smallness Sandy was terrified and actually shaking at times during our preparation for the experience.

While checking in we met John Keating and his daughter, Lea.  Lea had bought the zip line ride as a Father’s Day gift for her father knowing full well that he was terrified of heights and Lea herself was NOT going on the wire.  John is from Ireland and Lea is working in London.  We had a lot of fun checking in and getting prepared for our experience.

While waiting our turn to climb the tower we met up with two girls who were doing a second jump and they literally talked Sandy onto the ledge by giving her a lot of advice and tips which really calmed her down and allowed her to enjoy the experience.

Actually doing the zip line was quite scary as we had to descend four small steps going literally into space with no hand railings.  There were two minute handles on the cable attachment but they were only large enough to really hook two fingers over.  You don’t have to jump into space but only sit down into your harness and you are off.  Sandy was a real trooper and did it in spite of her terror.  She had perfect form on the slide down with legs extended and facing forward the whole time.

Jim took a video of our friend John going off but when we finished our ride, he and Lea had already vacated the premises.

On leaving the Park we stopped off at the first pub we came across and who should we find inside but John and Lea.  We spent over an hour with them sharing pints and experiences.

Turns out that John absolutely abhorred his zip line experience rating it a -6/10.  He had almost flipped upside down at the end of the ride when it suddenly stopped causing him to hit his head on the harness and stunning him for at least 5-10 minutes.  We exchanged pictures, videos and contact information meeting up with them again at another pub later in the week to watch the World Cup match of England vs. Belgium.  The pubs are absolutely chock-a-block with people for these matches and we had a great time with John, Lea and her work mates.

On leaving the pub after the zip line we walked to the nearby Imperial War Museum-London, Southwark which we all enjoyed a brief walk through.

The Imperial War Museum was intended to record the civil and military war effort and sacrifice of Britain and its Empire in WWI but has since expanded to include all conflicts in which British or Commonwealth forces have been involved since 1914.  It now has five branches in England, three of which are in London.  Churchill’s War Rooms are part of it.  We did take Jack to the Churchill War rooms a few days later.  It is absolutely packed with both Churchill and WWII memorabilia and information.

Jack has watched both of Kingsman: The Secret Service movies and was interested in seeing The Huntsman tailor shop on Savile Row and the Black Prince Pub where a fight scene was filmed.  We accomplished both on the same day, planning to eat at the Black Prince but we were there between kitchen open times and had to settle for drinking only.

One of our best days with Jack was taking the train to Cambridge and hiring a boat enabling Jack to punt us up and down the river enjoying the backs of a few of the 33 colleges there.

We were hoping to enroll Jack in the world renowned University of Cambridge, but he was not interested in even looking at it.  Another fun day was going to St. Paul’s Cathedral and climbing all of the stairs to the different level viewing galleries.  The views of the inner cathedral below and the city of London outside were well worth the climb. 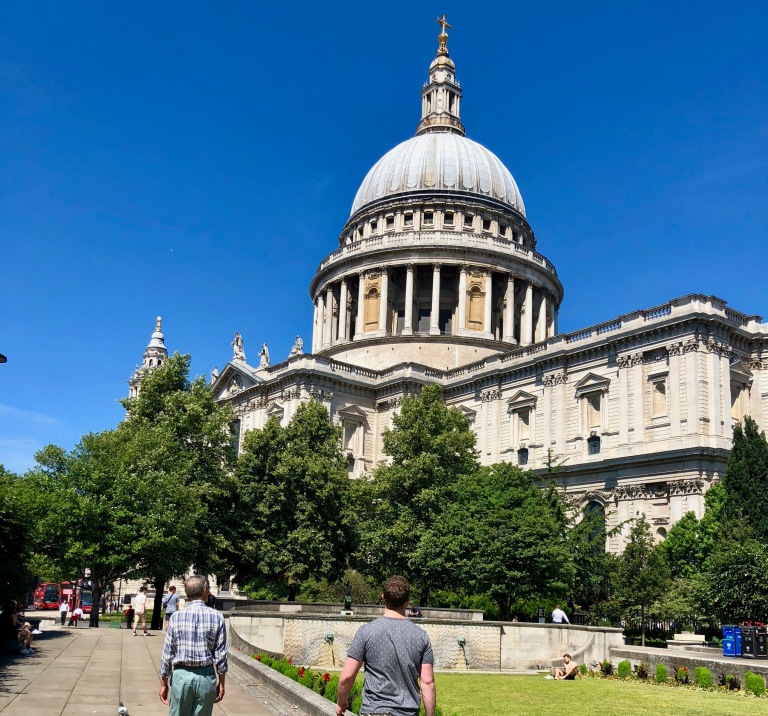 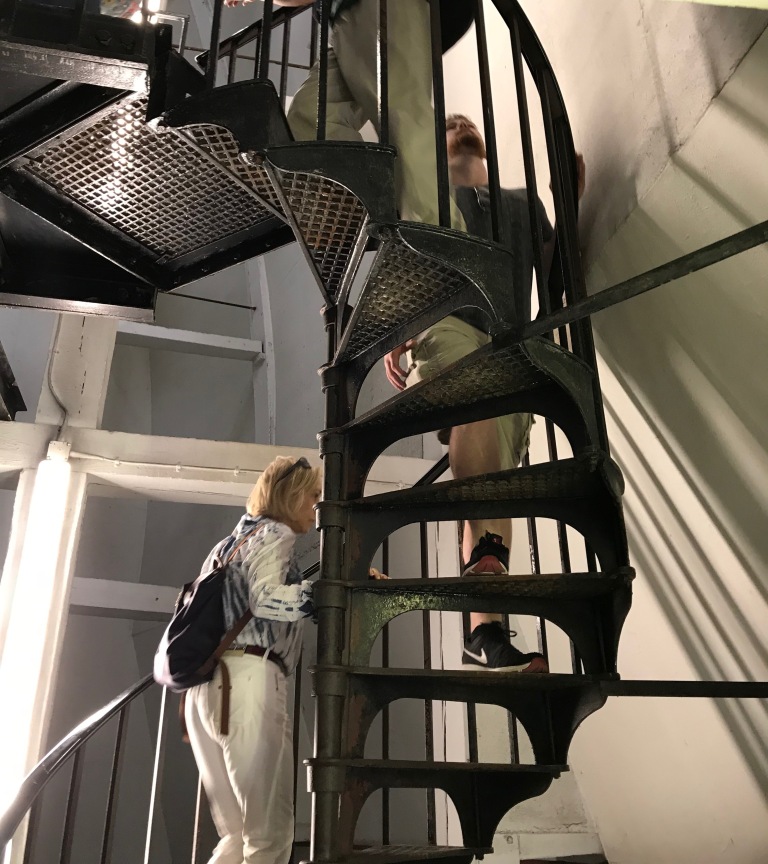 We also visited Borough Market where Jack had two different meals.  Jim & Sandy had Boston Sausage sandwiches and Green Thai Curry which we ate on a bench sipping local IPA’s.

After Burrough Market we took a trip down the Thames on The Thames Rocket which is a rigid inflatable boat that gives you a fast thrilling ride from The London Eye down to Canary Wharf and back again.  We all enjoyed our time on the river as London Weather has been uncharacteristically hot and dry.

Another day Jim took Jack to the Tower of London which was a bit of a bust as there were hordes of tourists and the queues for the Crown Jewels was horrendously long.

Sandy then took Jack up to the top of the Tower Bridge to watch the bridge being raised and lowered for a tall ship.  Jack was completely underwhelmed.

After the bridge raising we had drinks under the bridge and watched it go through its opening and closing cycle from below. 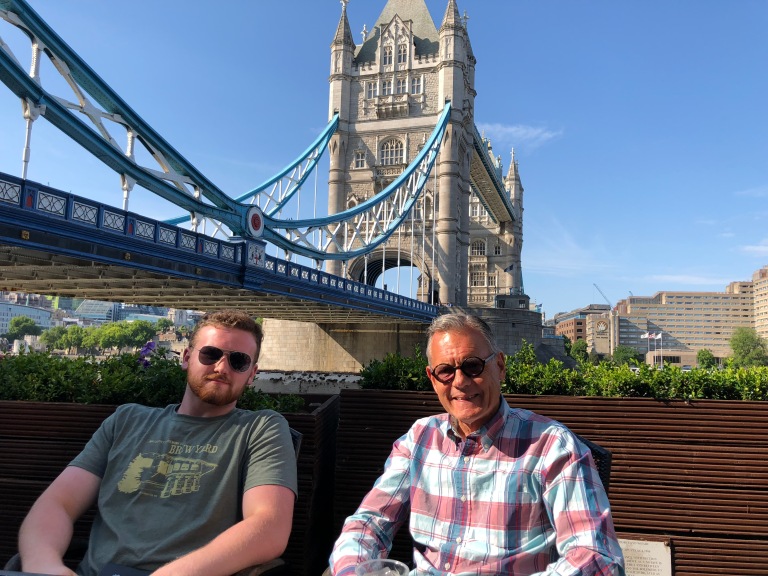 We then  explored a new area for us, St. Katherine’s Docks, which was transformed beginning in 1968 with the building of a hotel, apartments and a marina.

We did have a memorable Indian meal here at Mala.  For the Fourth of July we had been invited to the home of Sigi Mueller and Paul Greenop who we met through our Boston neighbor, Peggy Scott, with an email introduction back on June 2 when we ran a 5K in Richmond Park. (Blog about that is still in draft form)  We took the underground to Richmond, one of the ends of our local District Line and walked about ten minutes to their home where we enjoyed an amazing home cooked meal by Sigi who is a part time nurse, BA flight attendant, chef and ongoing student.  Sigi, who is German, served us a red, white and blue appetizer of Stilton Cheese and roasted red peppers on rye breads.  His desert featured the stars and stripes utilizing blueberries and strawberries.  We spent four hours with them and had an amazing day celebrating the USA’s independence from the UK. 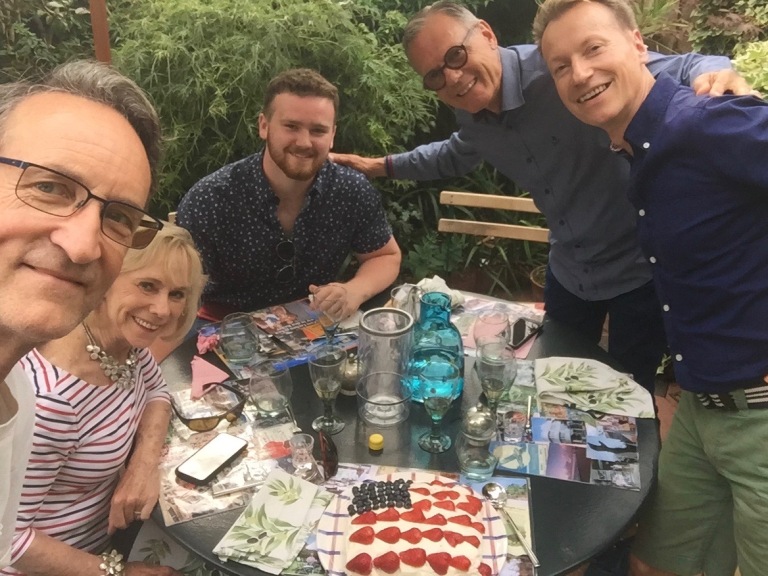 We did give Jack a few down days when he just stayed home and rested, hanging out in his room on his device.  He met up with an online friend that he had never met face to face.  He had pre-agreed to go out with us and other friends to a high end restaurant with a view, the Duck and Waffle.  It was a very disappointing night with poor service and food.  Jim was the only one who actually ordered the duck and waffle.

On Jack’s final full day in London Sandy went to Wimbledon with friends from New Zealand and England.  Jim & Jack went to Greenwich and visited the Royal Observatory where they saw the Greenwich Meridian which divides the eastern and western hemispheres of the Earth, just as the Equator divides the northern and southern hemispheres.  His last meal here with us was a full English breakfast at a local cafe.

We did not accompany Jack to the airport as England was playing Sweden in the world cup at 3, opting to send him instead with a local car company.  As stated in the beginning of this long blog, we feel so privileged to be able to spend such quality time with our oldest grandchild.  It isn’t always easy for him hanging out with elderly grandparents and their friends  but he is always a good sport.  He has been traveling with us for 10 years now and we have shown him New York City, Washington DC, Arizona & the Grand Canyon, Paris and now London.

7 Replies to “Two weeks in London with Jack or Jack’s Honeymoon.”