We have two weeks in Asheville to spend time with family and friends.  Saturday morning September 5 Jim returns our rental car to the Asheville airport and takes a taxi home.  We will be using the MacAlpines Toyota Camry which has 158,000 miles on it.  We are so appreciative of their generosity in allowing us a two week stay in their guest suite and unlimited use of their home and auto.  We spend Saturday and Sunday with son Geoffrey and brother Philip’s family in Madison County.  It is so rewarding to watch all of the cousins interacting and playing together.  Jim’s brother David drove 3.5 hours from Silver Point Tennessee and joined us on Sunday with his wife Lynn.

Jim holding Gaorii, also called Gigi or just “baby”, Bhavanii at his side and Freya in front. They call this a zipper spider because of its distinctive zig-zag in the web. There are so many of these on Geoff and Sofi’s land.

Philip and Phyllis’s home which Philip built himself many years ago. There are creeks running by on both sides.

Such an idyllic spot. 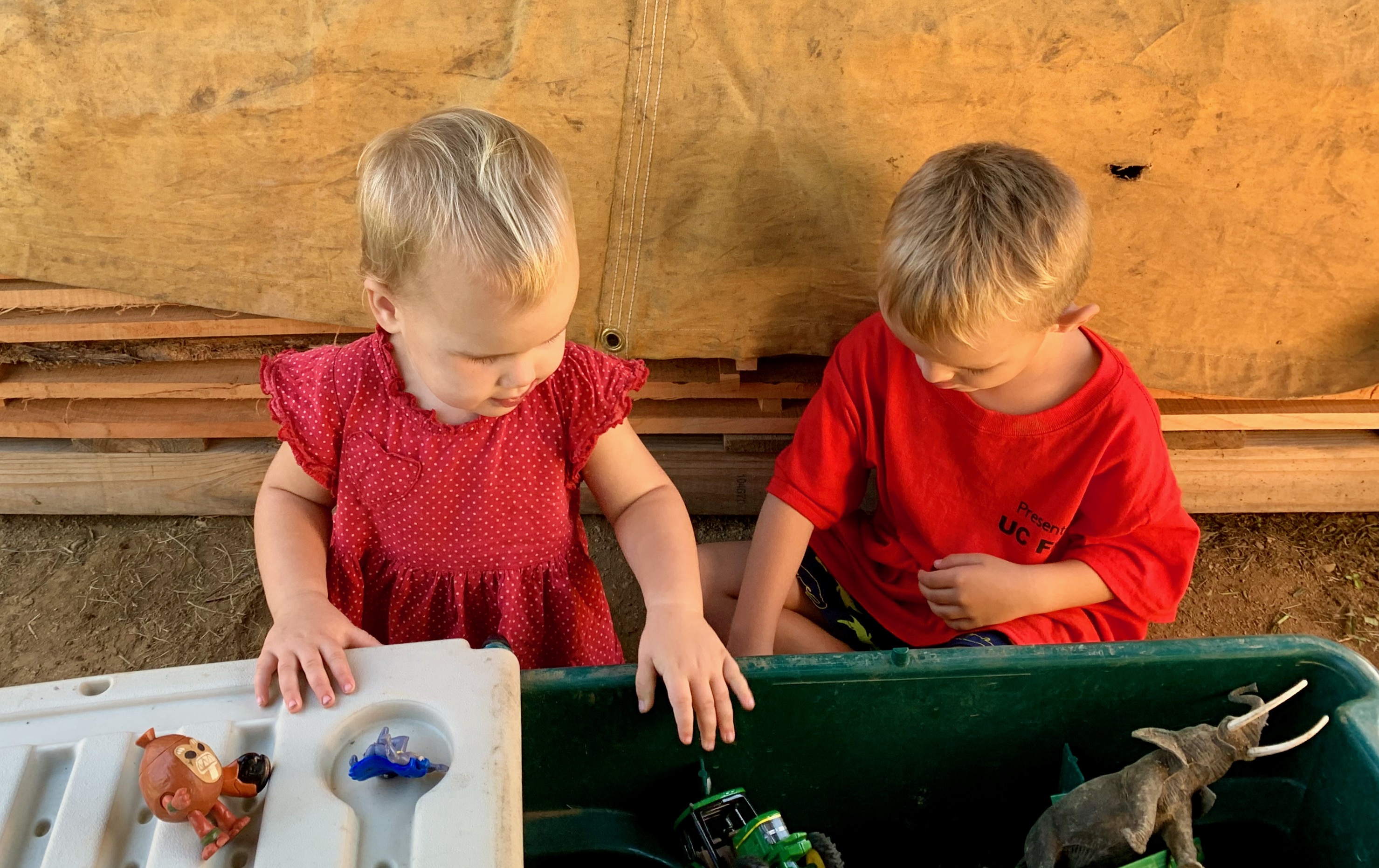 Kid’s table inside, adults are on the back porch although the pictures appear vice versa. 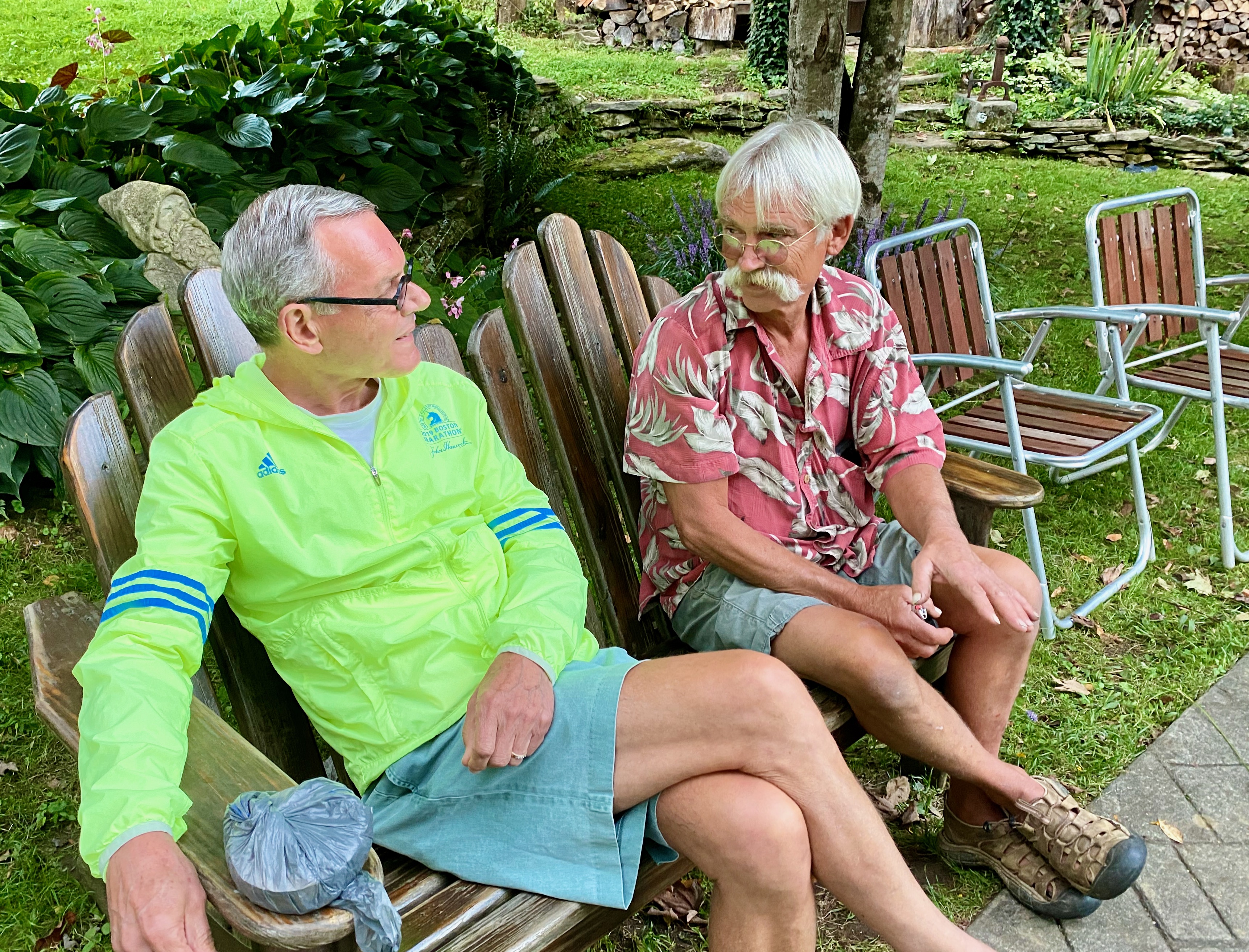 Brothers again with David in the middle.

Running is very problematic for us in Asheville as the roads are so narrow and there are so many hills.  We have found that we are forced to drive to specific locations where we can avoid the narrow roads but not the hills. 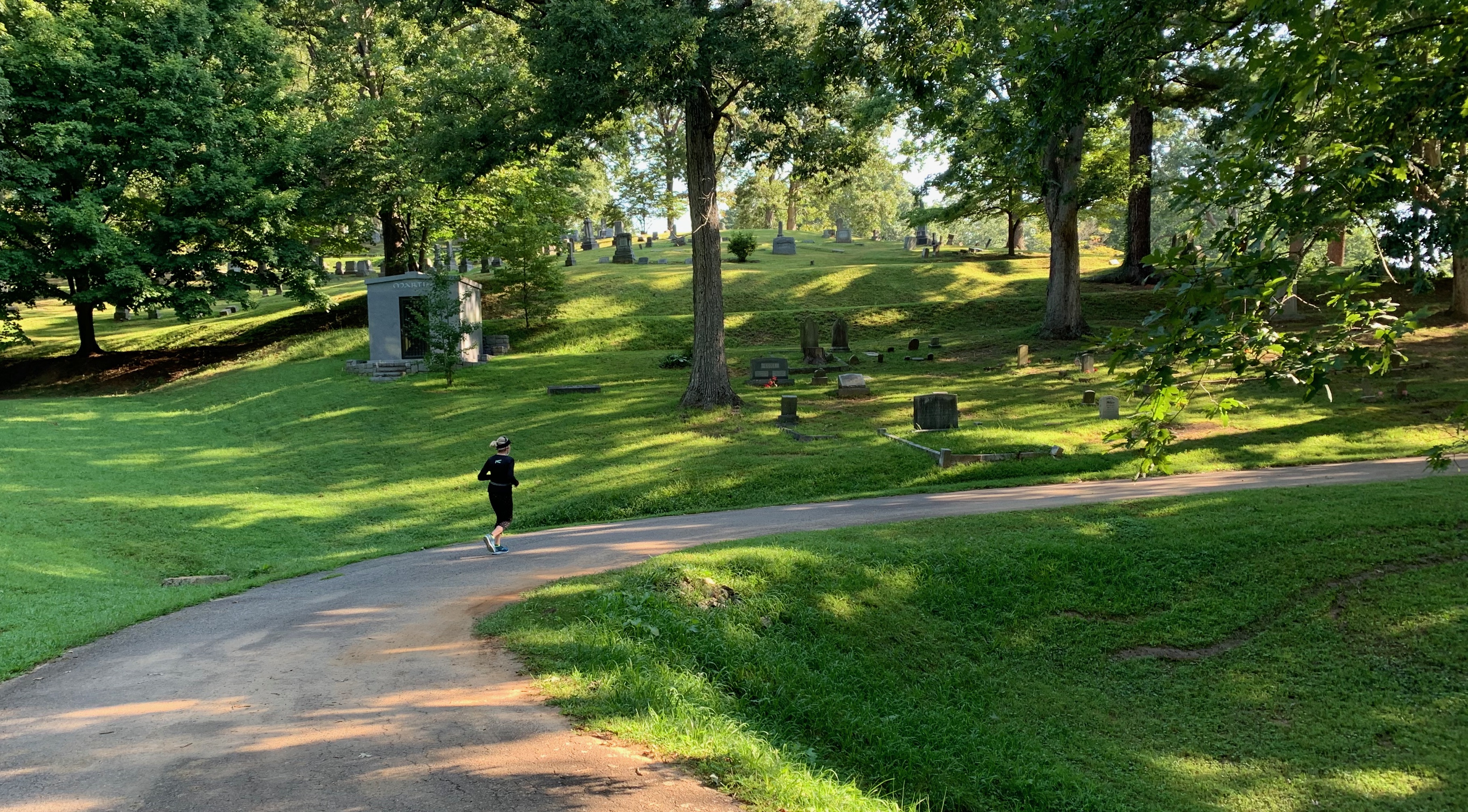 Riverside Cemetery in the Montford section of Asheville ended up being our favorite running venue, scenic, mostly shady and rolling hills. 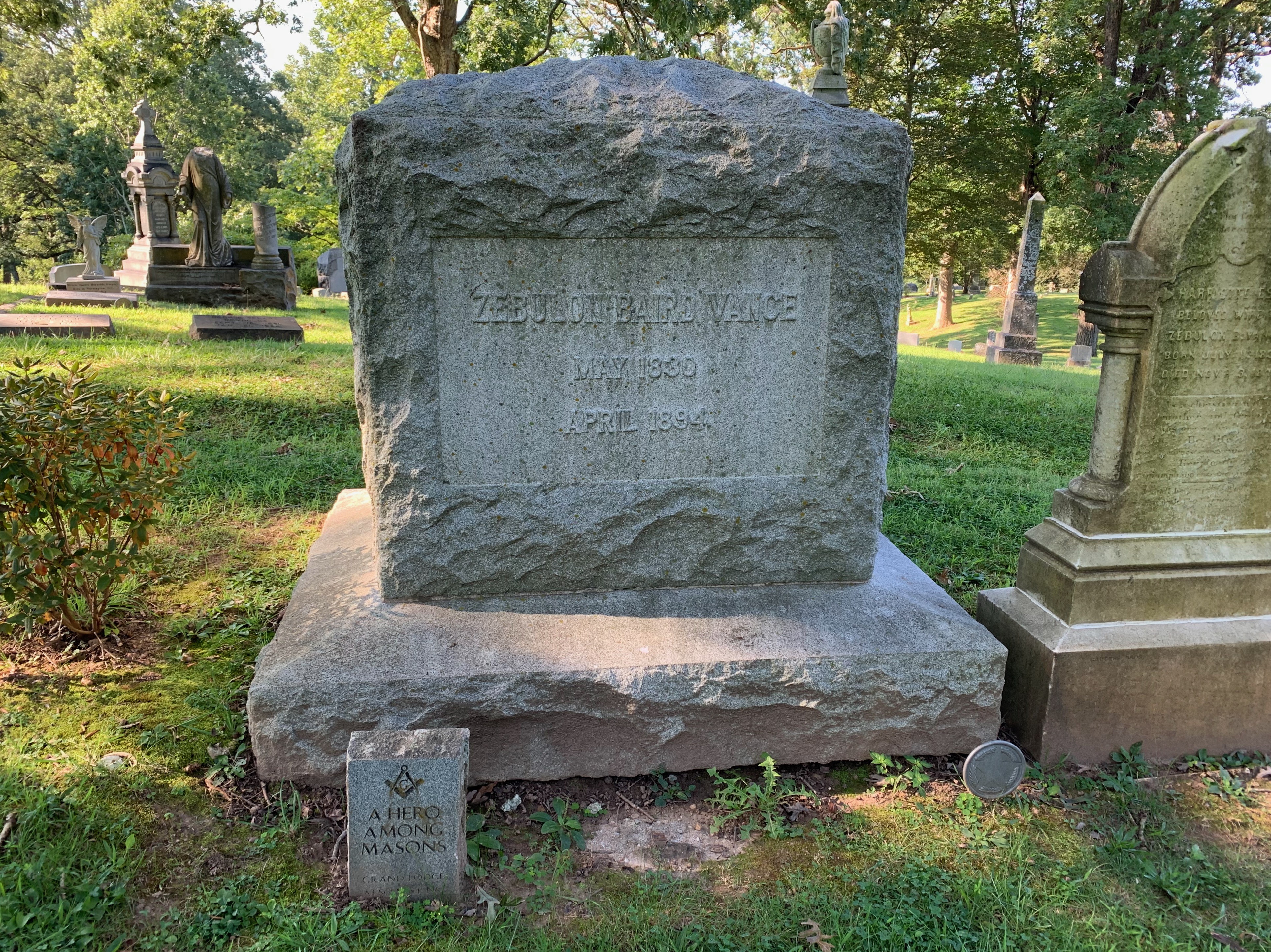 Jim came across these headstones of the parents and brother of a college friend, Robert Brannan. 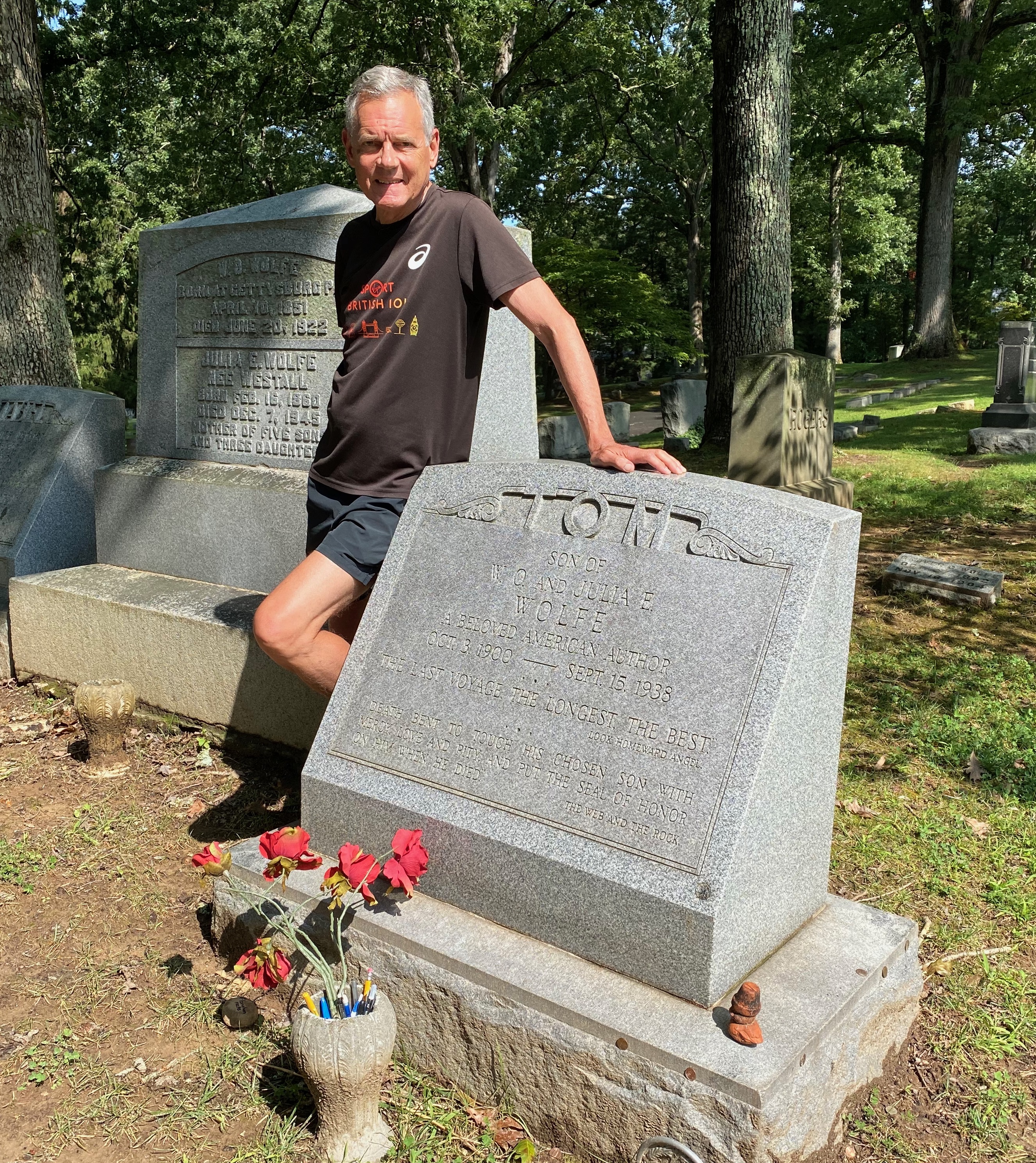 Art in downtown Asheville, stairs from Wall Street up to Battery Park Avenue.

Hard to read but it says “Asheville loves you too.

David, Philip and Jim in Philip’s for a final meal Labor Day evening.

We spent most of our first week in Asheville hanging out with Bob and Gail at their home in Candler.  A high school, college and medical school classmate of Jim and Bob’s, Bill Boyle, was also staying at MacAlpines with his wife Karen.  Bill is retired and living in the mountains of Colorado.  They were in Asheville visiting Karen’s parents.  We met up with Geoff and family as much as possible and also got together with our close friends Jill and David Merrell who have a dental practice in Weaverville.  Jill is Gail and Bob’s daughter.  We became close to these two while they were in Dental School at Tufts University in Boston.

We took a hike in the North Carolina Arboretum with Bill Boyle, Gail and Bob.

Dinner with the Merrell’s and MacAlpine’s at Forestry Camp Bar and Restaurant. 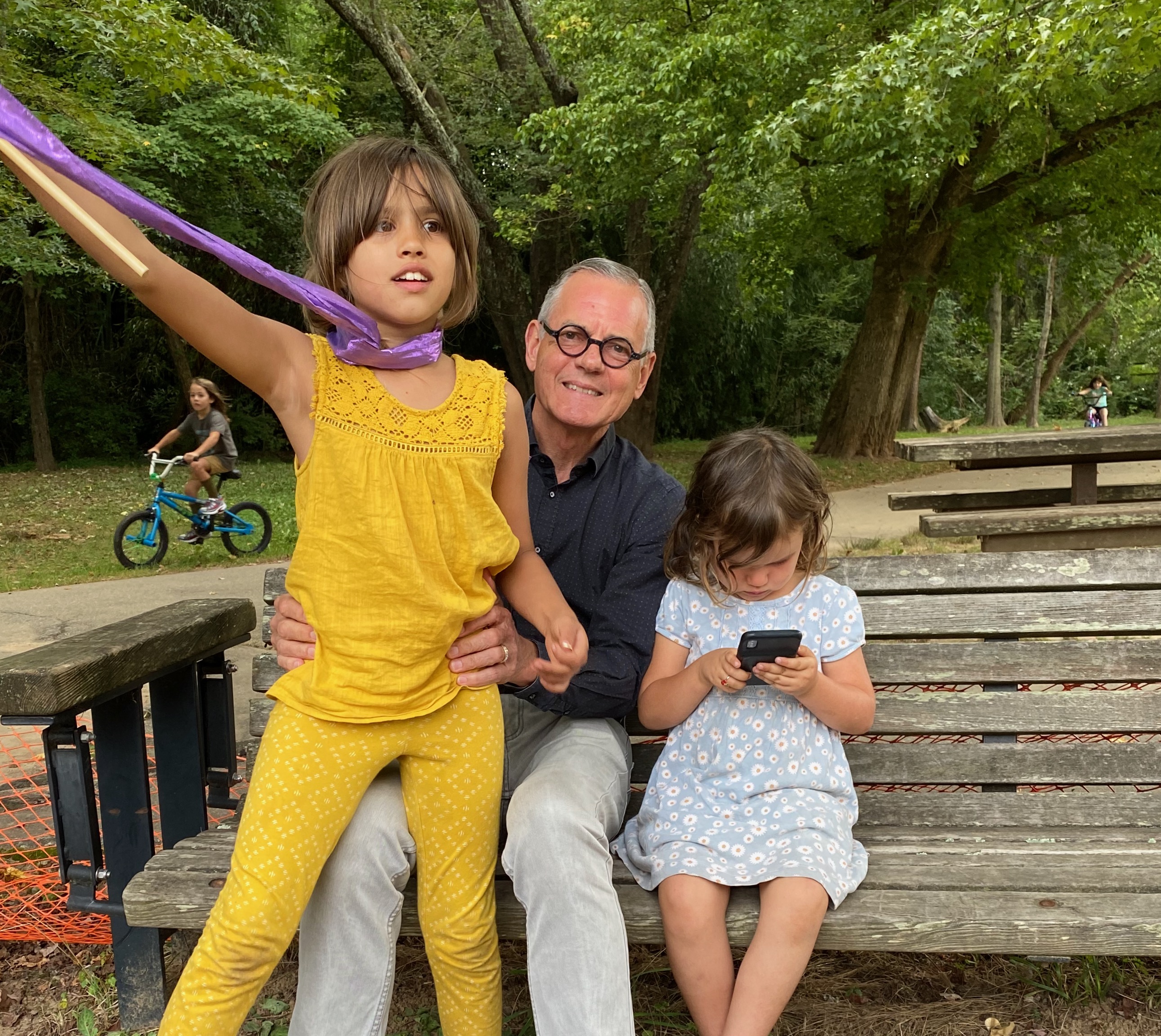 Evelyn and Mitch, David and Jill’s offspring and exceptional young adults. We had dinner with them at The Country Club of Asheville.

Another run in Riverside Cemetery where we found the grave of William Sydney Porter AKA O’Henry. Sandy placing a penny on O’Henry’s grave. His best known work is Gift of the Magi which has references to pennies.

Trying on shoes at Tops For Shoes, a large independently owned and family run store for three generations. Jim shopped here as a kid and it is now one of Sandy’s favorite shoe stores.

Dinner at Tupelo Honey with Geoff and family.

Great fun being a grandfather.

We drove to Greenville South Carolina to see our friends Mary Jane and Rick Jacques.  Jim went to high school with Mary Jane’s brothers Paul and Johnny.  We have become close to Mary Jane and Rick through the Boston Marathon. Rick has run Boston 25 times, the last one being virtual the weekend prior to our visit.  17 of his Boston Marathons have been consecutive.  While Rick runs and rests, Mary Jane explores Boston when there.  She has taken numerous pictures of our Marathon flower boxes before she ever knew that we lived there.  We just happened to connect through a mutual friend who lives near us in Boston and Rick and Mary Jane have been attending our Marathon parties ever since.

Sandy has been putting flowers in running shoes for about 30 years. 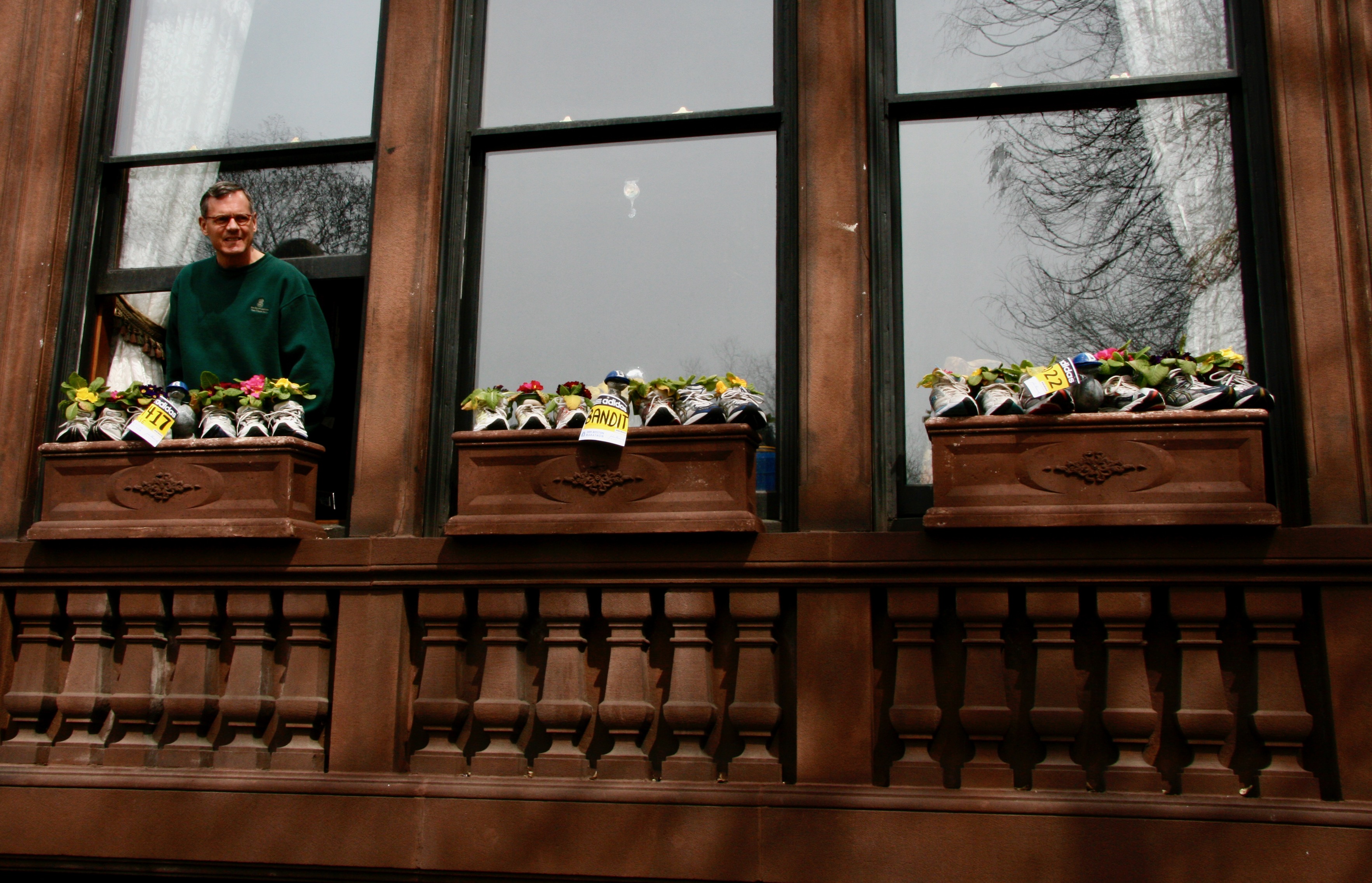 Our typical Marathon Party with 26.2 balloons hanging from the ceiling.

Rick & Mary Jane in front of their house in Greenville SC.

They provided us a very tasty lunch. 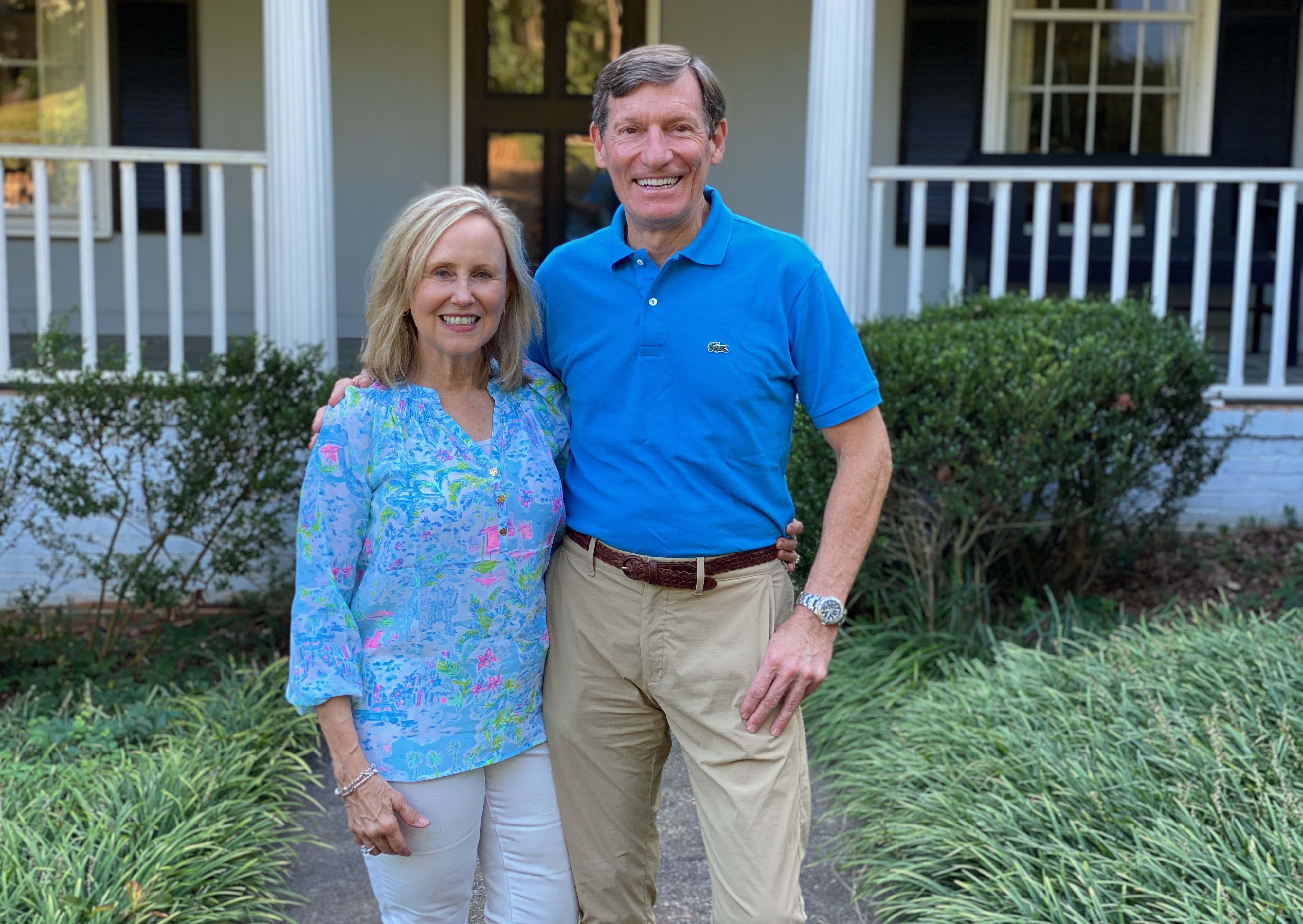 After lunch we took a walk in downtown Greenville. This is the Liberty Bridge at Falls Park built in 2004. 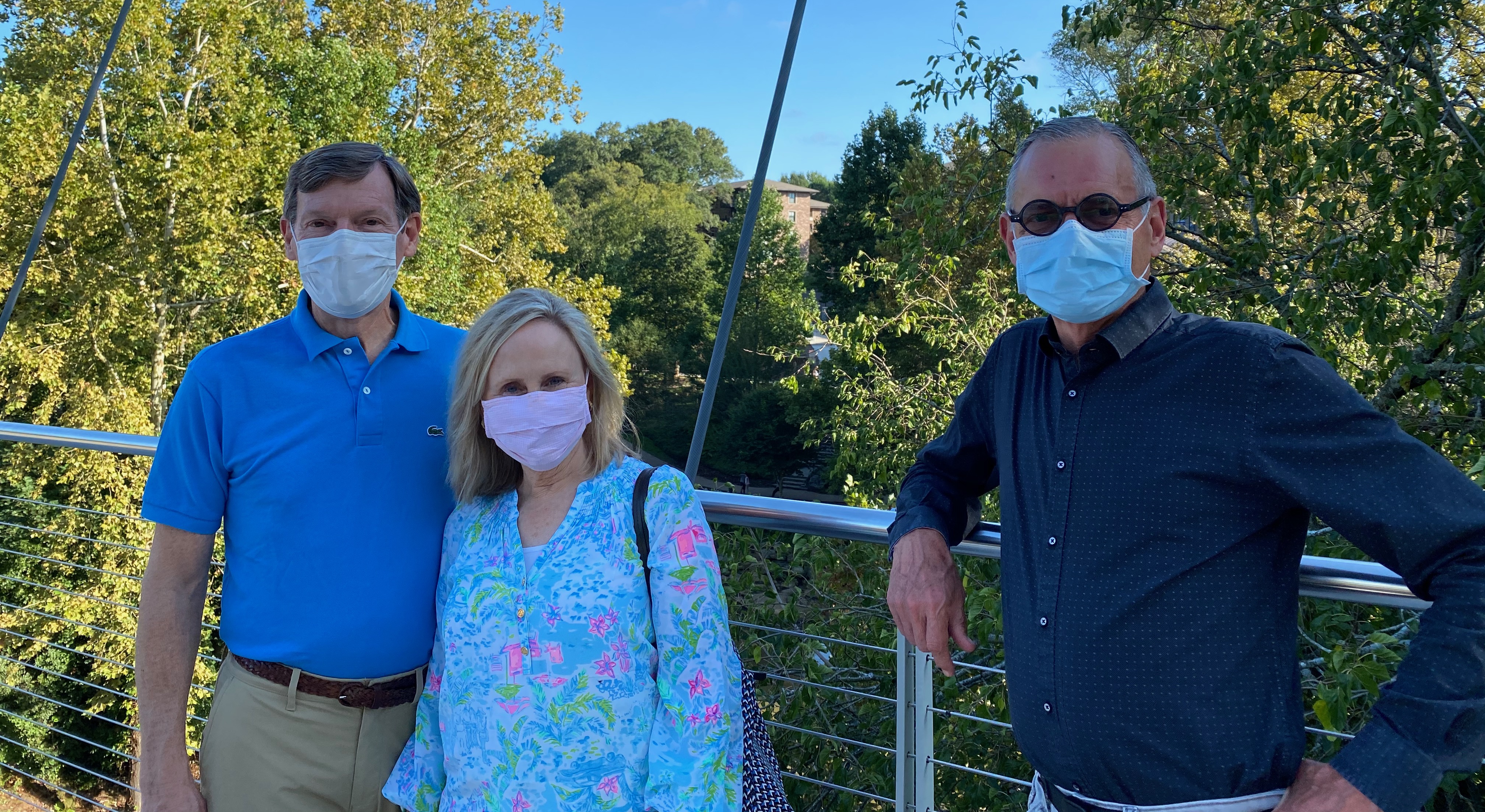 This is a very lightweight bridge designed to look as if it is floating in air.

We had the privilege of visiting with Mary Jane’s brothers John, far left and Paul, next to Sandy.  Jim hasn’t seen them since high school.

John Gilbert’s home built in 1990 has the stately feel of an old European home.

We had a really lovely day with Mary Jane and Rick.  Thank you so much for your Southern Hospitality.

We took a couple of runs along the dirty French Broad River. Quite flat but not as interesting as the cemetery.

We took a day trip by ourselves to the top of Mt. Mitchell which is the highest peak east of the Rocky Mountains.

It was a cloudy misty day and this was our view from the summit.

We did have some brief views of the mountains.

Dinner at the MacAlpine’s with the Merrell’s in attendance also.

Another day trip to Black Mountain, Swannanoa and Montreat. 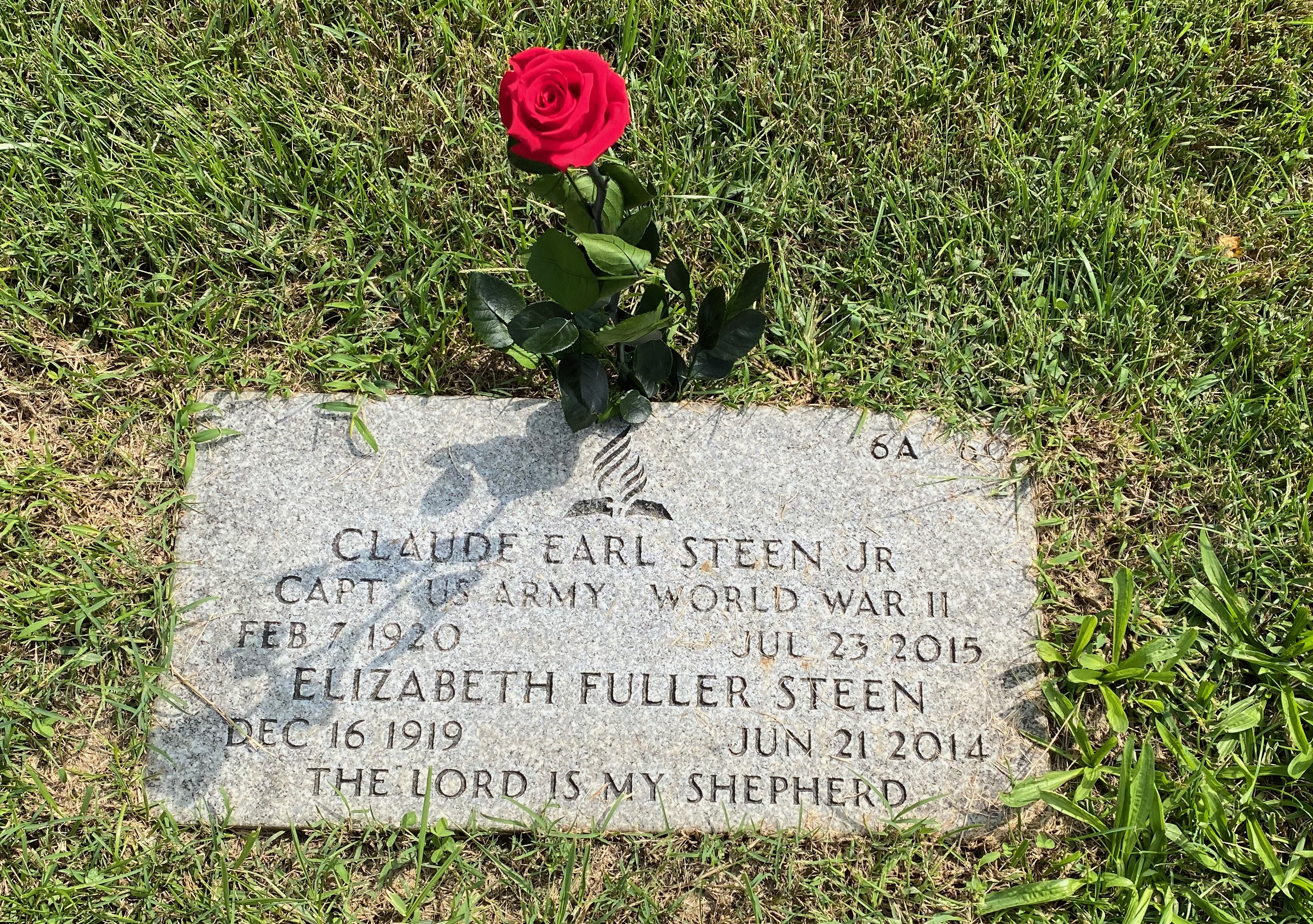 We visited the burial site of Jim’s parents, Claude and Elizabeth who passed in 2014 and 2015. 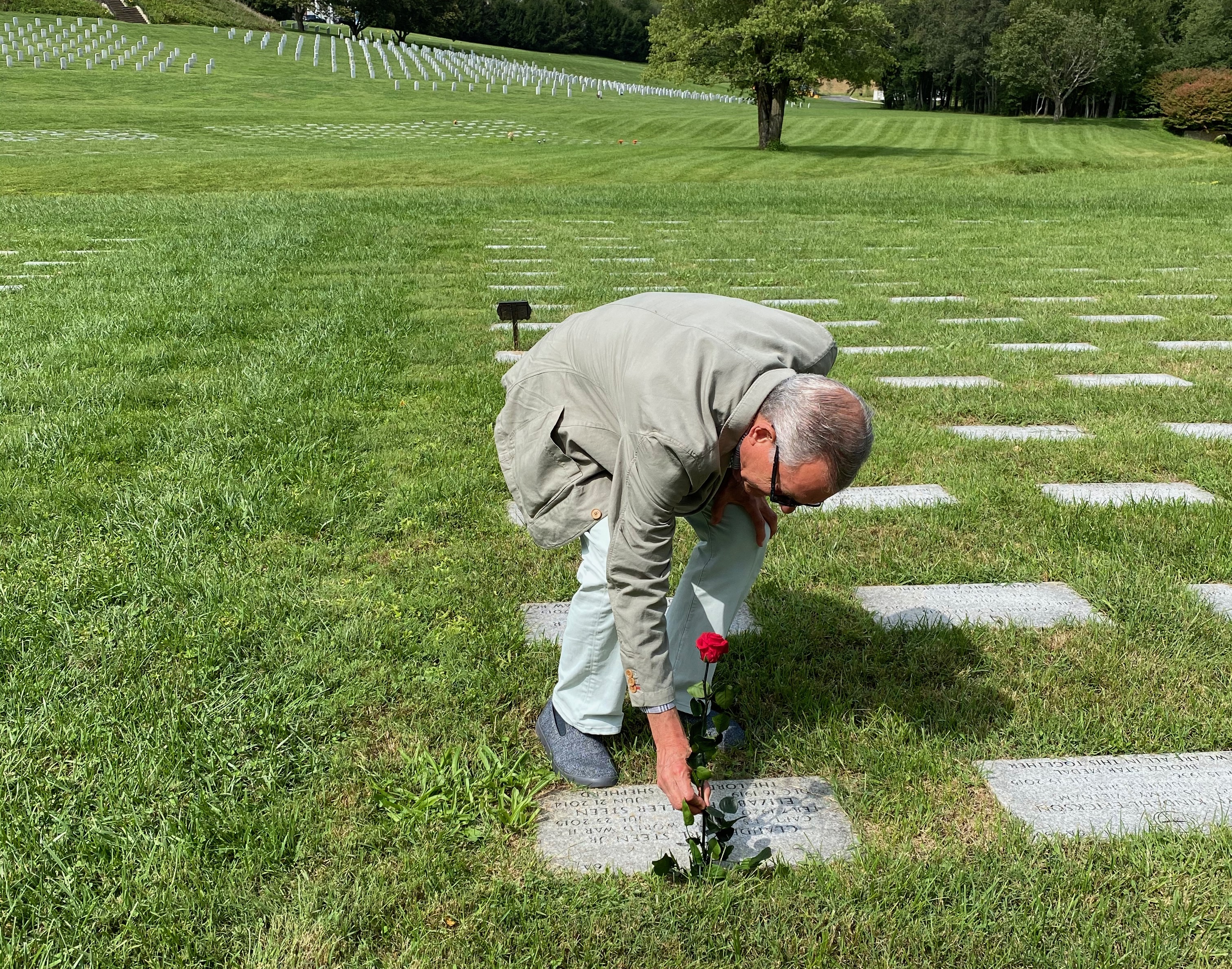 Sandy bought a preserved rose for the grave marker.

Quite emotional for us to visit Western Carolina State Veteran’s Cemetery in Black Mountain.

Our last big outing with the MacAlpine’s was a drive through Brevard to Lake Toxaway, Cashiers, Highlands, Dry Falls, Sylva and back home. 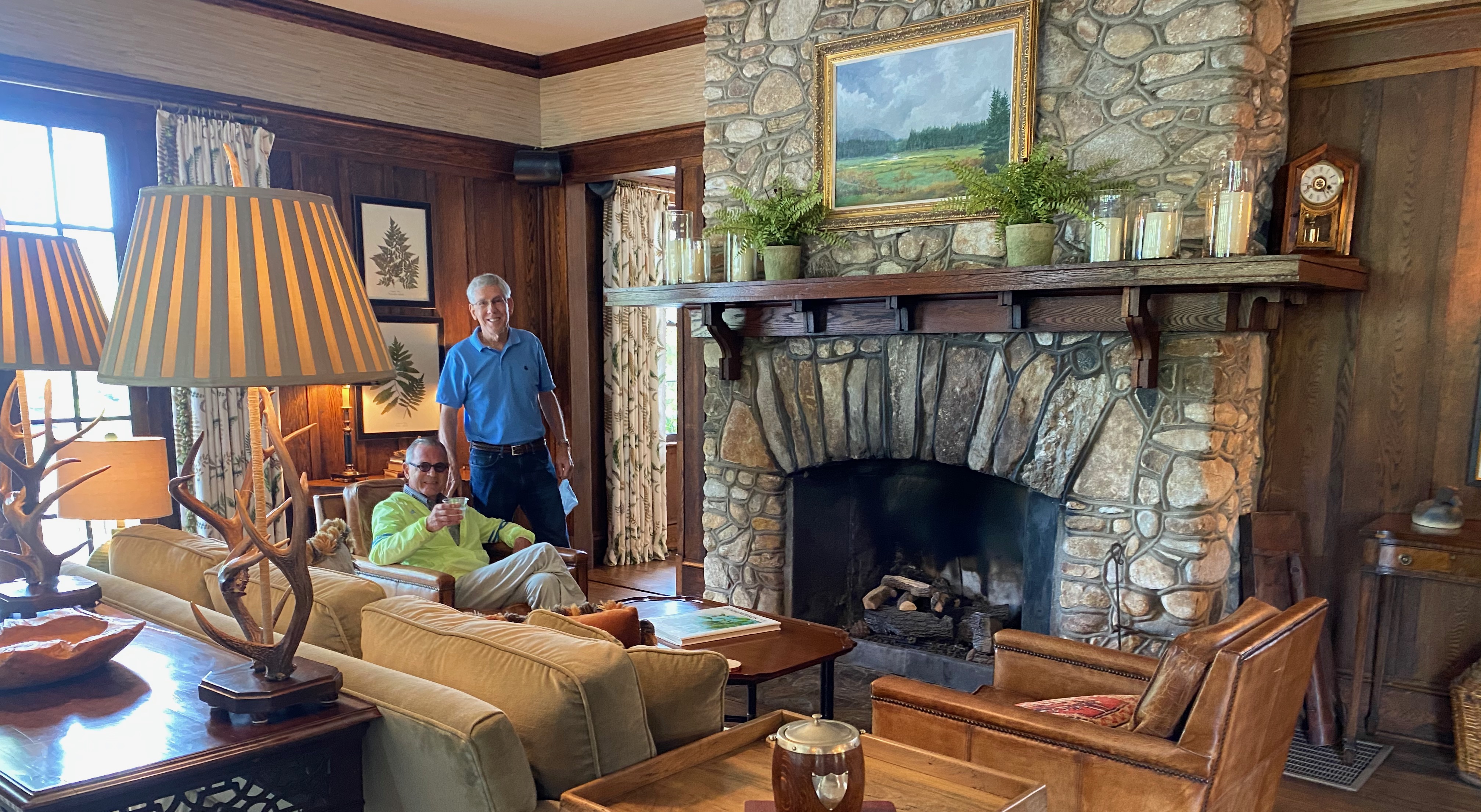 The Greystone Inn on Lake Toxaway, an elegant old mansion with beautiful views of the lake. 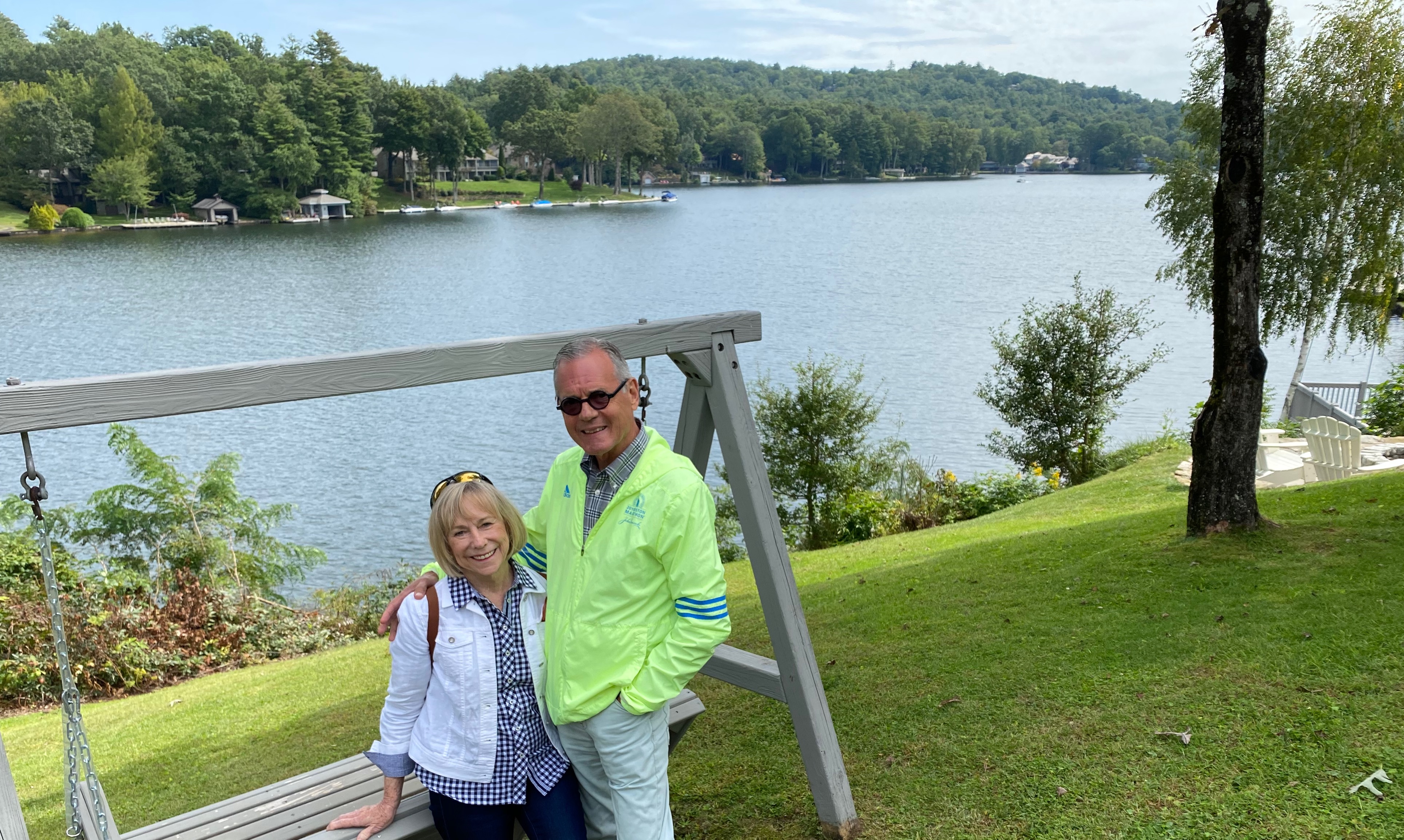 Lake Toxaway is a beautiful meandering mountain lake surrounded by fancy estates. It is manmade and is the largest privately held lake in North Carolina. 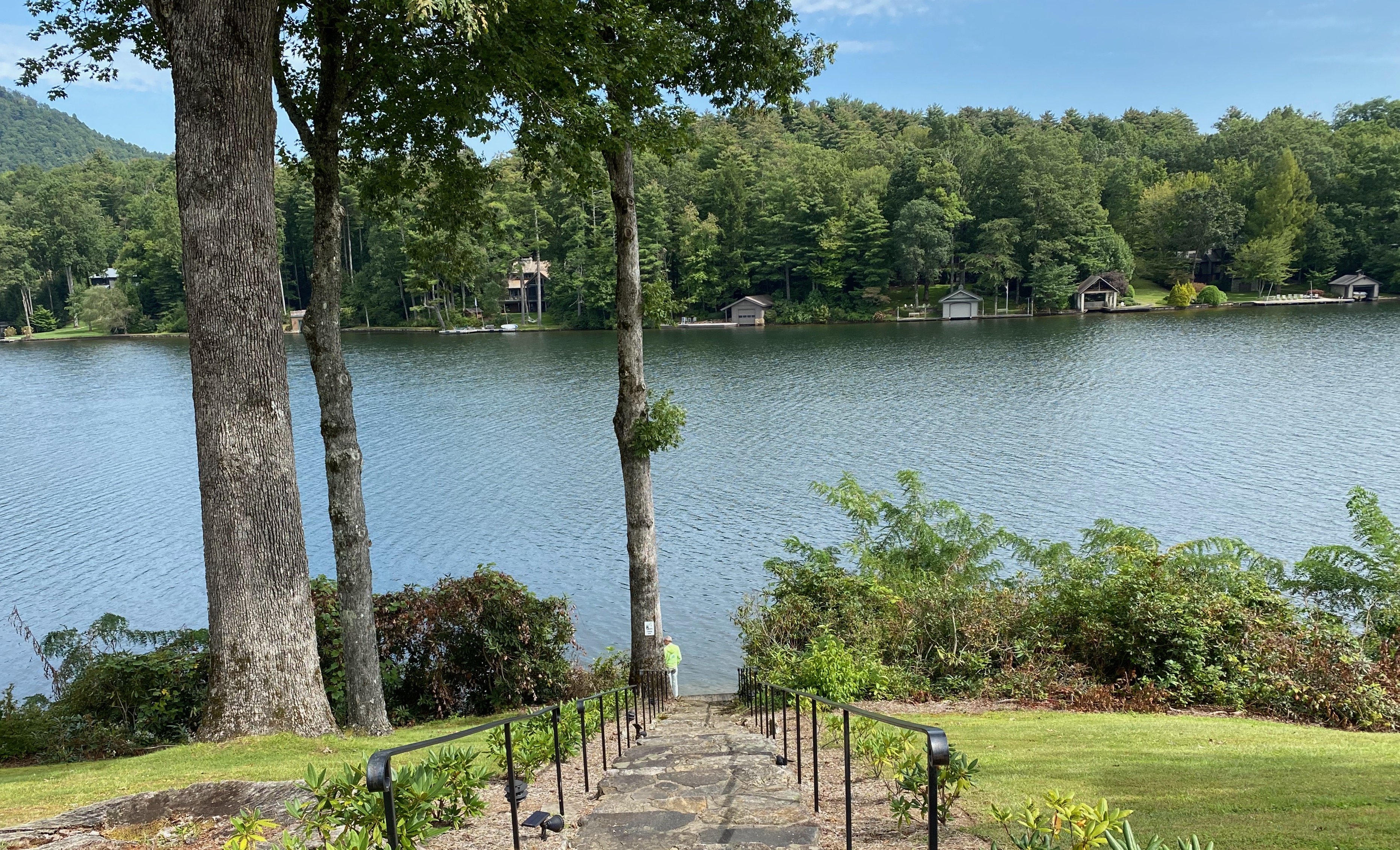 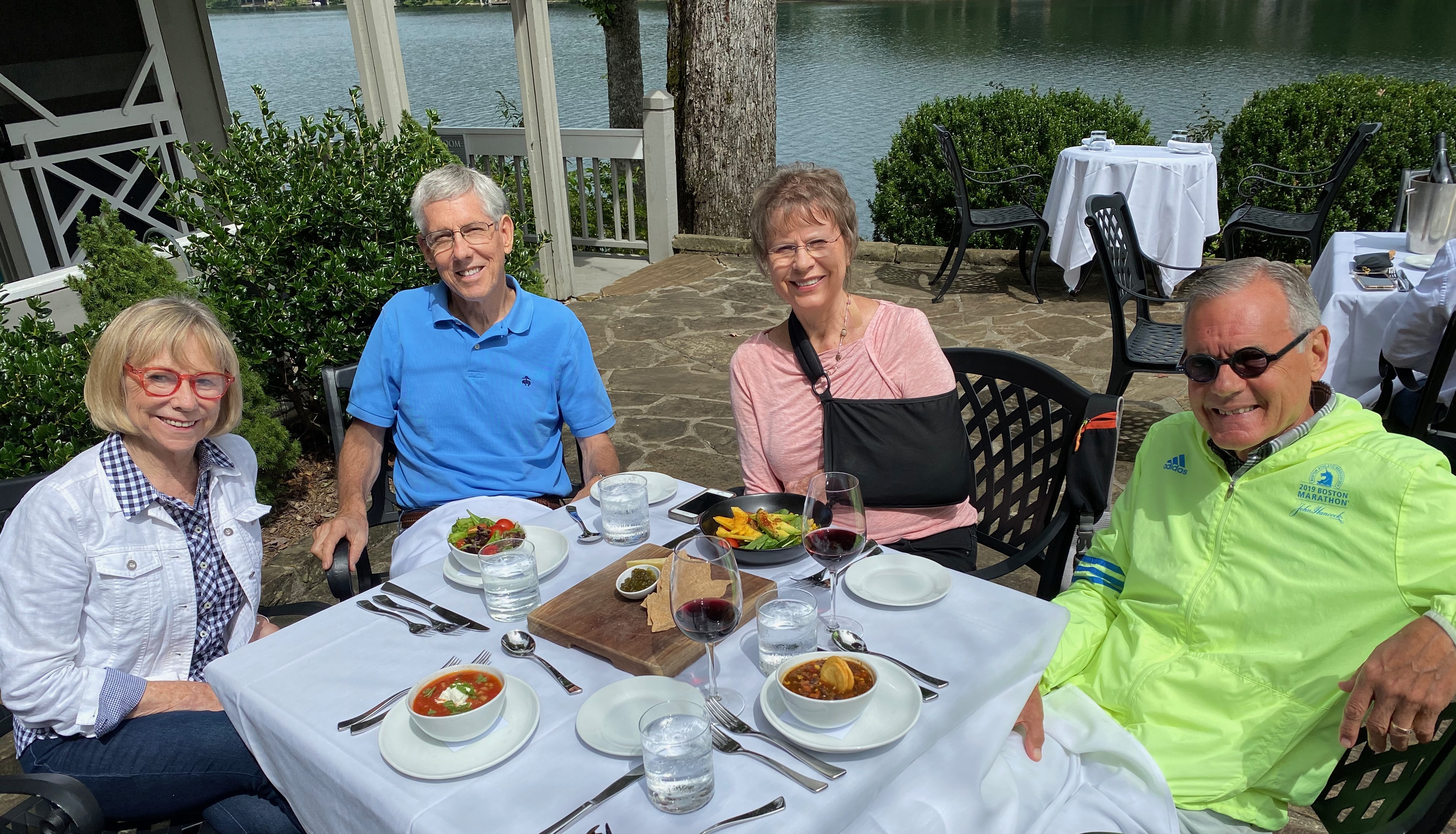 We had a wonderful outdoor lunch at the lakes edge. 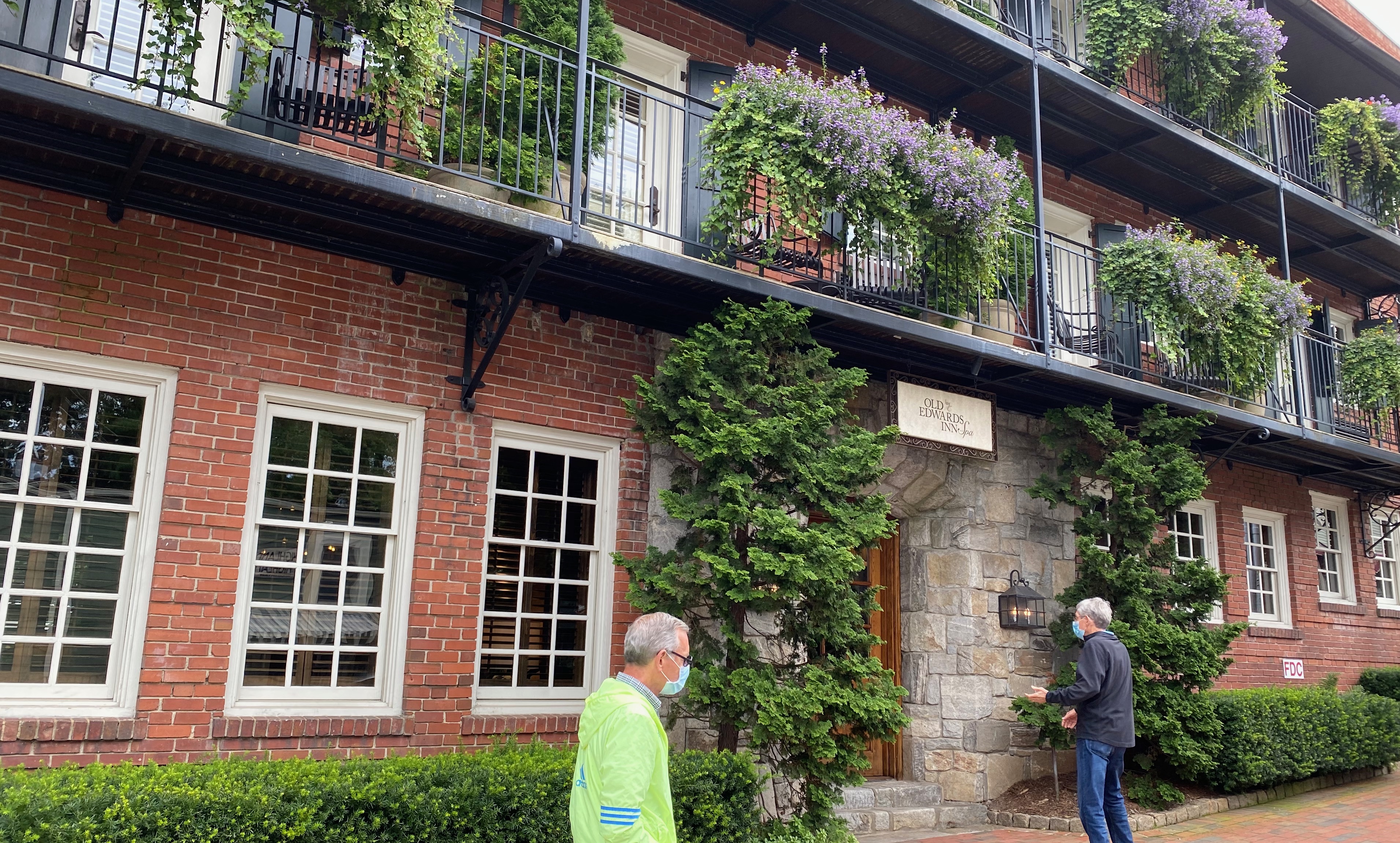 We had dessert at The Old Edwards Inn. 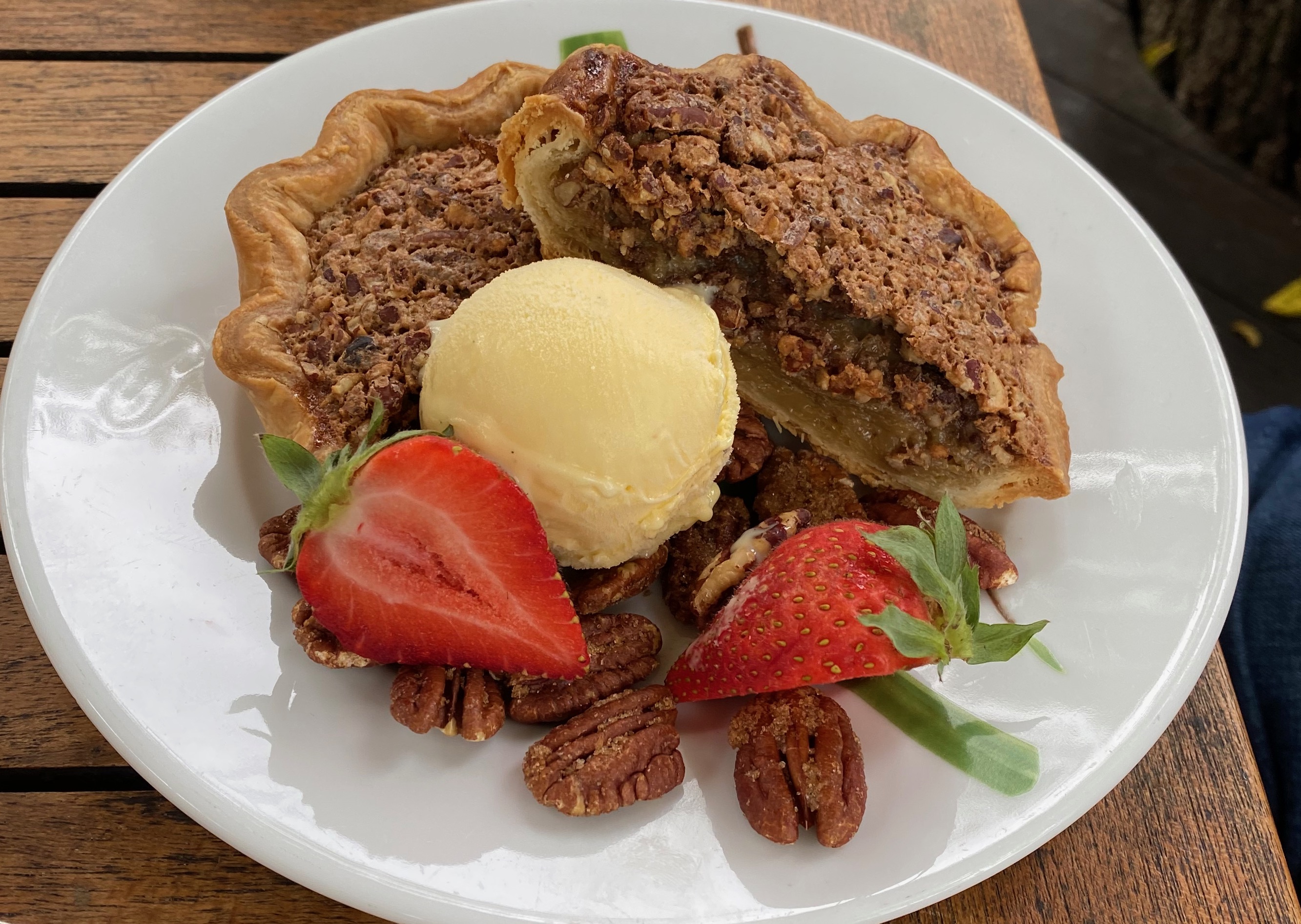 Bob’s massive pecan pie. No he did not finish it. 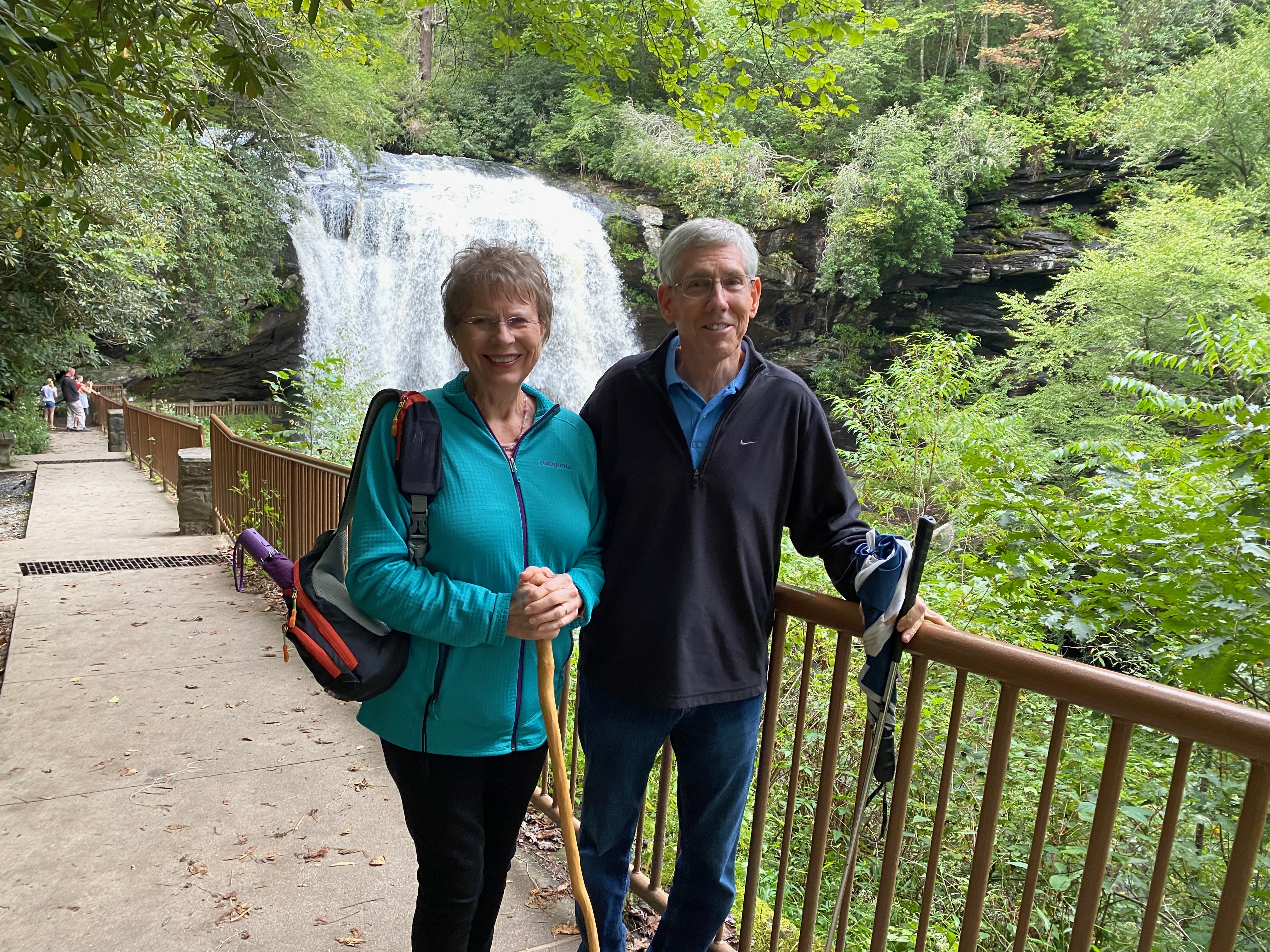 Not sure why it is called Dry Falls as it had an impressive amount of water the day that we visited. The path runs behind the falls.

Our last full day in Asheville, Jim had an outdoor lunch in the rain with his good friend Leon Elliston who is a college and medical school classmate. 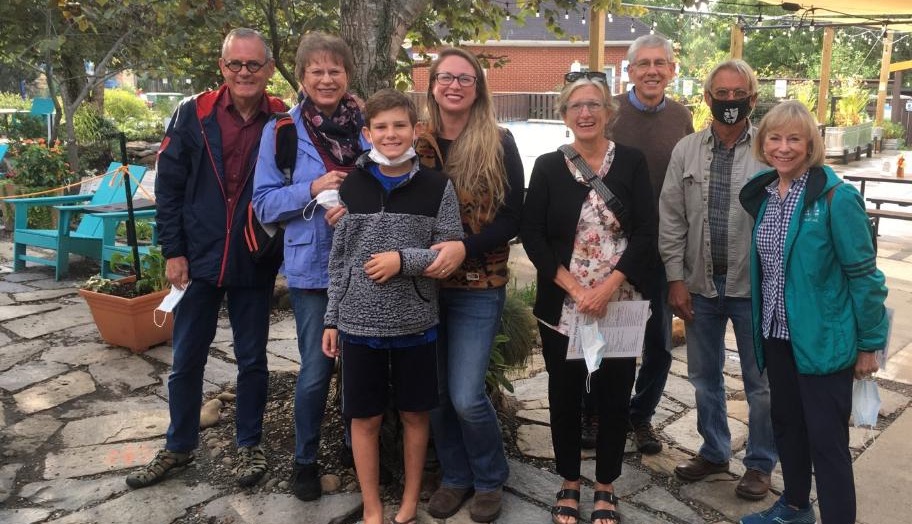 Last breakfast with friends and family at Sunny Point Cafe in West Asheville.

We had a great time in Asheville hanging out with friends and family.  We did not get to see enough of Geoffrey and his family as they came down with mild cold symptoms the last week and we felt that it would be safer to stay away from them.  Many thanks to Bob and Gail for being such great hosts and putting up with house guests for two weeks.