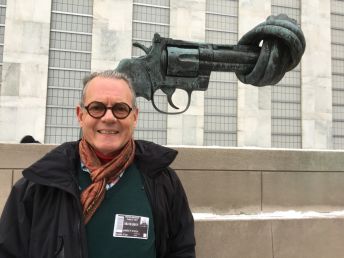 In front of the UN

Security Council of the UN

Speaking to the general assembly

So we are into our fourth week of living on the upper west side of New York City and just loving it.  We took the free Staten Island Ferry to the island to actually see it for a change rather than to run away from it as we have done in the past while participating in the New York City Marathon.  After arriving at the Staten Island Ferry Terminal we took the free train to the New Dorp station where our nephew Peter met us and walked us to his apartment where we had cocktails prior to driving to one of his favorite restaurants, Lakruwana, which serves Sri Lankan food.  We had a great meal of a new ethnic food for us.  We will definitely try Sri Lankan again.  The next morning we met with our prior colleagues Christina Larson and John Kelly from Winchester MA for a three hour breakfast.  They are the people responsible for pushing us into actually starting this blog.  We may or may not thank you guys sometime in the future.  Later the same day we took the subway to SOHO and had dinner with our Boston friend Donna Quirk at her daughter Carolyn’s place.  Her brother Mark and his wife were there also along with her son and Carolyn’s boyfriend Justin.  Mark fixed a wonderful meal for all of us.

The following day, Friday, we visited Grand Central Station and had some hot soup & chowder at the huge, busy, very loud Oyster Bar Restaurant before perusing the Christmas Market.  We then walked down 42nd street to the UN for a guided tour.  We arrived just in time for the start of the 2:45 tour and joined a family of four Israelis who are living in New York.  The tour guide was Brazilian but had also lived and studied in Tel Aviv.  We obtained a few recommendations for Tel Aviv from them.  The tour was quite informational and we were able to enter the security council and the general assembly.  Most tours are not allowed to approach the podium of the general assembly, but since the 11 year old boy in our tour group asked if we could go behind the dias a nearby security guard allowed us to not only approach the podium but go onto the stage and stand behind it.  After the tour we walked about 20 blocks down Lexington Avenue in a light snow for dinner at a French Restaurant, Sel et Poivre.

14 Replies to “Another week of our life”