Holidays can be a hard time to be away from home; away from familiar routines, away from familiar foods, away from friends and most of all away from family.  Our prior life of Jim working nights, weekends and holidays makes the transition to the expat holidays much easier as we have never had a set routine for any holidays as they have varied a lot over 40 years of that lifestyle.  In addition our extended family has been spread across the country for many years and it is the rare occasion for them all to be together for any event.  We have also encouraged our offspring to establish their own family traditions and we would just fit in whenever able and where it was comfortable.  This year in Rome our plan was to spend Thanksgiving with our expat good friends and ex-neighbors Henry and Andrew.  In addition two of our good friends from Boston Rebecca Yang and Adam Caper had decided to join us in Rome as Thanksgiving day was Adam’s birthday this year.  Unfortunately Andrew had to return to Boston to take care of some pressing business so he was unable to join us.  Henry arrived in Rome on Monday November 19 and Adam arrived the next day.  Rebecca worked on Wednesday and arrived at 7am on Thanksgiving morning.  After Dick’s (aka Henry) arrival on Monday we had lunch and then walked to the nearby Basilica Papale di Santa Maria Maggiore which we have all visited but we were interested in a tour that they advertised.  The tour took us upstairs over the entrance and into one additional room with a Spanish tour guide who had a warped sense of humor.  The tour did not live up to our expectations and we would not recommend it.

Adam arrived early Tuesday morning and while he slept we went walking with Dick, heading out with no clear agenda in mind.

As we were headed to Capitoline Hill we passed a museum with a Warhol and Pollock exhibit and decided to go in and view it.  Jim was initially somewhat reticent as we had visited the Warhol museum in Andy Warhol’s hometown of Pittsburgh on our road trip in March of 2017 but after touring the exhibit even Jim was delighted as it was honoring the 90th year of his birth and was an excellent summarization of the life of an artist who has changed the ways of seeing not only art but also music, fashion and cinema. 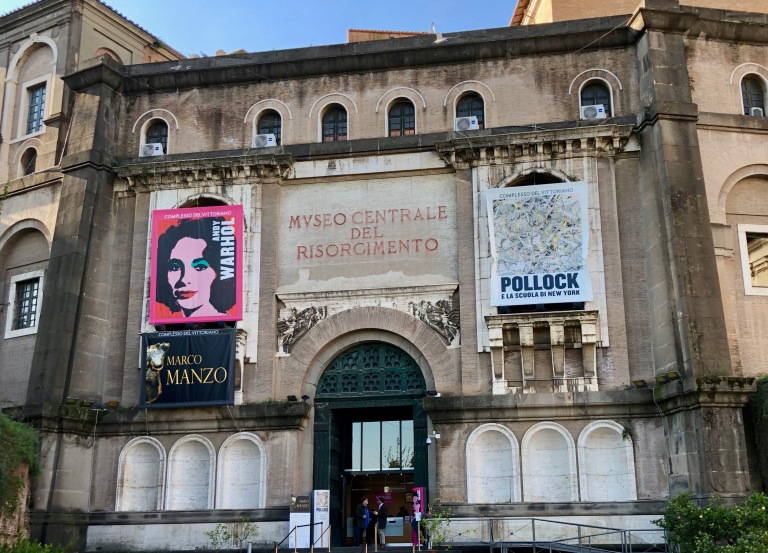 The Jackson Pollock exhibit was also very well done and we enjoyed it even though we are not into modern art.

As we came to the top of the stairs we noticed some police activity and a red carpet laid out in the street and decided to wait and watch.  From what we have pieced together later we saw the Mayor of Rome welcoming Qatar’s 38 year old Emir who is the most powerful person in Qatar.  His name is Sheikh Tamim bin Hamad Al Thani.

We had all wanted to visit the Basilica di Santa Maria in Ara coeli al Campidoglio which interprets to Basilica of St. Mary of the Altar of Heaven on Capitoline Hill but we had never made it up the stairs until now.  This Basilica has a very plain facade as it was never finished.

After our visit to this unremarkable Basilica we walked to the Jewish Ghetto and had lunch and waited out a fairly severe thunderstorm before taking a taxi home.

Adam’s first full day with us was Wednesday and we visited Castel Sant’Angelo where we traveled back to 125 AD discovering this astonishing Papal Palace and mausoleum of Emperor Hadrian.  This is a towering cylindrical building that was built as a tomb, not a castle.  In 139 AD it held the ashes of Hadrian and subsequent Roman Emperors until becoming a fortress in 401.  In the 14th century a fortified corridor between the castle and St. Peter’s Basilica was built and the building became a Papal Residence.  During our tour we met a newly married couple from Brazil who had already had an audience with the Pope and as we arrived at the top we witnessed a proposal and acceptance of an engagement ring by a young Polish couple.  It was very special to have interacted in these young peoples lives at a momentous and unforgettable time.

On the walk home Jim, Sandy and Dick took a detour to visit San Pietro in Vincoli (St. Peter in chains) which is home to Michelangelo’s dramatic Moses and also the chains which bound St. Peter while he was a prisoner in Jerusalem and another set which bound him in Rome.  According to legend the two sets of chains miraculously bound together when they were laid side by side.

Rebecca arrived on Thanksgiving morning and slept for a few hours while we and Dick walked to Trastevere for coffee and a visit to the Botanical Gardens.

The gardens were really unimpressive and quite small given the other beautiful Botanical Gardens that we have visited.  It is probably at its worst in December though.  The gardens are situated at the base of Janiculum (Gianicolo in Italian) which was our next destination involving a steep hike to the top of Rome’s second highest hill but not one of the seven original hills as it lies west of the Tiber and is outside of the original old city.  We were rewarded with beautiful views of Rome’s domes and bell towers and also a beautiful fountain and villas that house ambassador’s, Embassies, Academies and Universities.. 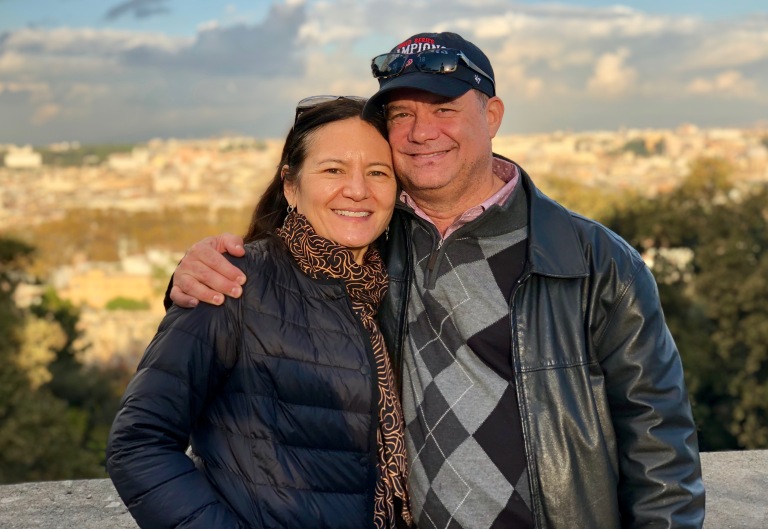 We taxied home to freshen up for our Thanksgiving dinner together at Brunello Restaurant in the Regina Baglioni Hotel.  We had done a lot of online and in restaurant research on where to have a traditional Thanksgiving meal in Rome and this was the best that we came up with in central Rome.  They served a fixed price, fixed menu catering to American Thanksgiving complete with US flags on all the tables.  Cocktails and appetizers were great but the main course and deserts were quite disappointing, no one finished either course.  The evening was still quite memorable just to be able to share Thanksgiving in Rome with our very dear friends although Andrew was sorely missed.  The day after Thanksgiving we walked to Aventine Hill with Dick to explore Piazza Malta which abuts the grounds of the Sovereign  Military Order of Malta.

There is a keyhole through their gate through which one can view St. Peter’s Basilica.  While standing in Italy, looking through the sovereign territory of the Knights of Malta across Italy and into Vatican City you are seeing three separate countries through the one keyhole.  We were able to see St. Peters but we were also looking through a tall step ladder which was partially obstructing our view.

Dick suggested that we visit the Non-Catholic Cemetery for Visitors in Rome as he had been there and found it quite interesting.  It is on the other side of Aventine Hill in the Testaccio district which we had not been to.  The cemetery did prove quite interesting as we spent at least one hour there before going in search of lunch.

Rebecca and Adam took us out to a very fancy dinner at Imago in the Hassler Hotel at the top of the Spanish steps to celebrate Adam’s birthday without Thanksgiving competition.  We had a great view, great food and great company.  Thank you Adam and Rebecca.

Our last big adventure of the week was to attend a rugby game at the Olympic stadium which had been suggested by our friends Sue & Helen from New Zealand as Italy was playing against the best team in the world at the present time, the New Zealand All Blacks.  The game was a rout as Italy was only able to score three points and New Zealand was able to score at will.

We walked the three miles home stopping for drinks at The Stravinskij Bar in the Russian Hotel and then going for dinner.

Rebecca and Dick both left on Sunday and Adam stayed until Tuesday.

On Sunday we went to see the movie Widows with Adam and Monday morning we met him at St. Peter’s Basilica and climbed to the top of the dome.

6 Replies to “Thanksgiving in Rome”